Mobile gamers can be insatiable. And that appetite is the key challenge for developers trying to maintain momentum for a popular app.

Nielsen, the intelligence firm that studies consumer media behavior, has released research that looks into long-term success of mobile games. The company has found that popular games — especially those that it describes as “big bang titles” that erupt onto the market in a flash — struggle to maintain a place at the top of highest-grossing apps chart. Instead, games like the strategy battler Clash Royale, the human-management sim Fallout Shelter, and even the location-based creature-catching adventure Pokémon Go often lose ground to established favorites in the $36.6 billion mobile gaming industry. Nielsen explains that the reason these new hits fall behind perennial attention-grabbers like Game of War or Clash of Clans is that developers are not prepared to keep up with the demand that players have for new content.

“The typical dynamic of a big-bang title involves high awareness before launch and fast adoption in the first few weeks after launch, or when awareness reaches critical mass,” reads the Nielsen report. “A period of declining satisfaction among the early adopters follows, and these players usually move on to the next big title or back to previous titles. Leaving with them is the buzz and excitement that started the momentum behind the title to begin with.”

Nielsen found that hunger for new items, characters, and quests in mobile games is nearly constant through the first six months of an app’s life. But that demand reaches a zenith in the first few weeks. 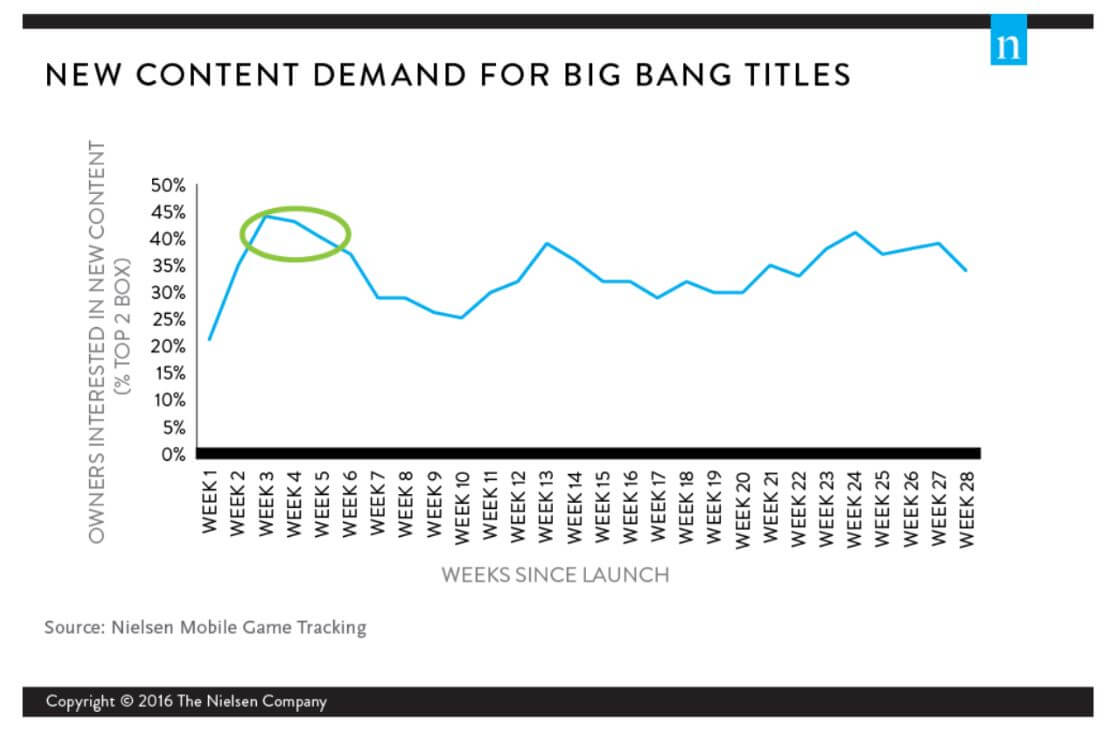 “In the majority of cases, new content demand among gamers reached a peak three-to-five weeks after a new title launched,” reads the report. “This plateau usually occurs when early adopters run out of content to enjoy or grow fatigued with the gameplay still available.”

This suggests that developers should have updates ready with plenty of new things to do within that first month. That’s crucial to keeping the most enthusiastic early adopters engaged, but it also present an even better first impression for people downloading the game because of word-of-mouth buzz.

“If developers can re-engage early adopters before they lose interest and switch to a different title, it can prolong the momentum behind mobile games and lead to more sustained acquisition,” explained the Nielsen paper.

You can see that something like Pokémon Go, which surged in popularity faster than developer Niantic ever expected, has lost a huge number of its players since launching in July. According to the Nielsen research, you can point to a lack of meaningful content updates as a major reason why that game has lost most of its buzz. At the same time, Clash Royale recently rushed back to the top-grossing spot on iOS and Android after developer Supercell launched an update with new cards and abilities.

In a competitive marketplace like mobile gaming, having a strategy to keep players around once they are engaged is crucial to avoiding the high costs of player acquisition and advertising.