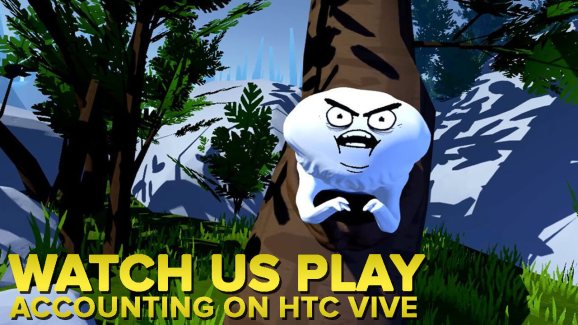 Accounting isn't what it seems to be.

Accounting is a new free VR game for the HTC Vive. It is out now on Steam, and you can play through it if you have the SteamVR-powered headset. This is the first VR project from Justin Roiland, the creator of the Adult Swim dimension-traveling animated comedy show Rick and Morty. His studio Squanchtendo partnered with Crows Crows Crows from designer William Pugh who worked on the mind-warping exploration game The Stanley Parable. The end result of that collaboration is an interactive Twilight Zone-like that requires you to blow up bombs, murder, and die several times to escape.

More than anything, Accounting feels like an episode of Rick and Morty. That comedy has the titular Rick guiding his grandson Morty through wacky circumstances throughout multiple dimensions. In Accounting, the major difference is that the batshit characters and situations you’re encountering live in various VR layers within layers. The game also only takes about 20-to-30 minutes to get through, which is about the length of a Rick and Morty episode. Accounting also echoes Roiland’s show in terms of its humor. You should come to this experience for the goofs. Roiland, Pugh, and their friends nail the jokes with their voice acting, and it’s wonderful to have these terrible asshole characters shouting obscenities and nonsense at you.

And what this really makes me want is a monthly anthology VR game that delivers a new 30-minute experience every month. Accounting shows what that might look like, and I hope it leads to something more.

For now, however, you can watch us play Accounting for the HTC Vive below: