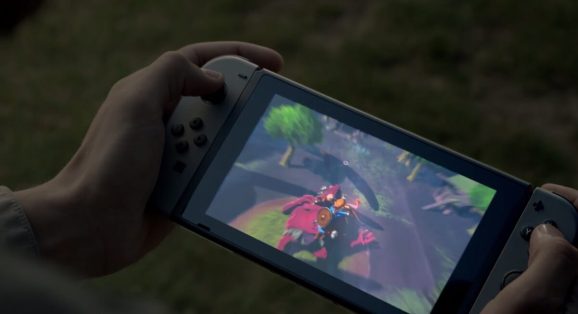 A demonstration of the Switch playing The Legend of Zelda: Breath of the Wild.

A short video from the Japanese company has revealed its new system, the Nintendo Switch (formerly known as the NX). It is coming March 2017.

Rumors had suggested for years that the system would be a hybrid between a home console and a portable and that it would have replaceable sides. It looks like that scuttlebutt is true. The trailer started with showing what was the only known NX game, The Legend of Zelda: Breath of the Wild, easily transferring its action from the TV to the portable display. We also got a look at a new Mario game and what appeared to be The Elder Scrolls V: Skyrim (an open-world role-playing game) running on the new system. We also saw Splatoon and Mario Kart in the trailer.

The trailer was a departure for Nintendo, which usually focuses on families and kids in its marketing. This reveal showed young adults using the Switch, both at home and on the go. It also ended with a stadium at an esports event, showing that Nintendo isn’t completely oblivious to all trends.

This is Nintendo’s first new system since the Wii U, which launched in 2012. The Wii U tried to stand out with a tablet controller, but the gimmick failed to excite most gamers. The console has only sold 13 million units, severely lagging behind its predecessor, the Wii. That system sold over 100 million units.

The disappointment of the Wii U forced Nintendo to make some changes. As well as Switch, the company has entered the mobile gaming world. Its first mobile release, Miitomo, came out in March. Super Mario Run is scheduled to release for iOS in December.

Like the Wii U, Switch will have to compete with the PlayStation 4 and Xbox One. Both of those systems are receiving upgraded versions in 2017 via the PlayStation 4 Pro and Xbox Project Scorpio, which are targeting 4K gaming. Nintendo hasn’t tried to beat its competitors in the specs game for decades, instead relying on innovations (or gimmicks, depending on who you ask) like the Wii’s motion controls or the 3DS’s glasses-less 3D display.

Nintendo also leans on its stable of classic franchises, including Mario, Pokémon, The Legend of Zelda, Metroid, Kirby, and … well, it just goes on. No other company can boast a better stable of game series. We already know that The Legend of Zelda: Breath of the Wild will launch with the Switch, and it looks like Mario could be there for the party too.