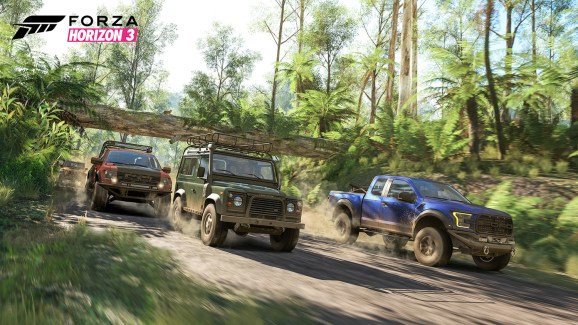 Forza Horizon 3 was a big winner for Microsoft.

Digital athletes were a bright spot for a shrinking industry.

The U.S. gaming business generated $838.2 million last quarter, according to industry intelligence firm The NPD Group. That is down 23 percent from $1.09 billion during the same period in 2015. Hardware and software were both down significantly even as Microsoft and Sony both had new hardware revisions on the market.

NPD tracks U.S. game revenue from retailers and some digital stores (Xbox Store, PlayStation Store, and Steam). But when it comes to digital, NPD only gets data from participating publishers. With that in mind, understand that this is a glimpse into a larger and more dynamic market, but it’s a snapshot that provides valuable data for the companies that make games.

“Spending on software, hardware and accessories declined by 23 percent compared to this time last year,” NPD analyst Sam Naji said. “The release of the PS4 Slim and the second month of the Xbox One S was not enough to stimulate total hardware spending.”

It’s not really a surprise that hardware spending was down considering that both Microsoft’s and Sony’s systems are significantly less expensive than they were in 2015 (not counting the Xbox One S). Microsoft also recently confirmed in its quarterly financial report that the lower average sales price of the Xbox One led to a 5 percent year-over-year decline in revenues for its gaming division throughout the last quarter.

When it comes to software, the industry had a tough year-over-year comparison to September 2015.

But despite the weaker 2016, we still have a sales list to get through.

“Software spending declined by 21 percent to $473 million,” said Naji. “The month was strong in new releases of sport games and although NBA 2K17 outperformed last year’s NBA 2K16 in dollar revenue for September, other new sport games, FIFA 17 and NHL 17 both underperformed in dollar sales compared to their predecessors.”

But what’s really strange about this list is that Minecraft isn’t on it. That’s the first time in quite some time that the block-building phenomenon has fallen out of the top 10. This doesn’t mean the fad is over, because many of its sales were likely included as part of the new Xbox One S Minecraft bundle.

Forza Horizon 3, meanwhile, was the top-selling console exclusive, but that only landed it at No. 9.

Xbox One outsold the PlayStation 4 even though Sony had the new slim version of its home console.

“September 2016 saw the release of the PS4 Slim,” said Naji. “Only one SKU launched: PS4 Slim 500GB Uncharted 4: A Thief’s End, and for the month it was the third best-selling hardware SKU.”

Microsoft, however, had a strong month.

“The Xbox One brand was the best-selling hardware for the month and accounted for 37 percent of all hardware units sold,” said Naji. “This was not enough to counter a revenue decline in total hardware. Due to average retail price declines for consoles and a decrease in hardware units sold for the PS4 and the Wii U, total hardware dollar spending declined by 25 percent since September 2015.”

Nintendo saw some more growth in September as well. And, yeah, it’s because of that little mobile game that blew up over the summer.

“The 3DS experienced its fourth consecutive month of increased hardware unit sales compared to last year,” explained Naji. “Since the release of Pokémon Go, back in July 2016, the 3DS has experienced a resurgence in hardware spending.”

The toys, which include Nintendo Amiibo, Lego Dimensions, and Skylanders. But they only generated $13 million, which is 75 percent less than September 2015.

“Last year, Lego Dimensions launched, Skylanders: SuperCharges released and there were 13 new amiibos,” said Naji. “This year the new Skylanders accessory, Skylanders: Imaginators, is expected to release in October 2016 and no new amiibos launched in September 2016.”