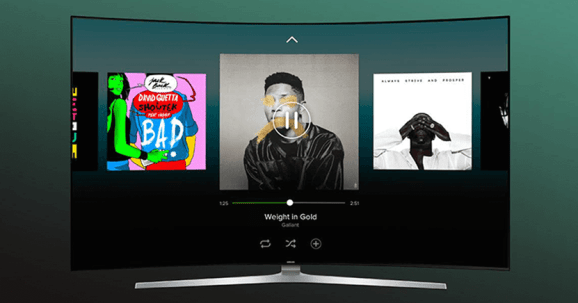 Spotify has announced that free users will have full on-demand access to the music-streaming service on Samsung’s smart TVs for the first time.

So far, one of the perks of being a $10/month Spotify subscriber has been things like offline and ad-free access to on-demand music across all platforms. Up until now, free users have been able to access on-demand music through the web and tablets, while those on mobile phones could only access shuffle mode rather than play what they like. Samsung Smart TVs, on the other hand, have often offered free trials to entice people to sign up, but other than that, big screens have largely been limited to paying members, though Android TV is one notable exception as of May 2016.

The “new and improved Spotify experience” will be better optimized for the big screen, according to Spotify, while it also ushers in support for Spotify Connect, meaning you can control the interface using your smartphone. But arguably the bigger piece of news here is that Spotify is opening unlimited, on-demand access to all members.

Free listeners will still, of course, have to put up with ads, but this represents a notable evolution for a music-streaming service that has been criticized for its free tier in the past — the argument being that ad-supported music doesn’t properly recompense artists and devalues their work.

Rumors continue to circulate that Spotify is considering placing some restrictions on its free tier in the future, but if today’s news is anything to go by, the company isn’t planning on ditching its free tier anytime soon. If anything, it’s looking to expand its free offering, and to shoehorn more users on the premium tier.

It’s worth noting here that the new Samsung TV app will only be available on Tizen-powered TVs produced after 2015 — older models created from 2012 to 2014 will still be limited to premium members.