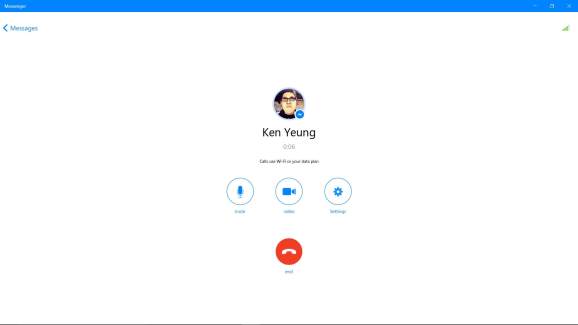 A voice call in Messenger for Windows 10.

A Facebook spokesperson confirmed that the company started rolling out the feature last week.

Just like on Messenger for Android and iOS, the phone icon in the top right corner of the screen in the Windows 10 app during a chat glows green when the other person is currently active, so you know you can reach them immediately.

When you start a call, the app informs you that “calls use Wi-Fi or your data plan.” That’s odd, because generally your Windows 10 PC doesn’t have a data plan. Your phone does.

Nevertheless, this is a welcome addition to a typically very stable native Windows app. Until this point you had to leave Messenger for Windows 10 and go to Messenger.com or Facebook.com anytime you wanted to make voice or video calls. Now you don’t need to switch to a browser and open a new tab only to close it when you’re done with a call.

VoIP calling is a big deal at Facebook in general and Messenger in particular. In July Facebook said 10 percent of all VoIP calls go through Messenger. And last month Facebook said that of its billion-plus monthly active Messenger users, more than 300 million of them are voice and video callers. (Facebook-owned WhatApp, for its part, was supporting more than 100 million calls per day as of June.) So making these services available across all the important platforms makes sense.

Unlike Messenger for Android and iOS, the Messenger desktop app doesn’t give you options to set a reminder or send a message to the other person when a call is coming in. But you do get a native desktop notification when you have an incoming call. And if the other person doesn’t answer your call, you can leave a voicemail, as you can on other platforms.

Once you’re inside the call, you can choose which camera to use, and of course there are the usual buttons to mute yourself, enable video capture, and hang up. There’s also a graphic with a number of green bars symbolizing network connectivity.

And just as Facebook does in Messenger for Android and iOS, Messenger for Windows 10 asks you to rate the quality of each call after it ends. You can choose to hit “Not Now.” But if you provide a low enough rating, Facebook will let you show you a list of problems to choose from, as it does in Messenger’s mobile apps.

Group voice calls are working, but not group video calls.

“Currently, the Windows Phone app does not have voice and video calling,” the spokesperson said.