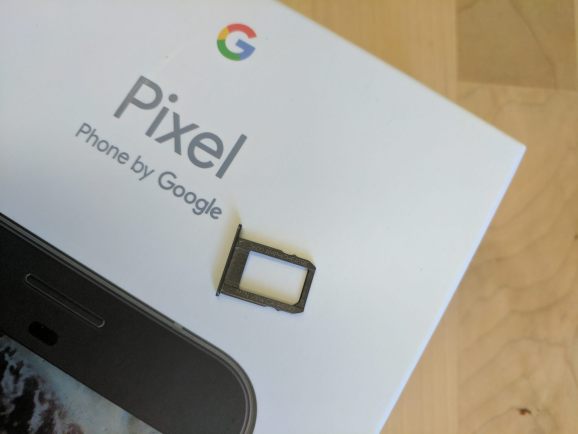 If you just received your Google Pixel or Pixel XL this week and rushed to activate it — as I did — you may or may not have noticed a quirky detail on the hardware itself.

The SIM tray for each phone is detailed with the address of Google headquarters, a.k.a. the Googleplex — 1600 Amphitheatre Parkway, in Mountain View, California — as noted today by Android Police. The Parkway part is left out, and the Mountain part is abbreviated as Mtn, presumably for lack of space.

It’s on the back of the SIM tray, so it’s not necessarily the easiest thing to spot. But, at least in the Quite Black Pixel and Pixel XL models that I have here, the light gray color of the text does stand out from the black background more than the dark gray text on the bottom of the phone on the back that reads: “Phone by Google” and “Made in Taiwan.”

Does Google need to do this? No. But remember, this phone is historic for Google. Google is making the most of it. It’s not like Google engraved team members’ signatures into the case of the phones, as Apple did with the original Mac in 1984.

But this is arguably more appropriate for Google — Google Maps is one of the Google apps that have accumulated more than 1 billion active users, and a reference to a specific place here aligns well with Google’s intent to make this the best of Google, while the Nexus devices were meant to showcase the best of Android. And yes, it is more particular than the “Designed by Apple in California Assembled in China” tagline that you see on iPhones. We’ll have to wait and see if Google keeps this tradition going for future Pixel phones. Perhaps we will only see an update after Google moves into its swanky new headquarters.