By all accounts, the Google Pixel and Pixel XL smartphones ought to have every mobile phone manufacturer quaking in their boots.

Reviews of the new Android phone have been mostly positive. There are some that dislike the way Google Assistant works, and there’s no doubt that Google’s messaging apps are in a state right now, but those are software issues and — therefore — fixable.

But Pixel won’t rule the world the way it should. It can’t. Why? Google can’t afford it to succeed, and the company keeps making the same mistakes with its hardware, again and again.

First, let’s put this on record. I’m a fan of Google’s smartphones. I’ve owned every Nexus. I’ve evangelized about them so much that Google ought to be paying me a commission (which I’d refuse, of course).

But let’s take a walk through the Nexus’ history, and I’ll point out Google’s missteps along the way.

While the glass back was as fragile as Donald Trump’s ego, the Nexus 4 was a device that rivaled the latest and greatest smartphones in the industry, only at half the price. It could have ruled the world if the highly shatterable rear had been better designed and if Google had been able to ship the phone in any large numbers.

The Nexus 4’s distribution was plagued with delays and setbacks. Devices started appearing on eBay at prices equivalent to a small car and every time a new batch became available, there was a mad scramble to get an order in the system before they disappeared again.

Back then, you could access devices from the regular Google Play store, but only if you used a desktop browser (or if you forced your mobile browser to serve the desktop page). At no point in time has Google allowed smartphone users to buy more devices or accessories from Google Play using the app on the phone itself, and that is a misstep in my books.

Why can’t I purchase a tablet from my phone or a smartwatch in the Play Store app? Why can’t I buy a case or a charger? I can’t think of a regulatory reason for this idiocy, so what’s the problem?

The Nexus 5 was an altogether more civilized affair. It was typically in stock, but it never shipped in any large numbers. The switch from the Nexus 4 to the Nexus 5, however, gave us a look at misstep number two – Google’s inability to support prior devices.

As soon as the Nexus 5 hit the store, you couldn’t buy a Nexus 4 from Google. Or a Nexus 4 case. Or a Nexus 4 accessory of any kind. This is a constant issue on the Google Play Store, which, for reasons beyond my comprehension, has now been split — hardware is now on an entirely separate URL totally disconnected from the Play Store itself.

That’s right. The Google Play store, where you buy or subscribe to everything else Google has to offer, can’t sell you its devices. Only digital products. There’s a separate store for everything you can actually touch.

The Nexus 5X and 6P saw a change in strategy from Google. Both devices were flagship quality, parallel to the latest and greatest from LG, HTC, Samsung, and Huawei, but both had higher price tags than the previously powerful yet cost-effective Nexus 4 and 5.

The continued lack of mass distribution, coupled with the change in strategy, suggests that Google never wants to sell too many of these phones while they are being manufactured by partners. In fact, I would expect that these hardware partners have had it written into their contracts that Google isn’t allowed to sell the devices in seriously large numbers, to help avoid competition with their own-branded phones.

Smartphone margins are scant enough, so diluting your hardware to take a share of a partner device is not going to be a viable strategy for anyone.

The price increase on the 5X and 6P helps maintain some parity there, which reduces the chance that the Google devices will undercut the manufacturers that make them.

Now, the Pixel and Pixel XL have launched. Has anything changed since the Nexus 4? Not really.

Distribution is slightly better since the supply issues of the Nexus 4, but it would appear that – by design, contract, or through an inability to learn from its mistakes – Google isn’t setting itself up for success in hardware, yet again.

And the Store itself is still a mess, not just for Pixel phones, but for everything Google supplies.

For example, the Android Wear section offers a glimpse of all the devices you could own in the glorious header photo, but when you look at the available options, you’re left with a limited choice. Want accessories for that watch you bought? Good luck. You’ll be lucky to find a replacement charger. 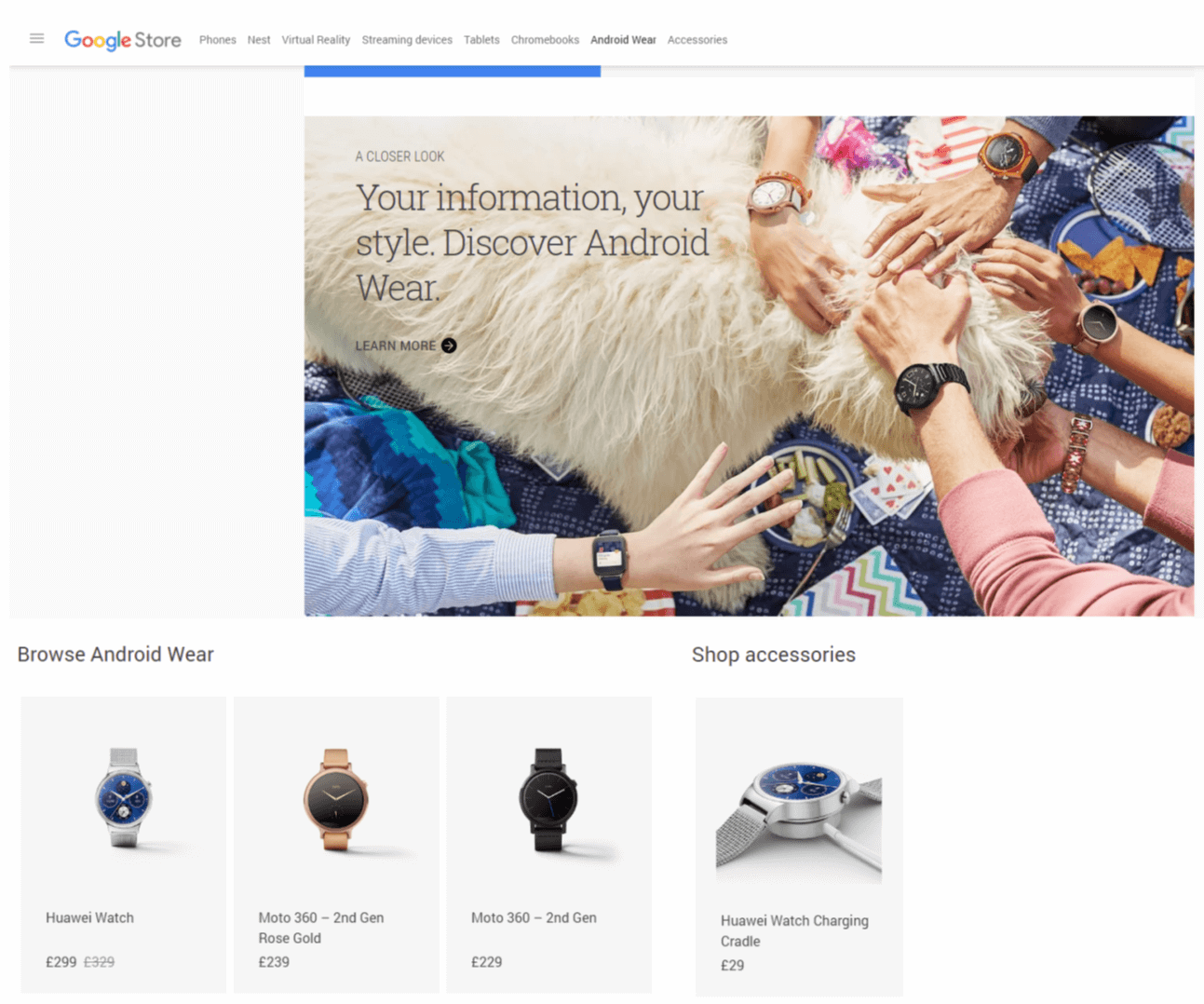 Above: A composite image showing the Android Wear dream, along with the two devices on offer (2X Moto 360’s and a Huawei) and the one accessory (UK store)

If you need something to support your existing 5X or 6P, don’t come to Google either. You won’t find anything there. Google’s lack of commitment to any previous incarnation of its phones, tablets, smartwatches, and more is instantly apparent.

That reduces engagement with existing users and stops us from coming back. Sure, most users — especially those without an existing Android device that have been wooed by the reviews — will simply Google “buy Pixel” and be sent to the right page, but for those of us that bought via Google in the first place, the lack of continued support sets a worrying tone.

Then there’s the lack of global distribution to take into account. If you look at Google’s device stores across the world, you see massive differences in offerings, prices, and product availability. Of course, Google is nowhere near as bad at launching outside of the U.S. as Amazon, who typically takes 11 months or more to distribute to other regions — as seen with the Fire tablets, phone, and recently, the Echo — but Google still has improvements to make in this crucial area.

And the last misstep? You can see a massive disconnect between hardware divisions in something as simple as the colors, finishes, and options available across products that are supposed to inhabit the same ecosystem. Why launch a phone in shiny black, silver, and blue, then a VR headset in fabric gray with future options for red and white, and a Google Home assistant that comes in none of those colors? Where’s the continuity?

I want Pixel to rule the world. It should. Google has created a great phone, and while the price tag is comparable to other top-end devices and it’s not the absolute steal the Nexus 4 and 5 were, the Pixel and Pixel XL should be standing on top of the podium right now.

But until Google either manufactures the phone itself (which it could have done if it hadn’t sold Motorola off), or until it fixes its distribution issues or loosens the contractual shackles, that won’t happen. Until it has its hardware divisions talk to each other about continuity, and until it brings the hardware store back into the regular Play Store and makes it accessible from any device, it will continue to suffer.

But then, if it does manufacture a phone for itself and rules the world with it, Google still loses. Its partners will think twice about Android from that point forward (we’ve already seen movements from the likes of Samsung to push its own OS), and the 87+ percent share of the market it enjoys could start to fade.

So, don’t expect the Pixel to do well. It can’t. It has to lose by design. And that’s a shame.