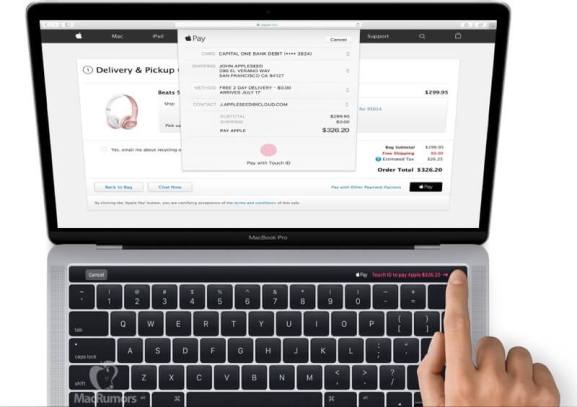 A leaked image of the MacBook Pro featuring the "magic toolbar." And no escape key.

Apple stock reached the highest point in the day — $118.36 — after the publication of leaked images of the next MacBook Pro, which is set to be released later this week.

The leak has perfect timing — it hit 43 minutes before the closing bell, after which Apple is expected to report lower revenue as a result of lower iPhone sales.

The images, which appeared on MacRumors, clearly show the “magic toolbar” that’s been rumored for the past several months. It appears to contain a fingerprint scanner that enables Apple Pay. Indeed, the images were found in Apple Pay images that were “hidden” in the macOS Sierra 10.12.1 release that went out yesterday, MacRumors said.

That the Mac will feature the fascinating component that earlier reports talked about could be a good sign of following through for Apple investors and spectators.

The keyboard itself looks like that of the 12-inch MacBook. Except there’s no escape key.

We’ll provide live coverage of the actual launch of the MacBook Pro on Thursday, October 27.