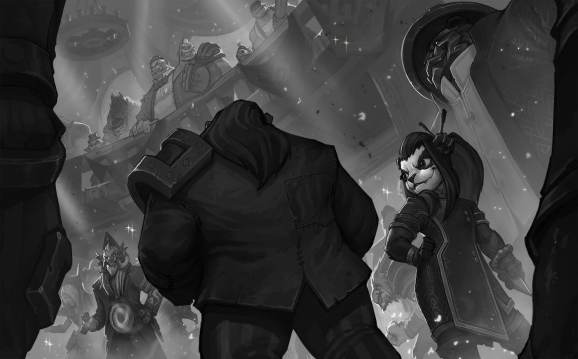 Something shady is happening at Gadgetzan.

Hearthstone: Heroes of Warcraft is doing an awful lot of teasing lately, and now the digital card game leader is using a Facebook Messenger chatbot to stir up even more speculation.

On Monday, the game’s Facebook page posted an image that said “Welcome to Gadgetzan.” Many speculate that this could be teasing Hearthstone’s next expansion. These are a big deal for the free-to-play card battler, as they add over a hundred new cards. This can help retain players and give them an incentive to buy new packs. These cards can also change strategies and fortunes for Hearthstone, the card game market leader that originally came out in 2014.

Today, chatting with Hearthstone on Facebook Messenger opens up a dialogue with a goblin named Talan, a bartender in Gadgetzan (a famous city from World of Warcraft). Talking with him unlocks images and details on recent events in the city, all seemingly teasing an upcoming Hearthstone expansion. This isn’t a new marketing tactic for publisher Activision Blizzard, which previously used a chatbot to promote Call of Duty: Infinite Warfare. Blizzard also released the front page of a newspaper for Gadgetzan, which (like the chatbot conversation with Talan) focuses on talk of the city’s bank.

A formal announcement is likely coming on November 4 during the opening day of BlizzCon in Anaheim, California, a fan event for all of Blizzard’s games. After the opening keynote, the first main stage event is called “The Future of Hearthstone.”

We asked Blizzard to comment on this chatbot and these teases, but the studio declined to give further details while promising that more info would be coming soon.

This would be Hearthstone’s fourth expansion and eighth new set overall. New cards for Hearthstone come via expansions and adventures, alternating between the two. Expansions add a lot of cards, over 100. Adventures include fewer, but also give players challenges against computer-controlled opponents with unique decks. The last Hearthstone set, the One Night in Karazhan adventure, came out in August. Blizzard usually releases new sets four to five months apart from each other.

This is Blizzard’s chance to adjust the game’s balance and try to make some of the weaker classes, like Priest, stronger. Right now, Hearthstone is deep into the Year of the Kraken of its Standard cycle. Blizzard has noted before that the first expansion of 2017 will start a new year for the Standard format, which excludes cards from older sets. So, depending on when the next expansion comes out, it could have an even bigger impact on the game than normal.