In the financial services industry, blockchain looms as a large but distant and somewhat mysterious presence. A few forward-thinking bankers take it seriously and are trying to figure out how to turn it to their own advantage. Everyone else has heard about it, knows little about it, and is taking a wait-and-see approach.

The one thing everyone seems to agree on: They don’t want to make the same mistake with blockchain that they did a decade ago with PayPal, which was to ignore it completely, wait for it to go away, and then get surprised when it grows up and becomes a threat.

Instead of a single company, blockchain is a whole category of technologies — a movement embraced by thousands of people and hundreds of companies. The threat is actually much larger than that posed by PayPal (which, after all, is just another kind of bank now). It’s just that few in the financial services industry quite know what to do about it yet.

That’s the message I took from Money 20/20, a conference focused on financial technology that’s taking place this week in Las Vegas. It was my first time at the event, which has grown to enormous proportions in the four years since it was founded: 11,000 attendees and more than 400 exhibitors filled up the Venetian and Sands conference facilities. At $3,000 per ticket, roughly, that’s a lot of revenue — even before sponsorships. No wonder the founders were able to sell the event to i2i a year ago for a reported $100 million price tag.

Most of the event was not focused on blockchain. The transition to EMT (chip cards) and mobile apps is far more top-of-mind for most bankers. But there were plenty of sessions featuring blockchain companies and discussions of the technology and its future.

Blockchain, the technological concept behind Bitcoin, is real. In many ways, its approach to storing data in a transactional database that is distributed across many machines is reminiscent of the cloud approach to computing. As Square CEO Jack Dorsey noted in his keynote at Money 20/20: Both are “distributed, redundant, failsafe, and ubiquitous.”

People talk about “the blockchain” but unless they’re referring to Bitcoin’s blockchain, there is not one single blockchain. Instead, each cryptocurrency or smart contracts platform uses its own blockchain. A “blockchain,” simply put, is a public, distributed ledger of transactions. Because it’s public, transactions can’t be repudiated and people can’t spend the same value more than once. The public ledger records it, and anyone can check it. Because it’s distributed (copies are maintained all over the internet), there’s no single point of control or failure.

And it’s quite secure — in theory. It’s worth pointing out, as several speakers at Money 20/20 did, that Bitcoin’s own blockchain has never been compromised in the eight or so years it has existed. Applications or exchanges that use Bitcoin have been compromised (and millions of dollars have been lost in the process), but the underlying blockchain has remained online, and intact, continuously. That might sound like a technicality to outsiders, but it is significant.

Above: Bitcoin prices in U.S. dollars over the past year.

In fact, Bitcoin itself appears to have matured somewhat. It is still a fairly volatile currency, so buy and hold it at your own risk. But as a medium for exchange, it seems to be working quite well. Sonny Singh of BitPay, which powers a huge proportion of Bitcoin payments around the world, told me that Bitcoin accounts for roughly 99 percent of the blockchain transactions market, despite the rise of alternative currencies. And many of BitPay’s customers don’t even touch Bitcoin at all; they just use BitPay as a payment processor, like Visa: People pay in Bitcoin, and BitPay clears the transaction and deposits dollars into the client’s account. Singh says BitPay’s volume of merchant transactions has tripled in the last year, to one transaction every 15 seconds.

So what does the future hold?

One thing we’re going to see is Bitcoin- and blockchain-based stock exchanges. For regulatory reasons, you can’t technically call them “exchanges,” but I don’t know what other word you would use for a place where you can buy and sell equities, like you can on T0. Overstock.com, an early Bitcoin adopter and the creator of T0, announced this week that it would start trading some of its stock on the T0 platform. (I wrote about Overstock’s plans yesterday.) The advantage: Trades can settle in 10 minutes, instead of 3 days, which is what it generally takes on traditional equities markets.

Is that a threat to traditional stock exchanges? Absolutely. “We’re taking a burn it down and start over approach,” said Judd Bagley of Overstock.com

Big banks are looking at blockchain for international payments. Visa announced a new product, called Visa B2B Connect, at the show. It’s powered by Chain, a maker of blockchain technologies. Details are fuzzy on how it works, but it is a custom blockchain network, operated by Visa, for corporate clients to conduct B2B transactions across borders.

It’s not just Visa: At least two-thirds of major financial institutions are working on blockchain-based products for deployment sometime in the next three years.

The potential here, of course, is cost savings. Most international bank transfers cost several percentage points of the total transaction value. If you use Western Union, be prepared to pay up to 8 percent. PayPal itself is about 3.5 percent. A blockchain-based transaction system could be much, much cheaper. (BitPay, for instance, charges just 1 percent for any transaction anywhere in the world.)

Companies are working on tying together different blockchains. As I mentioned earlier, Bitcoin isn’t the only blockchain out there. Ethereum has sprouted up as a significant alternative, although most people are looking at it as a tool for enabling smart contracts, not just currency transactions. And many other cryptocurrencies exist. How do you facilitate transfers of value between different blockchains? Right now, you need to use an exchange, which is a clearinghouse using some intermediary currency or store of value. A better approach would be to establish some kind of protocol that allows blockchains to talk directly to one another. Ripple has created one such protocol, the now-open-source Interledger Protocol. But others are certainly in the works. Whoever can decisively solve this ledger interconnection problem will have accomplished something comparable to the invention of TCP/IP — the foundation of the internet.

Above: Ethereum founder Vitalik Buterin on stage with author Don Tapscott at Money 20/20.

Ethereum is still a work in progress, but Ethereum founder Vitalik Buterin is clearly a genius. He’s also very young and sort of awkward. And despite the scope of his ambitions, he’s fairly modest about how far Ethereum has come so far. In an onstage chat with author Don Tapscott, Buterin was sanguine about the controversial patch he made to Ethereum in order to reverse the weakness that allowed someone to hijack $50 million of a decentralized $160 million investment fund called the DAO. Critics viewed that as an assault on the immutability of the blockchain, thus compromising the trustworthiness of the Ethereum system. But for Buterin, “immutability is not absolute,” and it needs to serve a social purpose. At present, the need to evolve Ethereum is a greater good than the need to preserve its blockchain unchanged, he said. Ethereum will eventually mature, he said, but “until then, it should be viewed as an evolving ecosystem, not a fixed work of art.”

Governance is a grey area. Buterin seems to be coming around to the idea that some kind of governance — by groups of people working together — is necessary in any system. You can’t just create the perfect protocol and assume that it will take care of everything from that point on. Politics are necessary and unavoidable, he acknowledged. Like others in the blockchain space, he is coming up against the real world, one in which regulators may eventually catch up to what’s going on and impose real restrictions.

What’s more, it’s important to note that anonymity is not one of the essential properties of blockchain transactions. In fact, the immutability of transactions in blockchains works against anonymity, as the operator of the Silk Road, Ross Ulbricht, discovered to his regret a few years ago. The blockchain is a paper trail. That cuts in multiple directions, as Jamie Smith of The BitFury Group pointed out in one panel: “If you have an immutable record, authoritarian governments might find that very interesting, too.”

Still, while regulators around the world are generally far more enthusiastic about blockchain than they were about earlier cybercurrencies (like E-Gold), there will come a time when the world’s financial regulations start to impinge on the blockchain world. Operators of cross-border transaction platforms, for instance, will need to provide the same assurances as banks do that they’re not being used for drug deals, money laundering, and so on. At least, they will have to do this if they want to remain operating within the law.

The opportunity is huge. “Every 20 years, something really cool comes along, and this is it,” said BitFury’s Smith. In the next few years, everyone on the planet will have some kind of mobile device. And there will be some kind of ubiquitous, planet-wide internet access. Combine those two things, she said, and why wouldn’t the world gravitate toward fast, convenient, low-transaction-cost payments?

As for Bitcoin itself…who knows? One panelist, Eric Martindale of Blockstream, predicted that Bitcoin would increase 10x in value, to more than $6,000, in the next 12 months. (The current value of Bitcoin is about USD $653.) I don’t know if he was joking, trying to hype the value of his own holdings, or if he really believes that. It seems unlikely to grow that much. Bitcoin itself could, in fact, wind up getting bypassed by more flexible, more scalable blockchains. But the underlying technology seems sound, according to many who have looked deeply into it, and there seems little doubt that there will be many more blockchain-based companies in the future, with or without Bitcoin in their business plans.

The biggest obstacle is usability. Bitcoin and blockchain have a long way to go before they’re easy enough to understand and use for the majority of bankers, let alone consumers. But with lots of people working on tying them into existing financial systems, that’s the direction that they seem to be headed. 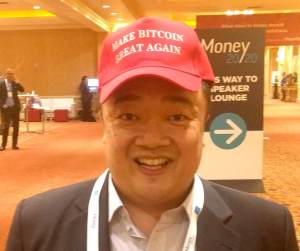