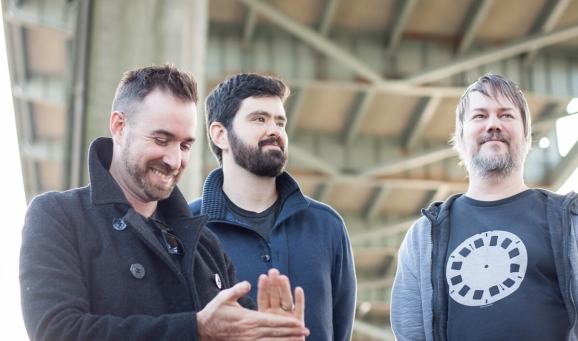 The founders include Ray Davis, Kenneth Scott, and Brian Murphy. Davis recently served as general manager for the Epic Games’ Unreal Engine 4. He was also a chief technology officer at Microsoft on the HoloLens project, and he was the lead programmer on Gears of War and Gears of War 2.

Scott spent 15 years as an art director in Triple-A games at places such as id Software and Microsoft Game Studios. He worked on titles such as Quake 3, Doom 3, Rage, and Halo; most recently, he worked in VR with a team of veteran developers at Oculus.

“After working on the Bullet Train demo, I am doubly excited to work on immersive VR games,” said Davis, in an interview with GamesBeat. “We see a real marriage of active play and VR.”

Murphy spent the last decade as a designer and creative director at Microsoft. Murphy helped take several major platforms and games from incubation all the way to ship, including Xbox One, Microsoft HoloLens, and the Xbox Kinect. Most recently, he helped create the virtual travel experience Holo Tour for HoloLens.

“We like to shoot things, and that is the territory we are likely to march into,” Scott said in an interview.

Drifter plans to make action games for VR headsets; in particular, it will focus on the headsets that support good motion controls such as the HTC Vive, the Oculus Touch and Oculus Rift, and the PlayStation VR. The company has about five working for it at the moment. And the founders are working on raising a seed round.

“We’re about to start dramatically growing our team,” Davis said.

Murphy said in an interview that he spent the last four years with the HoloLens team, and he also helped launch Kinect.

“I round out some of the creative energy on the team,” said Murphy. “I’ve spent my career building new platforms and launching games on them. I’ve had a focus on more of the casual and enterprise apps. I bring solid design on emerging platforms.”

Davis said one of the challenges for VR is to solve movement in shooter games.

“Teleportation works well, but nobody is excited about it,” Davis said. “We’d like to build a shooter that embraces teleportation and turns it into a first-class feature.”

Davis noted that using motion, such as physical movements that match actions such as loading a gun, or drawing a pistol, are exciting things that you can only do in VR.

Scott added, “VR is deeply personal. Designers need to accommodate it, especially when it comes to comfort. It doesn’t map one to one to anybody. This is one thing this team has been dealing with.”

And Murphy said, “When you design something, you have an ego that says it works for me. We realized it takes a lot of testing and experimentation. If you try to build a game for a million people, and one out of 10 get sick in a playtest, that means you’ll have 100,000 people who get sick from it. You have to take the comfort very seriously.”

As for the name, the founders said it evoked the image of Clint Eastwood in films such as High Plains Drifter. But instead of drifting through the Wild West, you would drift through one universe and another in VR.

“VR is still early days,” Davis said. “It’s hard to do one with such big scope. But we want to build a game that speaks to the power of VR.”