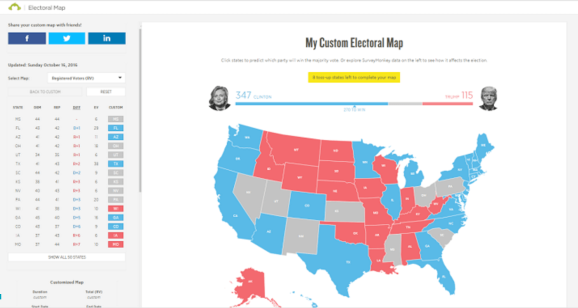 With just two weeks until Election Day in the U.S., all eyes are on who will be chosen as the next president. And while we are treated to periodic polls about how the candidates are doing, SurveyMonkey has launched a map that provides that data in real time, highlighting the key states where Hillary Clinton and Donald Trump are waging battles for votes.

Using an interactive map, anyone can try to figure out who will win on November 8. The map not only provides real-time polling results on a state-by-state basis, it also breaks results down based on demographics such as age, sex, race, income, education, gender, and even generation.

So if you’ve ever wanted to pretend to be Nate Silver at Five Thirty Eight or harbor secret ambitions of being a pollster, here’s your opportunity.

“We’re using our scale and technology to give a deep, unvarnished, and unmatched view of the electorate that is based on real opinions and real-time data,” said Jon Cohen, SurveyMonkey’s chief research officer.

This adds a new dimension to professional estimates, offering a powerful alternative to assumption-laden models based on relatively few interviews and cross-poll averages. Today, for the first time, we can allow voters to view large-scale, single-source data to create their own predictive analyses under almost any scenario they want to test.

No stranger to the political scene, SurveyMonkey has doubled down to show its service is no longer just about simple questionnaires, instead positioning itself as a hub for data collection, no matter the form. This election cycle, it has teamed up with The Washington Post in a joint process to poll Americans about who they want to be the next president. Prior to both parties’ national conventions, SurveyMonkey released a polling tool that offered insight into not only the presidential race, but also senate and gubernatorial races across the country.

Today’s offering differs from many other polling tools in that instead of just providing numbers, it creates a visual rendering of the Electoral College map. The data comes from more than 30,000 interviews SurveyMonkey has conducted since October 8. The company has analyzed the results and weighted them by state-level voter demographics for each state in the U.S.