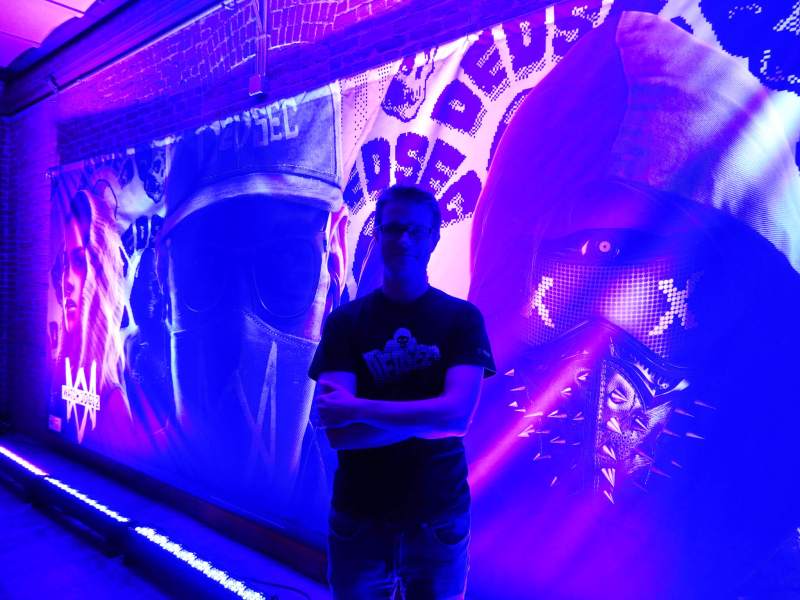 Above: Dominic Guay, senior producer on Watch Dogs 2, stands before an image of Marcus Holloway.

GamesBeat: And the same goes for corporations. They can do good or evil.

Guay: I work for a big corporation, so… [laughs] The best way to sum it up — I work for a big multinational corporation. We like tech. Video games are technology. For this game alone we have something like 60 programmers working on it. We try to be super transparent. We use data from players playing our game to make their experience better, right? We’re not being hypocrites about this.

We don’t judge technology as good or bad. Obviously in the context of Watch Dogs, to create that confrontation — we say there’s technology and there are people exploiting it for nefarious purposes. That doesn’t mean this technology can only be used for nefarious purposes. Some corporations in our game are acting badly, but others aren’t acting badly at all. We try to keep a balance. Otherwise we lose the believability of the world.

GamesBeat: The movies have sometimes used the trick of getting real-world newscasters and other window-dressing to convey a sense of realism. Were you guys tempted to do anything like that, to add more realistic contemporary details to the game?

Guay: Absolutely. We thought about a newscaster in particular. We do things like bring in real-world songs, real-world licenses. We did a deal with Amoeba Music in San Francisco, the famous record store. If you go to a lot of locations, you can see the real shops or other buildings there. You can see Ubisoft’s offices.

One of the challenges with something like a newscaster, though, we want to be very agile with our narrative. We want to be able to change things. We don’t want to bake it too early on because someone’s only available on Tuesday of whatever month. But it’s definitely something we looked at, and there are a few instances of details like that in the game. 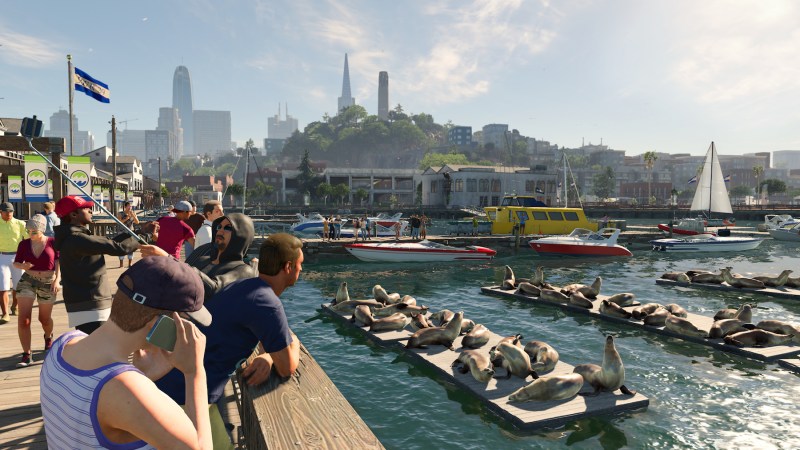 GamesBeat: The tone of the game is a little lighter. San Francisco just seems like a happier city than Chicago. [laughter] It’s more of a celebration of hacktivism than a story about revenge.

Guay: I think the dev team needed that, at a point. We spent four years making a game about Chicago in the fall, raining all the time. We wanted to make a game in the summertime, going out to California. San Francisco, I think you got it right. We wanted to celebrate the area and the diversity in it.

We also realized we were going to be talking about some serious subject matter, and we didn’t want to get too pretentious about it. We wanted to balance it with a tone that was lighter. Part of the key there was the main character. He’s younger. He has a sense of humor. He’s charming. Most important, because we wanted to have a whole group of hacktivists, he likes to work with people. Throughout the game, you’ll have conversations and relationships with the rest of DedSec. They like having some fun while they do what they do. That’s part of hacker culture, the court-jester feeling.

GamesBeat: Doing it for the laughs. Do many of the missions have that funny, pranking quality?

Guay: The way the story’s set, it advances from lulz to activism. Initially, they know what they want to achieve, but they’re not totally focused on how they’re going to achieve it. They start with some operations that are a bit unfocused, to say the least. But as they do these things and learn more about how to apply their hacking, they starting finding things that are more important to expose, that are more relevant to their cause, that call for more focus.

Even though the themes of the story are going to become more serious, they’re going to keep that jester spirit. But early on in the game especially, you’ll encounter some much lighter themes in the storytelling.

We like to say that Watch Dogs is happening before anything turns dystopian. It’s at a point in time where we still have choices to make. We always want to avoid going fully dystopian. The hacker in this case, the hero, he can still make a difference. He can make people’s lives better.

GamesBeat: The social media followers you get, that seems like an interesting way of measuring how successful your hacks are, how good a job the player’s doing.

Guay: So many people in the real world see their own personal progress now through their follower count. It becomes a kind of game in a lot of people’s lives. It seemed like a natural way of thinking about it.

In the context of the game, from a narrative perspective, it’s a bit more than just people who follow the social media presence for DedSec. It’s people who actively back the movement, who are willing to lend their hardware. You can use their PCs as part of your botnet. They’ll give you secrets and information they have. It’s all an abstraction of your ability to hack the city growing. But we had a bit of fun with it.