Question: You mentioned synergies. What is the role of ARM in the future SoftBank ecosystem, and how will that interact with other investments, like in Alibaba? Also, you mentioned future investments. Are you looking at further acquisitions in the semiconductor industry, or other companies in the supply chain?

Son: There are two approaches to investment. One approach is that you have one business, your main business, maybe your only business. Then you want to extend around your neighborhood to increase your synergies, find return on synergies. That’s one way of expanding through investment.

My approach is a little different. My approach is to look at where the industry is migrating, where technology is migrating. The best opportunity for return on investment is in the information revolution. Sometimes it’s far from where we are, but if you look back 10 years from now, you’ll understand.

It’s like in the game of Go. You have the black and white stones. Amateurs put their stones around where you’re playing, as close as possible. But that type of play won’t necessarily win a championship. To win a championship, sometimes you have to play very far apart from your main stones. 50 stones later, that will turn out to be the key to success.

I play a long-term game, a 20-year or 50-year game. Through many people’s eyes, it’s far away from the synergy we have in our own businesses right now. But the information revolution is coming. In many locations it’s exploding. My way of doing things—our return on investment has been 44 percent over the last 18 years. If I go just close by to where we are to bring synergies with what we do, the return on our investment won’t be 44 percent. It’ll be five or 10 percent, or sometimes even negative. That’s not the way I think I’d like to play. 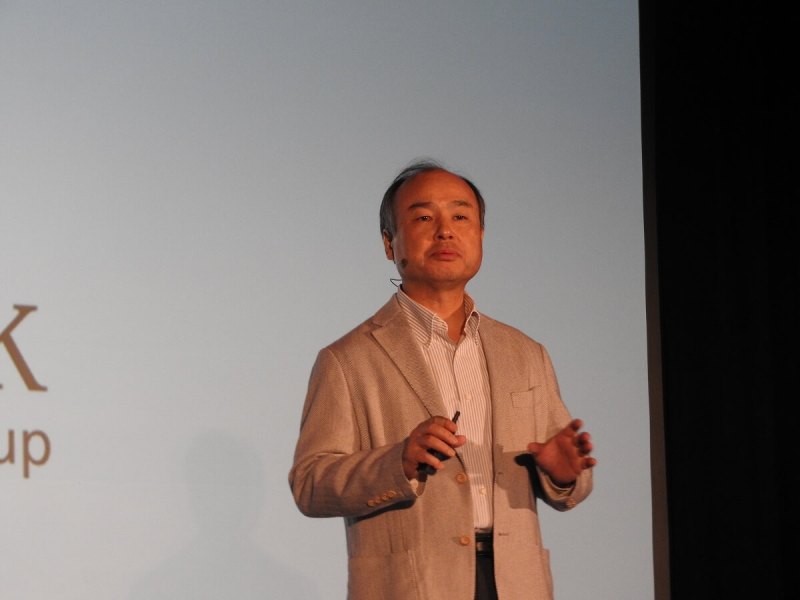 Question: It seemed today, from Sprint’s earnings, that things are going better there, but there’s some concern that it’s a zero-sum game, to an extent, the investment between ARM and Sprint. Can you comment on whether you think Sprint is now solid, where it’s going where it needs to go? And can you comment on where to invest in future technology? Obviously building network operators is very expensive, but you’re also talking about increasing investments in ARM.

Son: Between the Sprint investment and the ARM investment, I don’t understand why you would think it’s zero-sum. It’s not. Softbank is not adding new investment into Sprint.

My original intent for investing into Sprint—the main strategy was to buy Sprint and T-Mobile at the same time, so we’d have a critical mass to fight against AT&T and Verizon. The U.S. government didn’t accept that. They rejected it. So my fundamental strategy was broken. For a while I even wanted to sell the company and accept that I’d made a mistake. I had expected that the U.S. government would accept it. Anyway, I thought I was stuck in the Sprint situation for a while. I was very unhappy. But nobody wanted to buy, so I said, “We have to fix it by ourselves.”

Now the company is turning around. It’s already positive. For the first time in the last 13 years or something, the number of subscribers, the net adds—for so many years Sprint didn’t have net adds. They were losing customers every quarter. And then the EBITDA is almost double since we acquired. The company is really turning around. I’m very happy with its progress. I’m very proud of Marcelo and the team. They’ve done a fantastic job. I think it’ll be one of the biggest turnarounds in U.S. history.

I hear rumors that AT&T is buying another big media company. [laughs] I wonder if the U.S. government will accept that after rejecting my deal. There’s no justice in this country. Even before that, Verizon, the number one company, was approved to acquire the number five company. Number three and four are still smaller than number one. We got rejected. I was very upset. But anyway, Sprint is doing well.

ARM is a totally different story. As many people say, it’s not immediately related to Sprint, nor is it immediately related to mobile. But this is the paradigm shift that’s happening. If you look back on my business for the last 35 years, every time there was a big paradigm shift – PC into internet, internet into mobile internet – I sold everything that I could sell to get the cash to reinvest into the next paradigm. That’s how Softbank has survived and grown.

Every time I do that paradigm jump, our share price tanks. Everybody says SoftBank is going bankrupt, that there’s no synergy with the business we were doing in the past. That’s always been the case. Through four different paradigm shifts, every time I’ve jumped. But the companies that we were competing with in the past, in our old businesses, have faded away. They no longer exist, or they’re no longer growing. We survive and thrive in the next paradigm shift. This is what I believe ARM is going to provide.

Question: You’ve obviously embarked on a new, very large investment fund. How does that relate to this overall strategy? Could you bring another chipmaker into that investment portfolio?

Son: As I say, I think a big paradigm shift is coming. The biggest theme, in my view, is the singularity – that a computer superintelligence would surpass the human brain. That’s the biggest long-term thesis. I’ve had the image of it since I was 19 years old, when I first saw a semiconductor chip. Now I think it’s coming into reality, in the next 30 years. That’s the fundamental vision I have. For that vision, I’m exercising a strategy in this paradigm shift, assembling a group of companies.

$100 million is the beginning, in my view. The information revolution that’s coming, the singularity that’s coming in front of us, is such a big thing, such a great opportunity, that money is not enough, even $100 million. My passion, my presence, is bigger than many people think. I’m a little bit crazy, but I’m enjoying my life.

Question: Do you see that business going to, say, a dozen very big companies, or smaller venture investments?

Question: Do you have any companies in mind already?

Son: I already have a dozen or so possible investments in mind. I always do, but I don’t talk about them. In the last 10 years I’ve always had my wish list of about a dozen companies. Sometimes I change my mind. It’s like falling in love. [laughs] I shouldn’t be chasing too many women. But after taking a closer look, it may not seem as attractive as I originally thought. Things continue to change. If I start talking to a company and they tell me to go away, I have to go away. If we meet a few times and things seem better than I thought, I jump in.

Question: In this area now, there’s a lot of focus on artificial intelligence, autonomous vehicles, and biotechnology, the growth of technologies around the singularity. Are you interested in any of these particular fields?

Son: As I mentioned in the presentation this morning, the singularity is coming. There are several key areas that will have huge dynamic change and opportunities. Artificial intelligence, IOT, these are very exciting opportunities. That will enable many traditional businesses – health care, transportation, finance. All kinds of other traditional industries will be reinvented with the superintelligence that’s coming into our hands.

This is a huge opportunity. Shopping and media were early opportunities. Now every industry will be reinvented. Even old, stable industries will be reinvented. Steve Jobs reinvented telephony. That reinvention will be coming with the empowered technology of microprocessors. ARM is at the center of that revolution. The ARM core is going everywhere. It will enable all kinds of reinventions. That’s what I’m excited about.

If I were 20 years old, I would be almost going crazy over the huge opportunities everywhere. Every day I wake up with some idea about a new opportunity. I’d be pitching venture capitalists almost every week.