With Halloween right around the corner, Facebook is launching new features to get you in the spirit. Starting today, you’ll be able to respond to posts with themed Reactions, and if you do a Facebook Live broadcast, the social networking company gives you Snapchat-like lenses, specifically Halloween masks.

This is believed to be the first time the company has rolled out thematic tools for holidays, especially for Reactions. Launched in February, these are extensions of the traditional Like button. The like, love, laughing, wow, sad, and angry emoticons have been replaced with a skeletal thumbs up, candy heart, laughing witch, ghost, Frankenstein’s monster, or scowling jack o’lantern. 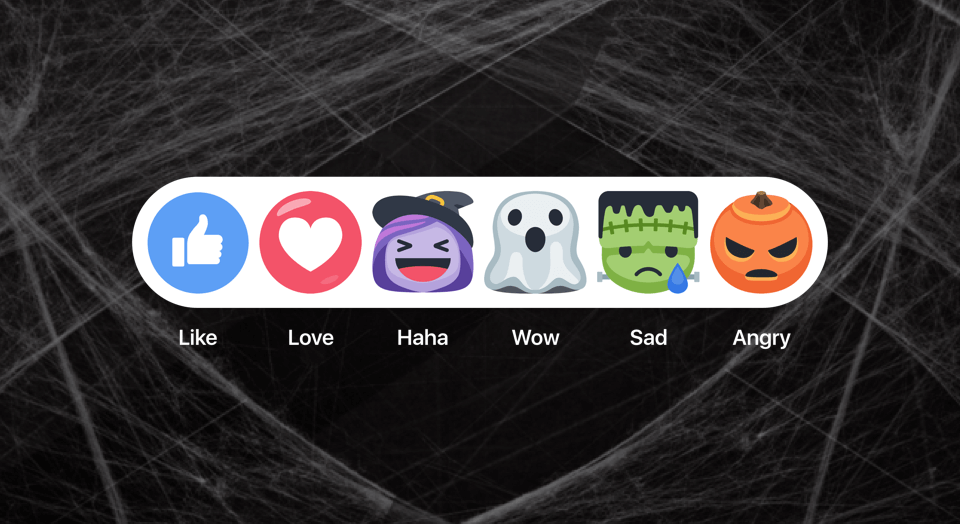 Available for a limited time only, the thematic Reactions will be available through Halloween. Adding them to your friend’s post is as simple as before — just press and hold the Like button on any mobile or web device and you’ll see the updated Reactions. Once this special promotion has ended, it’s likely that the Halloween Reactions will revert to their normal selves.

While this is the first time Reactions have been made around a holiday, it’s not the first customization of the responses. In honor of the 50th anniversary of Star Trek, Facebook rolled out updated Like buttons.

One of the traditions around Halloween is the ability to dress up, so if you’re hosting a live broadcast, showing up as yourself just isn’t going to cut it. That’s why Facebook has introduced special masks that are similar to what you’d get with a Snapchat lens. There are a number of these so-called masks, such as a skull, an evil queen, a jack o’lantern, and a witch. They will last through Halloween before being replaced by an unknown set afterwards. The idea is to enable broadcasters to be more creative.

In order to apply a mask, after you’ve begun broadcasting through Facebook Live, tap on the magic wand icon in the upper left corner of your screen. Select the masks icon in the creative tools tray, scroll through the options, and tap on a mask to have it automatically appear on your face. If you don’t like a mask, scroll left to the mask trap and select the “no mask” sign.

Facebook said that its Halloween masks will be rolling out over the next few days for those using Facebook Live on iOS not only in the U.S., but also the U.K. and New Zealand. There are plans to expand this offering in the coming months not only in more countries, but also to Facebook’s Android app. The company acknowledged that masks are available to public figures that use the Facebook Mentions app on iOS.

While the company wouldn’t comment on future plans, it’s quite possible that Facebook could roll this out for other large events such as sporting events, other holidays like Thanksgiving or Christmas, festivals, and more. The addition of so-called lenses within Facebook is certainly an interesting development, but it’s likely just the beginning of the social networking company’s agenda around camera usage and Facebook.