Gazillion, CBS Consumer Products, and Showtime have released the Dexter: Slice mobile game to spook everybody for Halloween. 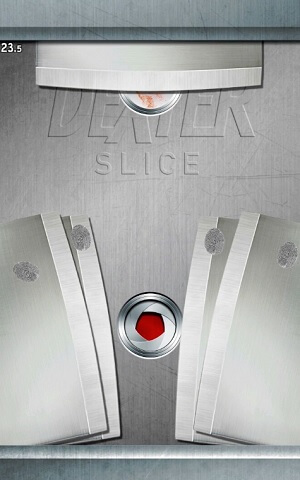 The $3.99 iOS and Android game is a celebration of 10 years of the Dexter television show, which told the story of serial killer Dexter Morgan. You test your adeptness at using a touchscreen to avoid getting sliced by multiple blades and knives. I played a little bit and it has very clever gameplay, like you’re solving puzzles with knives to avoid being cut.

At launch, the haunting voice of Dexter’s father, Harry, accompanies all action, complete with extensive original dialogue recorded by award-winning actor James Remar. Dexter himself, Michael C. Hall, will also lend his own voice talents in add-on content this December, available at no cost for those who purchase the game beforehand. It has 120 bloody-fun levels, which offer harder and harder puzzles.

It’s a challenge to launch such a game three years after the show ended. But Gazillion believes that fans of the show are still loyal and those looking for some Halloween horror will like it. To celebrate the launch, Gazillion will have Dexter: Slice fully playable this weekend at Stan Lee’s Los Angeles Comic Con. Also, it launches at a discounted price of $3 today through Halloween.

“I think Dexter’s fans will get excitement—they’ll get back into the head of Dexter,” said Remar in a statement. “It’s a very personal, first-person kind of experience where the people actually get to be Dexter, with the voice of Harry in the background. I get to have that little rapport with Dex that was so much fun for me to play when I was actually doing the show. It’s almost like I never left.”

The brainchild of Ecco the Dolphin creator Ed Annunziata, Dexter: Slice is the spiritual successor to his popular 2010 release, Slice HD. As with the previous game, Dexter: Slice presents players with an onscreen field of extremely sharp cutlery. Moving each knife reveals buttons that must be quickly pushed before the blades slice back into place. The mechanic is fun, but bad results may make you nauseous.

The challenge increases throughout the game—sometimes involving as many as all 10 fingers—eventually requiring a masterful combination of careful planning, limber fingers and quick reflexes. Fail, however, and anguished screams accompany the realistic blood splatters that now decorate the screen.

“Anyone familiar with Gazillion knows that we pride ourselves in making quality product related to phenomenal intellectual properties—Dexter: Slice is no different,” says Dave Dohrmann, CEO of Gazillion.