The top 25 public companies in the game business saw revenue increase 22 percent to $34.5 billion in the first half of 2016, according to market researcher Newzoo.

The data from the list offers a window into the dynamics of the top game companies. Newzoo said that this report shows global consolidation for the 69 public companies that Newzoo tracks. For all 69 companies, the revenue growth rate was 14 percent compared to a year ago.

Tencent, the No. 1 gaming company in the world, recorded revenues of $5.3 billion, up from $4.1 billion the year before. Its position at the top of the ranking will be solidified even further following the acquisition of Supercell, which is expected to be formalized soon. As previously predicted, Tencent and Supercell together should be able to end this year with around $13 billion in game revenues.

The fastest growing public companies by game revenues are all Asian, and they include Sony, NetEase, Mixi, and Konami. Mobile gaming now accounts for 40 percent of all revenues made by the top 10 companies, up from 34 percent in the first half of last year.

Sony’s revenue grew by $1.1 billion, or 45 percent from a year ago, mainly driven by the vast increase of revenues generated through the PlayStation Network.

Newzoo said that mobile gaming is driving a large part of the overall growth, now accounting for 40 percent of all revenues made by the top 10 companies, up from 34 percent in the first half of last year.

Mixi and Konami were the biggest growth companies in terms of rank position, each gaining four spots. While growth is slowing, Monster Strike still drove 19 percent year-on-year growth for Mixi.

Konami saw 31 percent growth year on year due to the success of its top mobile title and many console games. The strong performance of Japanese firms in the top 25 is also driven by the volatility of the yen. The yen’s exchange rate against the U.S. dollar increased 19 percent from a year ago. 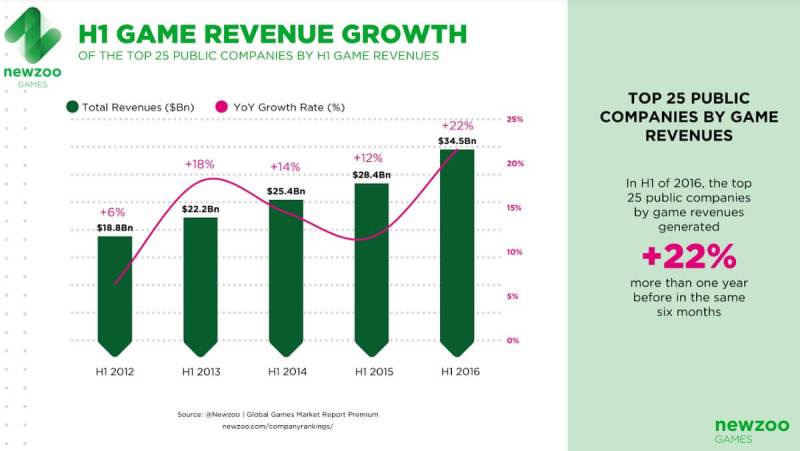 Above: The top 25 public game companies grew 22 percent in the first half.

As for Sony, Newzoo said that in 2.5 years, the paid service PlayStation Plus went from zero to more than 20 million subscribers. The revenue increase of the other two big growth companies in the top 10, Tencent and NetEase, was driven by the ongoing growth of the Chinese mobile games market.

NetEase reported an extremely successful first half of 2016 with revenues of $1.9 billion, 69 percent higher than the same period a year earlier. Its flagship title Fantasy Westward Journey continues to rank among the best grossing games in China on iOS and is performing well within the Android ecosystem. Early signs of success for its new game Onmyoji point to even bigger growth in the second half of this year.

“We expect NetEase to become a serious contender for a top five ranking in 2017, potentially overtaking EA on its path,” Newzoo said.

The highest newcomer in the top 25 was Ubisoft, recording the largest relative year-on-year growth, at rank No. 12. After a disappointing first half year of 2015, hit game The Division drove Ubisoft’s game revenues up by 193 percent. With Watch Dogs 2 and open-world action sports game Steep in the pipeline, it is very likely that the French publisher will perform just as well in the second half of 2016.

The second highest newcomer was Caesars Interactive Entertainment, making the ranking for the second quarter in a row. Its steady and continuous revenue growth, mainly due to the strong performance of Playtika’s social casino games, has led to 20th place for the company. Following Playtika’s acquisition by a Chinese consortium (which includes Alibaba’s founder Jack Ma and Giant Interactive) for $4.4 billion in July, Newzoo expects Caesars Interactive to drop out.

Three companies in the top 25 saw a revenue decrease of more than 10 percent in H1. Warner Bros. dropped four places, as the company released of two of its top titles last year but doesn’t have much this year. Facebook also lost four spots, with revenues 14 percent lower than one year ago. And GungHo’s revenues decreased 20 percent year on year, as it was not able to replace the loss in revenues of its hit game Puzzle & Dragons.