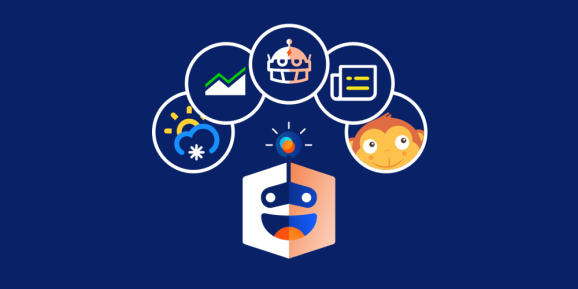 Yahoo has made an app for people to chat with its bots called Yahoo Bots, a Yahoo spokesperson told VentureBeat Wednesday.

The app utilizes buttons, cards, and carousels similar to the kind made available on several chat platforms this year, including Facebook Messenger. 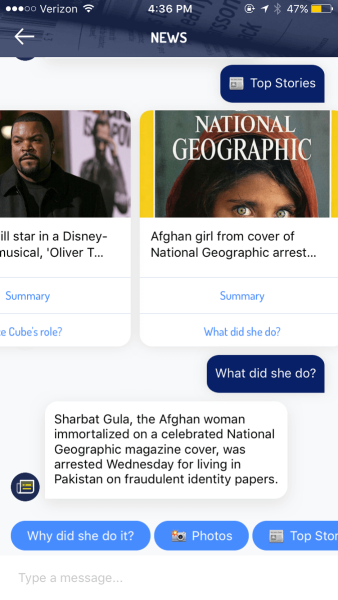 Above: Screenshot of Yahoo News bot in the Yahoo Bots iOS app. See cards and carousel at top of photo and buttons below.

A Siri integration is also available so Yahoo Bots users can send messages to bots within Yahoo Bots with their voice.

How Yahoo changes and evolves its bots app could be pretty interesting.

Yahoo could choose to add more bots made by its Bots team, create mashups from properties like Flickr and Tumblr, or even create a search engine and artificial intelligence combo like Google Assistant or Xiaoice from Microsoft. The company could also choose to open its app to third parties and developers so they can create their own bots for Yahoo Bots.

Yahoo plans to “explore all avenues” related to a potential third-party integration, a Yahoo spokesperson told VentureBeat in an email.

The other thing Yahoo can do with Yahoo Bots: Let people talk to people. Today you can only speak to bots.

Contrary to the approach taken by many other chat app platforms like Facebook Messenger or Slack, Yahoo is dividing its bots from its Yahoo Messenger app.

“We’ve started by launching where the bot platform has already been built and bot capabilities are supported. We’ll continue exploring other opportunities, including launching on Yahoo Messenger, as we learn and iterate,” a Yahoo spokesperson said.

About the idea of allowing people to chat with each other or together with bots with the Yahoo Bots app, the spokesperson said, “Anything is possible.”

The company was vague when asked if users can expect additional bots to come to the Yahoo Bots app in the future.

“We continue to explore opportunities to bring better bot experiences to our users with a focus on areas where we bring domain expertise (News, Finance, Sports, Lifestyle),” the spokesperson said.

The Yahoo Bots app is available for download on iOS and Android devices.