GamesBeat: Things like the super-fast speed – where they represent it as time slowing down – how does that come about?

Rosellini: That came from sports. If you’re in what they call the zone, as an athlete—the phenomenon that the athletes say is happening is time slowing down. You get this kind of extrasensory feeling of being able to take in a lot more information, process it faster, and then be able to manipulate in the physical environment. Someone like Michael Jordan describes this phenomenon that we try to capture as part of this particular power the character has.

So how is this created in the brain? Well, the brain is only using electrical activity. Conceivably, from a neuroscience perspective, this could simply be the local field potential of oscillations and currents in certain portions of the prefrontal cortex and motor cortex, oscillating in a way that presents time as if it seems slower. We thought, well, if you could capture what that signature was in the brain, which is possible, and manipulate that oscillation in the brain, then you’d have the effect of being able to process much faster.

So time isn’t changing. Your perception of time is changing. There is some proof that that happens already, organically, and you could manipulate that using devices that currently exist. 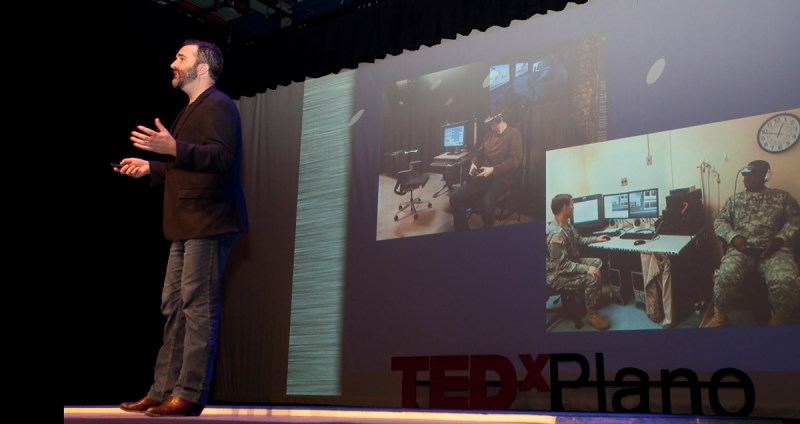 Above: Will Rosellini gave a TED talk on going beyond human.

GamesBeat: Did you work with the whole team? How many scientific consultants did they have?

Rosellini: I kind of served that role for them. It was just me, and then I think they also have really clever marketing. Back in the day, one of the newspapers actually thought that the Sarif Industries company was real. David Sarif’s company, the marketing material was so good that they claimed the eyeball—what did they call it? Some newspaper – you can probably google it – you’ll see that they ran a piece that pulled out something from the Deus Ex books. They pulled out language we used in the game. That was back in 2013. It was kind of fun.

As far as Open Bionics, they did a really good job marketing—they’re making a product, right? They guerrilla marketed their product by way of the Deus Ex story. I didn’t have much to do with that as far as coming up with that idea, but Open Bionics did a great job helping out their own company.

GamesBeat: So you didn’t interact with those guys much?

Rosellini: Not during—they weren’t part of any of the writing process. They came in post-production as we got into thinking about some of the marketing efforts. They weren’t part of the original making of the game. But their idea, that you could 3D-print and customize prosthetic limbs, is very much in line with what we thought would happen. We were excited to see another company out there trying to do that.

That’s very much what the LIMB clinic represents in the game, that you can get these—it’s just software, once 3D printers become more prevalent. That’s what they’ve proven. 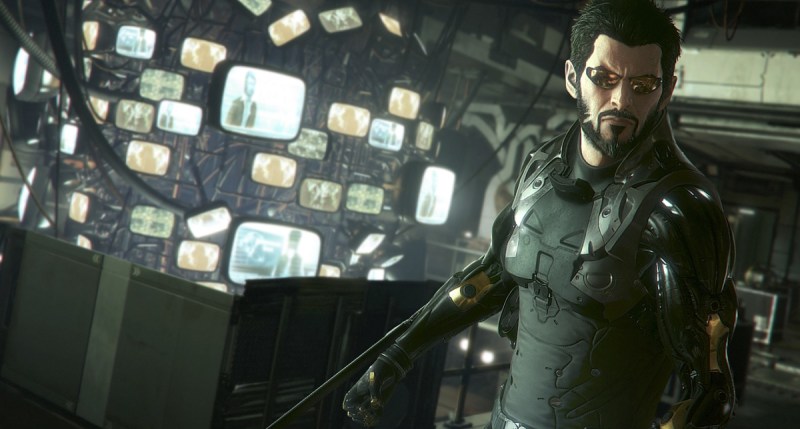 Above: Adam Jensen is the hero of Deus EX: Mankind Divided.

GamesBeat: Did they put any Easter eggs about the real world in there? Were there references to anything like Open Bionics?

Rosellini: No. The only thing they did is they gave me an office in Human Revolution. There’s an office labeled “Will Rosellini” you can walk into, which is nice. But they didn’t do anything too overt, calling out anything in the game.

Just for fun, I named some of my companies after—there is a Sarif Biomedical that’s one of my real companies. It was bought by a public company, so you can find that Sarif Biomedical existed and was acquired. I named another one Tai Yong, and another Belltower Associates. That’s been kind of fun.

GamesBeat: The invisibility, do you think that’s also feasible?

That also then allows you to use the cloak on—you can change it into lenses, make super-thin lenses that allow you to perform the same action with light. They’ve done it with electromagnetic waves, by creating layers of fabric on top of whatever you’re trying to cloak, which makes the device invisible from an electromagnetic perspective. In 2013 or 2014, some people up at Rochester and at UC Berkeley, one of them made something under a microscope invisible, and another one used macro-scale materials and lenses to essentially make an item invisible to the human eye.

It’s a matter of manipulating how the eye is able to receive what’s coming off of the cloak. Knowing the way the human eye works, you’re able to scatter the light. Can you make that into something that actually makes someone invisible? Not really. You’re just tricking the human eye. But that was close enough for us to say, “Well, why not?”

GamesBeat: Were you involved in the CNN event, where they had the augmentation documentary?

Rosellini: Yeah. I was in the documentary. I flew out and they looked at our labs. They spent a lot of time with me. They did a great job, I thought, of getting at the heart of who’s doing this stuff.

The other thing we did, we created a code of ethics for human augmentation. We worked really hard on that. We probably spent four months. At the end of it we had some really notable people that had worked on it. Someone in the Obama administration was in on it, coming up with these ethical codes. We published a code that CNN put out at the end of the conference.

GamesBeat: Is there more happening on that front, as far as just documenting all of this?

Rosellini: The game came out in August. Zoltan ran for president afterward, or during. He was one of the guys on the ethics code writeup. He ended up declaring a presidential candidacy and went off and said this stuff was so important that he felt politics is what we should be focused on. Right now—game productions get really big, and then they get really small after a release. There’s a lot of hiring and retooling to get on new franchises and new games. But like with Human Revolution, they come out with different platforms, or extensions of the game that might have interesting things. I’ve also heard that there’s a movie in the works for the Deus Ex franchise, but that’s all I’ve heard.

GamesBeat: They left a fairly big cliffhanger in some ways. You have no idea who these shadow people are, still.

Rosellini: If you haven’t played all four of them, I kind of agreed with a lot of the comments about how this one ended. But if you’ve played Invisible War and the original game, some of this stuff has been repeated enough that they might have just felt like they didn’t need to fill in the blanks on everything. They kind of did the Tolkien thing, where if you don’t feel like enough of the story was in the movie, you can go and read the books.

I didn’t like the approach, because I feel like they have a complex enough story that you shouldn’t make people do all of the thinking. But nonetheless, you’re right. You have to go back and play the old games to see how it’s all laid out. It’s pretty rough to go back and play the original now. It’s almost 20 years old. There are books that have been written to fill in gaps, but nothing that goes back – or in the future, I guess – to explain some of the details.

Human Revolution spent a lot of time placing it in the technology space. Mankind Divided really focused on the political strife. But there was less of an explanation as far as who the people are that are behind the strife.

GamesBeat: And once you get to the end, you really want to take those people out. [laughter] It seems to me like there has to be a third game where that happens.