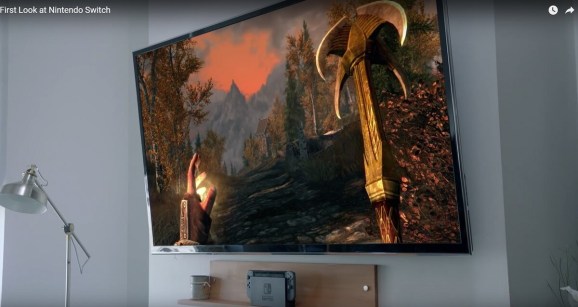 Skyrim running on the Switch while it is docked.

Nintendo is not holding back on the Switch due to supply constraints. Instead, the company doesn’t want systems sitting unsold in warehouses and on shelves.

Tatsumi Kimishima, Nintendo president and chief executive, said during a conference with investors that the company could roll out more than the planned 2 million Switch systems before the fiscal year ends March 31 if market demand is strong. The CEO previously said that the 2 million systems would hit before March, but it didn’t explain if that number was due to component shortages or conservative accounting. Nintendo provided fiscal guidance based on those numbers, and it likely wants a hurdle it can clear easily so that a potentially cool Switch launch doesn’t spook investors.

Nintendo is struggling to turn a profit, and keeping slack out of the supply chain is one key to generating net income from the Switch for the publisher. One way to keep those margins high is for Nintendo to avoid spending money on storage space in warehouses because retailers don’t want 5 million Switch units on launch day. Nintendo can also ensure stores are making frequent repeat orders if they are instantly selling out of their stock. So keeping a taut chain from manufacturing through to the customer will ensure that Nintendo minimizes losses.

At the same time, that could lead to shortages like the company experienced with the Wii. That system was difficult to find at launch and for almost the two years following that. So if consumers go nuts and jack up the preorder numbers, Nintendo has the capacity to turn up production to meet demand to a point. That confirms that the company isn’t necessarily worried about running out of displays or Tegra processors. It just wants to plan for a scenario where the Switch sells at about the rate that the Wii U did when it launched in 2012, which was about 3 million after six weeks.

Consumer excitement for the Switch already seems much deeper and broader than it was for the Wii U. At least that’s the impression many are taking away from the response on social media, and the 18.7 million views the trailer has racked up on YouTube. That’s already far more than the approximately 15 million views the Wii U trailer has more than four years later. Gamers are likely still waiting on price, launch games, and a few other answers before committing to making a purchase, but Nintendo seems like it could easily sell more than 2 million systems in March at this point in time.