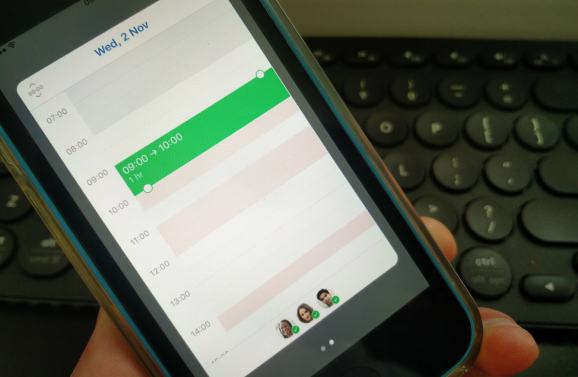 Microsoft is bringing a new scheduling feature to its Outlook mobile app today, one that makes it easier to organize meetings with colleagues.

Borrowing from the scheduling assistant on the desktop version of Outlook, the new mobile-focused feature basically lets users view their colleagues’ availability in real time. This ensures a mutually suitable date and time can be reached without having to engage in multiple back-and-forth emails.

So, let’s say you want to organize a meeting with three other people. You would create a new event, as usual, and add the names of the individuals you wish to attend the event. Then you hit the date-picker, and dates that have some availability for everyone (assuming everyone has up-to-date calendars) will be shown in white, while yellow means that some people are free, and red means that nobody is available. When you hit the time-picker, you can drag and drop the event onto a slot until it turns green, which means everyone is available at that time.

The new feature is only available on iOS for now, and it is only open to accounts that are connected to Office 365 or the latest version of Exchange. Microsoft says that it will be arriving for Android and Windows 10 mobile “shortly.”

Today’s news comes six months after Microsoft announced it was shuttering Sunrise, the smart calendar app it acquired last year, noting that it would be bringing “the magic of Sunrise” to its mobile Outlook apps. Indeed, the company recently rolled out a refreshed Outlook app on Android and iOS, giving the apps a handful of new features, including Maps and Skype for Business integration, as well as the ability to subscribe to so-called “interesting calendars,” such as your hometown sports team’s fixture list.

Microsoft also recently launched summary cards for Outlook across all platforms. These promise Google-like informational snippets relating to emails you receive, such as flight information and packages that have been dispatched to your address.