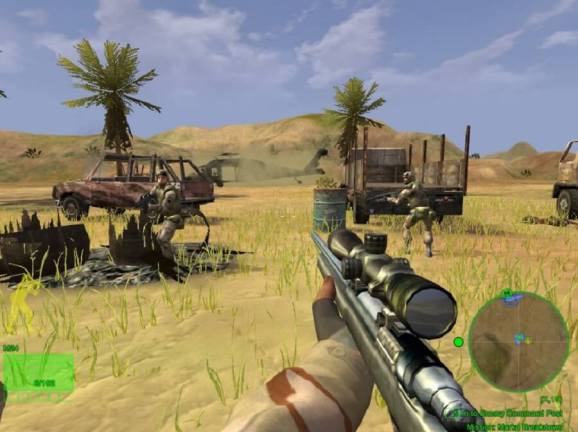 Delta Force by NovaLogic was once one of the hottest first-person military shooters.

THQ Nordic has acquired the rights to all games made by defunct publisher Novalogic. That includes the rights to titles, such as Delta Force, Comanche, Joint Operations, and more.

The deal is the latest in a series of game intellectual property acquisitions for Vienna, Austria-based THQ Nordic. Once known as Nordic Games, THQ Nordic acquired the rights to THQ’s assets in 2013, after the legendary Los Angeles publisher of games, including Darksiders and Red Faction, was liquidated in a bankruptcy sale. Since that time, THQ Nordic has been working out what to do with those properties.

John Garcia, who served as NovaLogic’s CEO, founded the company in 1985. The studio specialized in military simulation games, and many of its titles have become classics. One of its best releases was Delta Force, which debuted in 1998 as a first-person shooter.

Delta Force made use of voxels, an efficient way to create 3D graphics, and that enabled high-speed action in online matches with dozens of players. I used to play Delta Force and Delta Force 2 religiously in the days before Call of Duty was even on the map.

“After 30 years of creating groundbreaking computer and video games, we are proud to pass the baton to THQ Nordic,” said Garcia, the owner, founder, and CEO of NovaLogic, in a statement. “As individuals, they are enthusiastic gamers and as a company have shown the agility and acumen needed to propel our industry towards a much-needed reset. We are happy to see the franchises we created in such capable hands.”

Novalogic’s games struck a strong chord with hardcore players. Among the other titles that it made were Armored Fist, Tachyon: The Fringe, F-22, and F-16.

“NovaLogic pioneered military simulations and military-themed multiplayer shooters with vehicular combat and also clearly targeted at an adult audience,” said Reinhard Pollice, business and product development director at THQ Nordic, in a statement. “We are extremely satisfied with the new additions to our portfolio and also very thrilled about how to continue some of said franchises. We are open for talks in this regard if any developer approaches us with a concept for a potential sequel to any IP.”

THQ Nordic’s other brands include Darksiders, MX vs. ATV, Red Faction, Titan Quest, and numerous others. The company’s internal development studios are Grimlore Games based in Munich, Germany and Rainbow Studios based in Phoenix, Arizona.