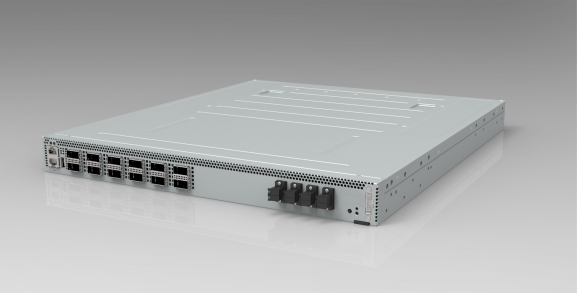 At its inaugural Telecom Infra Project (TIP) Summit event at company headquarters today, Facebook is announcing the development of Voyager, a new piece of data center networking hardware known as a transponder, which takes packets from switches and routers and gets them ready to be sent out over fiber optic cables. Facebook intends to share the design for the device under the recently established TIP program.

Other companies, including Cisco, sell transponders. But Facebook wanted to build a “white-box” system, just as it’s done for servers, storage, and other networking gear in recent years. This is another way for Facebook to control its destiny, not only economically but also functionally. (Separately, LinkedIn is also developing its own data center infrastructure, as Business Insider recently reported.)

The 1 rack-unit (RU) hardware comes with 12 QSFP28 ports and four 200Gbps DWDM line ports. In certain ways Voyager draws on parts of Facebook’s Wedge 100Gbps switch. It’s capable of working with packets in metro environments — think multiple data centers located around a single city — or even preparing them to be sent from one datacenter to another one that’s much, much farther away.

While Facebook used its own existing technology for Voyager, it also incorporates products from third parties. For example, it contains an AC400 digital signal processor (DSP) application-specific integrated circuit (ASIC) and optics module from Acacia Communications, which recently went public, and it draws on software from networking startup SnapRoute.

Equinix and MTN have already experimented with Voyager, and Facebook intends to open-source the underlying software in time.