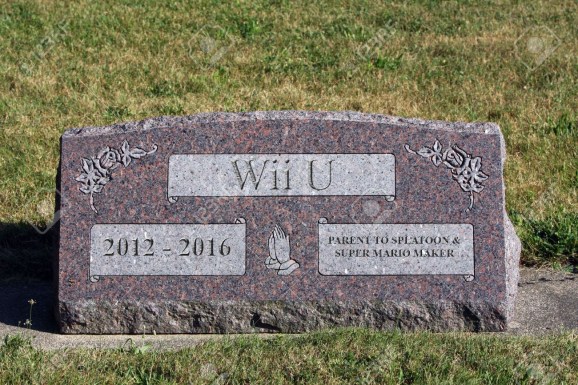 This is potentially the end for Wii U.

2016 is potentially the end of the road for the Wii U.

Nintendo is going to end production of its latest home console, according to separate reports from Japanese newspaper Nikkei and gaming news site Eurogamer. This will essentially put the struggling system out of its misery as the gaming company shifts from Wii U and the aging 3DS handheld to mobile games (like Miitomo) and its upcoming Nintendo Switch console/handheld hybrid. The Nikkei report said in March (as translated by gaming analyst Serkan Toto of Kantan Games) that Nintendo has already stopped making certain Wii U accessories. The Wii U has fallen far behind its Microsoft and Sony competition despite having a one-year headstart on the Xbox One and PlayStation 4. In a gaming industry worth $99.6 billion, Nintendo doesn’t want to give up any more ground while putting money into a sinking platform.

GamesBeat has reached out to Nintendo for comment, and the company has not yet responded. In March, a Nintendo spokesperson told IT Media that rumors of Wii U production ending were “not an announcement from the company.” But now Eurogamer is claiming that the final Wii U will roll off the assembly line this week after shipping 13.36 million systems worldwide.

1) The Nikkei just reports Nintendo will stop producing Wii U within 2016. It doesn't say they will necessarily start selling NX in 2016.

Bringing the Wii U to an end fits with Nintendo reorienting its priorities around the Switch. The company finally announced that system, which connects to a TV but also has a dedicated display for on-the-go gaming, October 20 with a trailer. That video showed us some of the unique capabilities of the device, and how it fulfills some of the promise of the Wii U. Nintendo reconfirmed that it is launching the Switch worldwide in March, which is only five months away. A bigger Switch event is coming in January.

As for the Wii U, 2016 is only its fourth year on the market. Microsoft’s original Xbox and Sega’s Dreamcast are the only other major console release to have such stunted runs. Like with those systems, Nintendo never established the Wii U as a viable platform for the mass market. The company set it apart with its odd tablet-like controller, but that and everything else about it were a step behind products from Apple, Microsoft, and Sony.

Quickly after the Wii U debuted, third-party publishers like Electronic Arts reportedly sent back their Wii U development kits. This led to a machine that is almost exclusively worth owning to play Nintendo first-party games.

The Wii U does have some standout hits. Super Mario 3D World is one of the best platforming games ever. Splatoon is an exciting, hip new shooter that shows Nintendo now understands online multiplayer. Mario Kart 8 is probably the best entry in that series. Bayonetta 2 is one of the finest action games ever made. And Super Mario Maker is an incredible experience that won GamesBeat’s Game of the Year awards in 2015.

Looking ahead, the Wii U has only one more noteworthy release yet to come: The Legend of Zelda: Breath of the Wild. Nintendo has delayed that action-adventure hit a few times, but it finally revealed it at the Electronic Entertainment Expo trade show in June. But that game is also coming to the Switch, and many people may choose to play it on that new hardware.

Regardless, the Wii U’s legacy is a murky one. It is clearly one of Nintendo’s greatest failures, but it also has some truly wonderful games. And while its exit is imminent, I don’t regret buying mine.

Updated on November 11 at 10:30 a.m. Pacific time with Eurogamer report.

Updated on March 23 at 11 a.m. Pacific time with Nintendo statement to IT Media.