The survey looked at 10,000 consumers across 10 global markets to examine how people consume digital media. It found that women prefer casual genres like puzzle, arcade, and consumer games more than men.

The survey also looked at e-books. It found that 60 percent of consumers who read them have access to other functions on the same devices. Only 27 percent of non-millennials are interested in romance, but it is the top genre for U.S. millennials at 43 percent. About 21 percent of U.S. digital media consumers prefer using Amazon Payments to purchase non-gaming content while PayPal is the e-wallet of choice for gamers.

In digital gaming, 67 percent listed action as their preferred genre, compared to 62 percent for action-adventure and 53 percent for adventure. Roughly 58 percent said they had downloaded a puzzle game in the past three months. 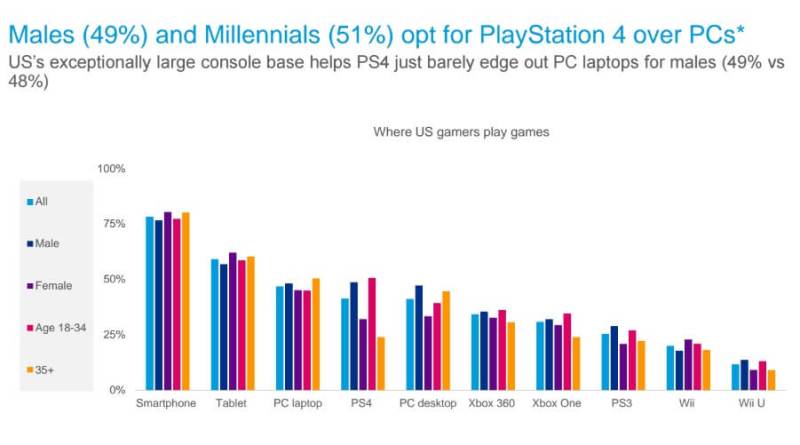 Above: PlayStation 4 beats out the PC laptop in terms of U.S. gamers.

The survey found that games were not impulse purchases. Only 27 percent of console gamers said they purchased a game immediately upon hearing about it while the number was 26 percent for mobile gamers and 20 percent for PC gamers.

And 31 percent of those surveyed said they played most of the games for the gaming video they watched, with 23 percent stating that they played all of the games. While YouTube (80 percent) was listed as the top platform where gaming videos are watched, vertical-specific platforms also drew the attention of gamers. The others include Twitch (27 percent), PlayStation SharePlay (19 percent), Ustream (19 percent), and GamingLive (16 percent).