We’re now exactly a week away from Election Day, as Hillary Clinton and Donald Trump prepare to conclude one of the most heated and controversial U.S. presidential campaigns in recent history.

While the numbers vary from poll to poll, broadly speaking, Hillary Clinton remains ahead of Trump and by most assertions should emerge victorious come November 8, though some reports suggest that momentum favors Trump.

You may also remember that perennially popular dating app Tinder last week launched its Swipe the Vote campaign in the U.S. and 15 other countries. This initiative is designed to match users to their most appropriate presidential candidate based on their opinions on a range of political and economic issues, including gun control, immigration, taxes, and education. Well, the results from the massive global swiping poll are now in.

The results that matter most are those from the U.S., given that this is where voting is actually taking place. Tinder’s data shows that 57 percent of its American users matched with Hillary Clinton based on their issue-specific opinions, but only 53 percent indicated they would actually vote for Clinton over Trump. 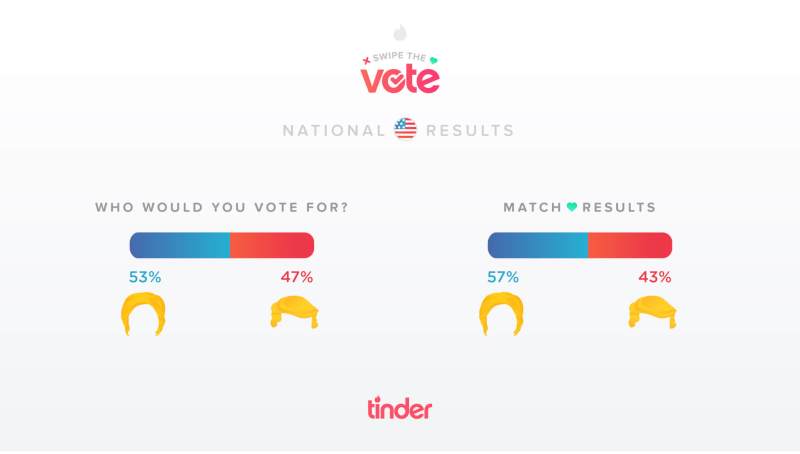 Taking a global perspective, a whopping 80 percent of Tinder users — in Argentina, Australia, Brazil, Canada, Chile, Colombia, France, Germany, India, Japan, Korea, Mexico, Russia, Spain, and the U.K. — matched with Clinton based on their opinions on key issues, and 73 percent indicated they would actually side with Clinton if they were able to vote.

Curiously (or not), of all the countries polled, only Russia indicated it would vote for Trump, with 71 percent of users siding with the 70-year-old businessman, though 76 percent of users actually matched with Clinton in terms of their opinions on issues.

Tinder hasn’t revealed how many people actually participated in the poll, but with millions of users around the world, it’s safe to say that many thousands (at least) contributed to the data, meaning that the percentages reported here hold some meaning. That said, it’s also worth remembering that Tinder data isn’t representative of the entire U.S. electorate, as it will be hugely skewed toward a very specific demographic — young and (mostly) single.