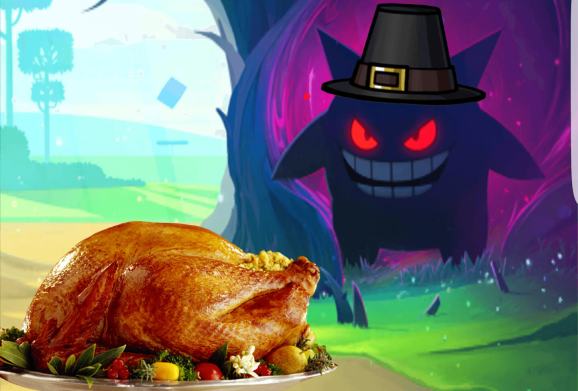 Now that's an event I want to see!

All the ghosts should’ve returned to their graves by now because it’s time to go turkey shopping (at least in the States), but spooky creatures still haunt Pokémon Go.

Developer Niantic threw its first seasonal event for its map-based, augmented reality monster-catching game for Halloween last week, and the festivities were only supposed to run from October 26 through November 1. But a day past that deadline, you are still likely to encounter a ton of Haunters and Cubones when you go out walking. For the event, Niantic increased the spawn rate of its ghost and other frightening critters. The studio also amped up the drop rate for candy, which has helped players evolve their Pokémon faster. All of that was a remix of existing content in the game, but it was enough to significantly increase player spending for Pokémon Go in the $36.6 billion mobile-gaming market.

I’ve asked Niantic why the event is still live, and the company confirmed that it is letting it continue for a few more hours today. But it is still planning to end it soon.

Of course, fans are going wild with speculation. A thread on Reddit details a theory that this is delay is a precursor to a major update, and Niantic allegedly doesn’t want to pull the event until it can roll its momentum into the new features. Other people think the company is simply making too much money, and it doesn’t want to ruin that. The more skeptical fans, however, think the developer is just encountering technical difficulties that are preventing it from ending the event.

Niantic instead claims it just wants to give you a few more hours to enjoy the benefits of the event. And I’m happy to continue grinding out some more Magikarp candies. It’s the sweet treat that won’t rot your teeth!