ToneTree is launching a Kickstarter crowdfunding campaign for its Oak augmented reality playground system. The Oak is a dock for your iPhone that turns any tabletop into an AR playspace.

The product brings together digital and physical toys to create an AR experience. Augmented reality is expected to become a $90 billion market by 2020, according to tech advisor Digi-Capital.

To get started, just place your iPhone on the Oak Dock, launch the Oak App, pick up an Oak Kit, and play. Oak comes with a variety of kits that let you immerse yourself in AR experiences, whether you want to play drums, fly through space, or create your own app.

The Rockstar Kit lets you play any instrument anywhere. Just place the included pads down in front of Oak and break out into a jam session. The Gamer Kit turns your table into a battlefield. Collect powerful AR trading cards, place them in front of the Oak, and watch them come to life as you battle your friends. The Explorer Kit lets you pilot your own spaceship. Use a toy ship to dodge asteroids and battle enemies as you explore deep space. With your ship in your hand, you’re in full control. And the Developer Kit lets you create your own augmented reality apps. 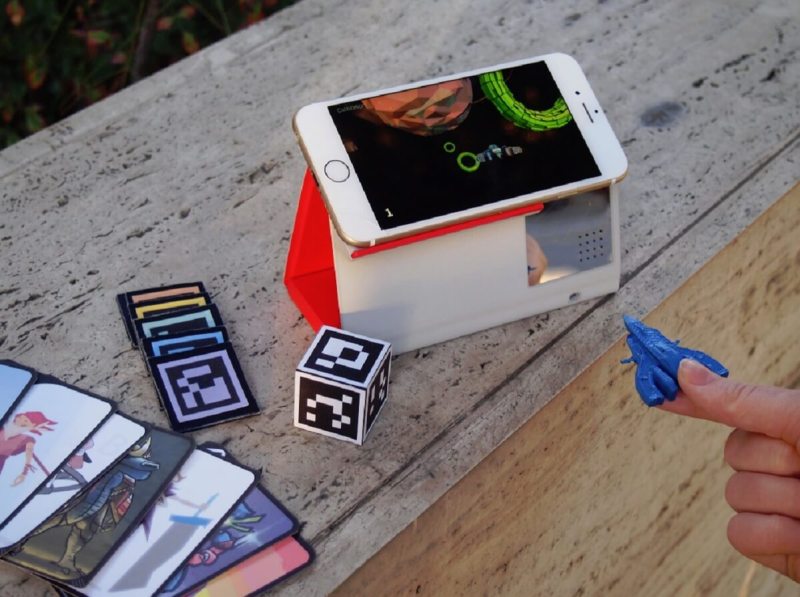 Above: The Oak Explorer Kit.

Much like the Osmo apps on the iPad, Oak uses patented computer vision technology to see and understand the space in front of your iPhone. The items included in the kits are called “totems.” Totems are simple pads, cards, and plastic toys that Oak uses to control the virtual world. Oak also includes a laser in its base that detects when the user is interacting with totems.

Oak came to life through an art project. The original idea was to turn the walls and floors of a building into an augmented reality musical instrument.

“At the project’s premier, a little girl’s wonder with the musical instrument inspired us to push the idea further,” the company said.