From the mind of iPod and Nest co-creator Tony Fadell comes a smart electric vehicle for kids. Actev Motors is announcing today that it is shipping the Arrow Smart Kart, an app-controlled kart that can go a speedy 12 miles per hour.

Fadell came up with the idea after he went go-kart racing with his son. He wasn’t impressed with the vehicle they were using, so he asked his friend Dave Bell if he could come up with a design for a modular electric kart. Bell assembled a team in 2014 and started taking preorders in February. The company is now shipping to its preorder customers and is taking new preorders for 2017 shipments.

The base vehicle costs $995, and it costs another $150 for the decorative body kit. It’s an interesting application of smart technology to an old-fashioned racing category on the part of Fadell, who sold Nest to Google for $3.2 billion in 2014. Bell worked with Fadell on the design of the original Nest.

“Sadly, I didn’t invest in Nest,” said Bell. “My worst financial decision ever. Tony called me up in February 2014, after the Google purchase of Nest had closed. He said he loved going go-karting with his son, but the go-karts were lousy. He said he wanted to make a modular electric go-kart for kids. We liked going to the race track together, and he knew that would resonate with me. It sounded fun, but I wanted to convince myself there was a decent market for it.”

Mountain View, Calif.-based Actev Motors hopes it has found a gap in the market. Bell said that Fisher Price’s electric toy vehicles are good for kids under five. And many of the other racing vehicles on the market are for kids who are around 10 years or older.

“After five years old, kids get pretty bored with it,” Bell said. “It has a lead-acid battery, a motor, and a switch. That’s it. There’s nothing smart about it.” 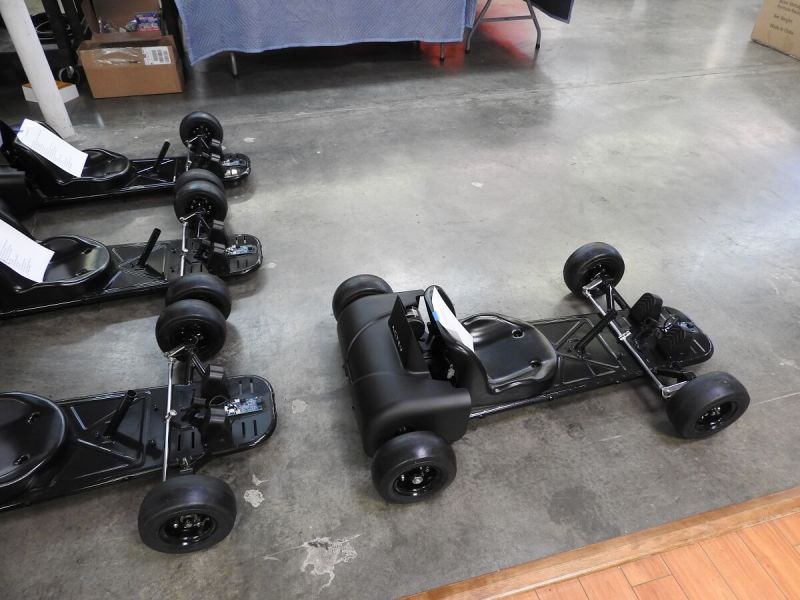 So Actev worked on it for a couple of years and designed the Arrow Smart-Kart for children ages five to nine. The Fisher Price vehicles go no more than five miles per hour, so a parent can walk alongside the child and monitor them.

“The reason there are no products in the gap is that no responsible parent would take a bored five-year-old and put them in a kart that goes 12 miles per hour,” Bell said. “We solved this problem by allowing the parent to remotely supervise via a mobile app.”

At 12 miles per hour, the Arrow Smart Kart is faster than a parent. But the app can put the parent’s mind at ease. With the app, the parent can press an emergency stop button if necessary. The parent can also regulate the maximum speed limit. The kart connects to the smartphone via a Wi-Fi hotspot that is built into the kart. The parent can also set geo-fencing boundaries (the kart has GPS navigation) for where the kart can roam, creating a track for the child.

Under the traffic safety rules, the karts are not authorized to drive on the street. Bell said that, just like other kids’ riding vehicles, the Arrow is intended for operation in areas without fast-moving vehicles (such as a cul-de-sac) and under constant parental supervision.  Another ideal location is a school or church parking lot during low-traffic periods, he said.

As for the risk of flipping, Bell said, “The Arrow is specifically designed for flat paved surfaces. Because of the modest speeds (12 mph maximum), a rollover accident is virtually impossible in the recommended environment.”

Since the Wi-Fi is built into the vehicle, the kart can always be in range of the smartphone, even if a race happens in a place without phone service. As you can see from the video below, a thin adult can fit into the car. I tried it out, and it actually goes at a very fast pace. Twelve miles per hour may not seem like much, but it’s a good speed for a kart. I had a lot of fun with it, but I barely fit into it. 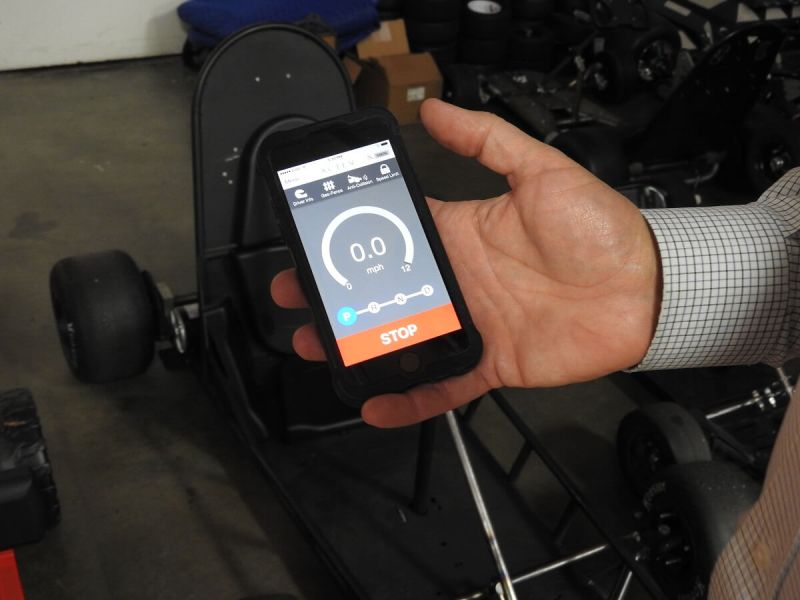 Above: App for the Arrow Smart Kart. Parents can control the speed and stop the kart.

The Arrow Smart Kart has built-in ultrasonic sensors that give it collision avoidance, automatically stopping the Arrow if an obstacle is detected. An inactivity timer alerts the parent if the Arrow is motionless for a selectable time period.

In addition to the app-based safety features, the electric-powered Arrow avoids the fire risk, fumes, and noise of gas-powered karts. The Arrow’s smart Lithium-Ion battery recharges from a standard wall outlet, and batteries can easily be swapped for hours of non-stop fun. Each rechargeable lithium ion battery lasts about 90 minutes. The two motors can power one wheel each, allowing more control over how much torque goes to each wheel.

“We heard from parents that they’re frustrated that kids are on their phones or sitting on the couch playing video games that often are about racing,” Bell said. “The parents want the kids to get outside. We wanted to create something exciting enough to make the kids throw out their video game controllers and get outside.” 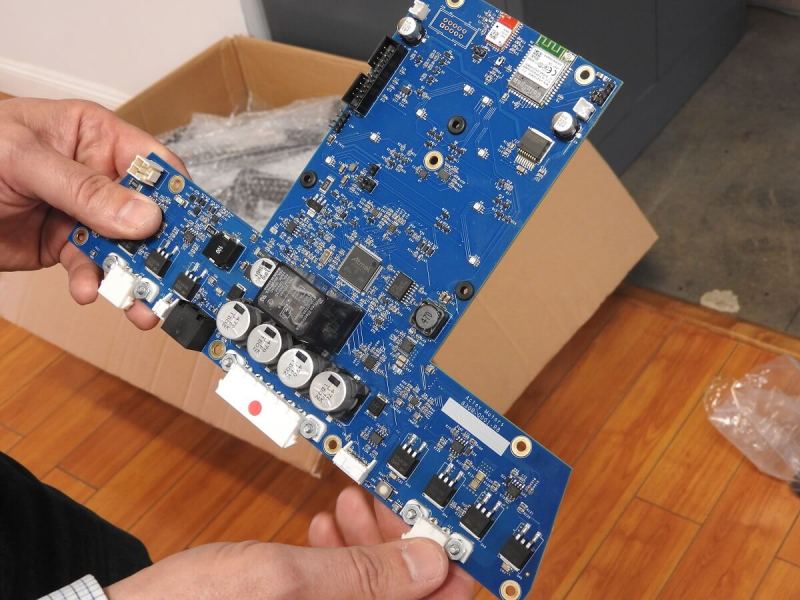 Above: Circuit board for the Arrow Smart Kart.

Bell said that the battery swapping is a good feature because kids often want to go more than 90 minutes, as their friends all take turns driving. Bell designed the electronics and materials to make sure the battery is safe, given all of the bad publicity about batteries causing fires in hoverboards and phones. There are multiple processors governing each subsystem.

Under the hood, the device has two motors. It also has a circuit board with an ARM-based processor with a proprietary operating system. Bell said that Fadell wanted the car to be customizable for do-it-yourself fans. You can buy a different kind of body kit, starting with the Formula Race Car body kit (red or silver). You can also buy Drift Rings, which allow the kart’s back wheels to slide around turns. The pedals adjust for different-sized kids.

“Adults can jam themselves into it,” Bell said. “It isn’t pretty, but they can do it.”

You will also be able to buy some smart cones that can detect the kart. Those cones can be used in various games, such as in speed-timed tests. And the kart has a focused laser on its front so that you can play a game of laser tag while racing around a track. If you push a button, you can zap the car ahead of you and cause it to slow. The kart comes with its own Ferrari engine sound, which makes a noise when you turn it on. The back tail light of the kart is the on-off switch.

Soon, new accessories will be available for the Arrow, including downloadable synthesized engine sounds from an online sound library. Additionally, the Actev app will soon let kids monitor their stats, such as total drive time and total distance.

“We wanted to keep it very Apple-esque,” Bell said. “We didn’t want a lot of knobs. It’s very simple. You push the tail light and it turns on.”

Fadell invested in the firm, which has raised $3.8 million so far. The company is now raising an $8.7 million round. It has eight full-time people. Bell wants to have controlled growth as the company expands in the future.

Bell said, “If you think about it, you can see how much Silicon Valley has impacted your life. It’s in your phone, your computer, your car, your entertainment, your TV, your cameras. All of these areas are smart. One area it hasn’t had a lot of impact is in your kids’ toys. They are still fairly dumb. We make the kart smart. It makes it safer and more fun for the kids. We’re having a blast with this, and this is just the beginning.”