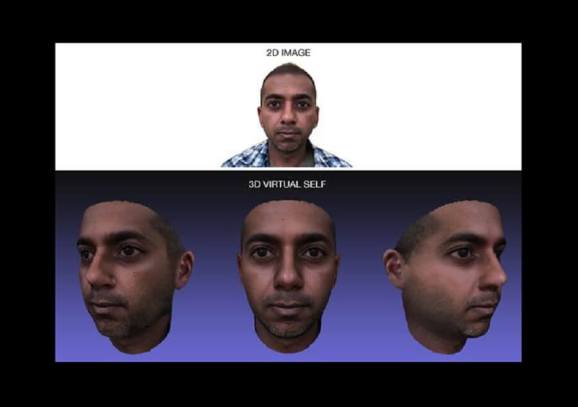 Oben can re-create your face in VR.

Oben has raised $7.7 million from Chinese investors so it can put 3D faces in virtual reality.

CrestValue Capital, the investment arm of the DunAn Group in China, led the round. Other investors included Cybernaut Westlake Partners, the U.S. fund of Cybernaut Investment, and Leaguer Venture Investment Co., the venture fund of the Research Institute of Tsinghua University in Shenzhen.

“Oben is fundamentally changing VR from what has traditionally been a simple, game-like experience by offering completely new interactions for those who want to travel to other worlds,” said Ming Fang, managing director of CrestValue Capital, in a statement. “Oben’s personalization of music and entertainment experiences in VR and AR is especially exciting, and we’re pleased to participate in the company’s growth.”

“Oben is at the forefront of innovation that is poised to move VR beyond its preliminary stage, and we’re tremendously excited to have validation from visionary investors who understand and value the uniqueness of our technology and approach,” said Nikhil Jain, CEO of Oben, in a statement. “In the same way a dream feels real because you are actually in it, VR needs to go beyond pure simulation and become a platform where users can interact and have shared and shareable experiences with their social circle. With Oben’s personalized, easy-to-create avatars, we’re shifting the entire experience from an individual one to a social one, and we make it accessible to everyone.”

Historically, creating a virtual rendering of one’s self required expensive hardware, hours in a professional studio, and thousands of dollars, making the technology inaccessible to almost all users. In contrast — and for the first time — Oben says it can quickly combine a person’s image and a simple voice recording to provide a personalized and a realistic virtual identity that both looks and speaks like the user.

Unlike current VR avatars that depend on cartoon-like characteristics, Oben translates a user’s character, personality, and individuality into a realistic 3D avatar. Individuals can use a smartphone to create a 3D virtual self and transport themselves into VR and AR environments.

Oben’s virtual self product is expected to launch in Q1 2017. Oben is a portfolio company of HTC Vive X, the accelerator program from HTC. In July 2016, HTC selected Oben as one of 33 participating startups out of the more than 1,200 companies that applied.

“Vive X looks to serve companies that can truly advance the way users experience VR, and Oben delivers,” said Marc Metis, vice president in charge of the Vive X program, in a statement. “We’re thrilled to have Oben as part of the HTC Vive X program, as their brilliant technology makes it incredibly easy and fun to create a realistic virtual version of yourself in VR that goes way beyond typical avatars.”

Oben was founded in 2014 and is housed at tech incubator Idealab. Oben has 20 employees and previously raised $150,000.