A low-profile robot glides silently over a magnetic strip on a cement floor, operating unnoticed in an assembly plant. When someone walks in front of it, the robot stops and waits. If you press a button on one end of the plant, you can summon the bot, then connect a few metal carts to make a robot-powered train and instruct the bot to deliver the parts. This process happens over 180 times per day, seven days a week. Before the bot took over, a human operator pulled the metal carts by hand, over and over again. This is not a wonder of engineering per se, but it is amazingly practical and helpful.

I noticed the bots right away, but then again, I’m a major Star Wars fan. My dad took me to see the original movie when it first debuted in 1977. I wondered at the machine learning in the movie (a bot’s ability to adapt and adjust to the situation on its own) and hoped it would someday become a reality. Here at the plant, I marveled at the autonomy — the bots charge themselves automatically and need no supervision. It is Star Wars in living form. 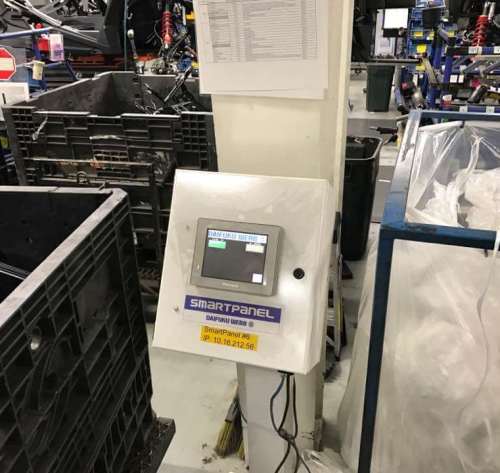 Above: In the Polaris plant, workers can summon the delivery bot.

These “robots” at Polaris do use machine learning — they can detect obstructions and determine when it is safe to continue. Once, when the bot stopped for a large pile of metal tools in a cart, it noticed when someone moved the cart, but then stopped again rather suddenly when it noticed the path was not quite clear.

“That seems like an error,” said Kurt Bickler, the manufacturing systems manager at Polaris, one of the largest companies in Minnesota, known for their snowmobiles and off-road machines. The bot should have waited initially until the path cleared; apparently, the stop-start motion is not intentional. It seemed like a minor bug to me.

Last year, when Polaris tested a different wheeled robot in their plant, it kept going around objects and created a distraction for other employees and a safety concern. The new delivery bots work much better. “We don’t even call them ‘robots’ anymore,” said Bickler, explaining how they move silently through the plant.


I was impressed by how it all worked. There are four Jervis Webb Model 100TT delivery bots in their high-tech plant, located in Roseau, Minnesota. They have saved 27 hours of human labor per shift so far during phase one, and plan to deploy another six bots in phase two. Bots never complain about getting the flu or the bad weather. They don’t seem to realize, unlike the humanoids on a show like Westworld, that they lack consciousness.

The AI we use today is a long way from C-3PO. None of the delivery bots at Polaris can speak Bocce. In fact, they don’t even know English. While tech luminaries like Elon Musk worry about artificial intelligence subduing the human race someday and creating a robopoclypse, these “dumb bots” are quietly changing how the world works.

Think about that person who used to pull the metal carts around. It’s repetitious, not to mention back-breaking. Bots can do the mundane work, augmenting the more intricate process in the factory. Eventually, bots will take on more duties, freeing up the humans even more.

I mentioned some of these existential ideas during my plant tour. “Do you think this factory will be run entirely by robots someday?” It’s a pointless question. They will. There’s no question about that, but it might take a few decades.

I mentioned how Polaris is a company that makes products to help humans perform menial tasks, like hauling rocks or carrying a load of supplies. Even the “entertainment” products (like the Polaris RZR, which goes 0-60 in about seven seconds) are meant to serve our needs (mostly for fun). Someday, the most menial tasks will be augmented by robots, and that is a wonderful thing. Those metal carts I mentioned? A human operator still loads them with ATV parts, then still fits them to the chassis. It’s a good example of how AI at Polaris is meant to streamline. The age of robotics involves augmentation, not replacement.

I kept wondering about what could be augmented next. It turns out Polaris also uses bots for injection molding: The parts are too hot for a person to touch after they are formed, humans would need to reach inside of a high-temperature chamber to grab the parts, and it’s an ergonomics nightmare. The company also uses bots for welding. An operator loads a suspension onto one side of the bot, presses a button, and a bot performs the welding with incredible precision — with sparks flying everywhere.


One of the challenges has to do with quality. Workers at Polaris use a tablet at the end of the assembly line to take photos of specific parts that must pass an inspection. The photo evidence can be used to determine if there was an assembly problem with that unit. Why can’t a bot do this today? My guess is that image recognition technology is not advanced enough — Google might know how to identify a sailboat or President Obama in a photo, but not whether a screw is tightened all the way. 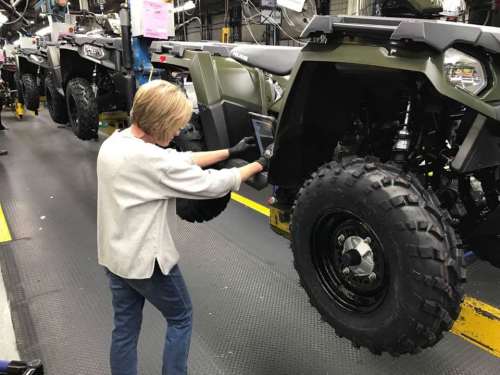 Above: On the assembly line, a worker snaps a photo as verification. 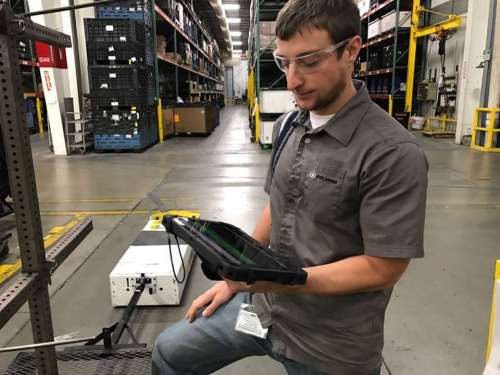 Above: Matt Younger, a project engineer at Polaris, shows how the delivery bots work.

Another challenge has to do with our perception about bots. We don’t always understand them or like them, especially the ones that look like Arnold Schwarzenegger. The delivery bots at Polaris aren’t replacing a human. Yet there’s a perception that bots are taking over the labor force. That’s one hurdle to overcome.

How will bots progress from here? I know one possibility for Polaris. At the end of the assembly line, a human driver gets to rev up the engine of every newly minted off-road machine and snowmobile and make sure it works correctly. It seems like fun, until you have to do that 200 times in a day. Could a bot squeeze the throttle and perform the test? That seems likely. There’s no real inspection involved, other than a computer monitoring fuel intakes and gear ratios. Anything that seems robotic can be robotized.

I believe robots will serve alongside us, performing mundane tasks — especially in the home. Humans will move into an “overlord” role (excuse the term) making sure the bots function properly. It might even mean the employees at Polaris can spend more time hunting for deer.