GamesBeat: It seems like the people who master the medium will be able to produce hits, though. More so than people who are just trying to figure it out.

Thompson: It’ll quickly become very capital-intensive, in spite of Unreal and Unity’s attempts. It’s getting really expensive. Those will be big productions. Don’t you think?

Dhillon: Totally agree. What we start to see — when people buy a PlayStation now, they’re excited to try — have you played Batman? People want to be Batman, is how they position it. It’s this first-person action-RPG thing and you feel like you actually step into the role of Bruce Wayne. You’re selling people on the fantasy at that point. It’s a four-hour experience. It’s not that long. It’s not a fully robust explore-the-world-of-the-Elder-Scrolls endless giant MMO capacity.

That’s really expensive. When you’re building a living world, that’s like Peter Molyneux used to talk about with Lionhead. The trees growing from a sprout to an oak in the time you go from this land to that land. A living, pervasive, breathing world is super exciting. We’ve seen a couple of companies doing a lot of distributed cloud compute to help these environments and worlds be more detailed and interactive and destructive. I’m excited, but I think it’s another four or five years before we see games with that level of living worlds coming to life. 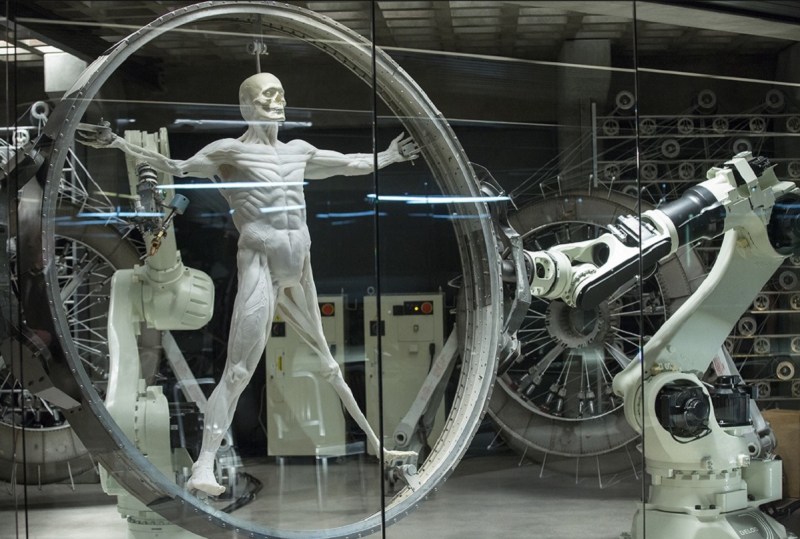 GamesBeat: I’m interested in this idea of science fiction inspiration. You have Ready Player One. There’s a lot of things out there that were once science fiction and now don’t seem so far away. It seems like science fiction might be becoming relevant in a way that tech investors maybe never used to care about. I remember this quote from Will Wright  — “Everybody’s business plan in Silicon Valley is a dog-eared copy of Snow Crash.” Things like Second Life came out of these visions. We have Westworld now, which everyone’s very excited about. I wonder what your own view of that is. Have you seen a lot of ideas to look for in science fiction that are also probably not as far away as we maybe thought?

Thompson: A few examples come to my mind. You can go back to Orwell or Ray Bradbury and paint some darker pictures. What is humanity and civilization going to be like when we don’t have jobs anymore?

Dhillon: Do we all end up becoming the future in WALL-E, floating around in hover chairs? This is one of our favorite conversations, when we talk about science fiction inspiration and how it’s being realized in today’s world. Think about Star Trek, with the real time universal translators. A company in New York right now called Parrot uses natural language processing to hear and translate, in real time, conversations between people of different European Romance languages.

GamesBeat: You should get a sci-fi author on board as a partner.

Dhillon: Come in as chief futurist. AOL has one, you know. His name is David Shing. He does these hilarious Nostradamus-style forecasts of the future. You have to get a look at one of them.

GamesBeat: I think I heard him speak once.

Dhillon: Seeing him is something else, once you see what I’m talking about. But yeah, it’s very exciting, when you can use a science fiction archetype as a quick condensed view of, for example, what a startup is pitching. It’s a pretty cool initial hook.

GamesBeat: It seems like some of these very sci-fi-like things are going to remake a lot of industries. If you apply deep learning to everything that’s out there, all the old things that don’t use it become obsolete. The ones that do become much better at doing whatever they need to do.

Thompson: Like figuring out what needs to be done! [laughs]

GamesBeat: If you don’t have a deep-learning neural network behind your marketing tech….

Dhillon: Our colleague Linus Liang was teaching a big data class at Stanford before he joined us. He has incredible insights. He’s been bringing me up to speed on some of this stuff from a 101 perspective. CNN’s deep learning, the difference between all of it. I read an article on TechCrunch about “WTF is machine learning?” and then it builds on itself over time and gets to deep learning at the very end. 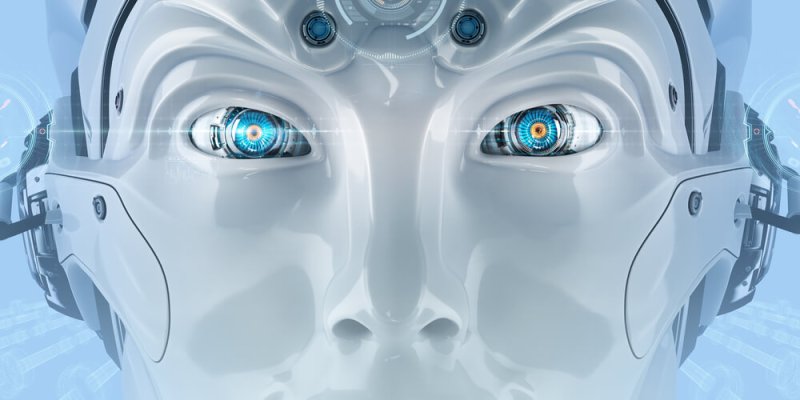 Above: AI is coming, and the chatbots are here.

GamesBeat: With the different opportunities, are you looking at VR or the game subset within VR compared to other categories that are more or less attractive, like maybe A.I. in general?

Thompson: It’s all interesting. We’re still doing stuff toward autonomous cars. That’s huge and transformational. We’re trying to invest in themes that will give us a half-dozen or a dozen investments, big movements. With A.I., it seems like that’s mostly applications for transforming a lot of existing things. Where does the application of the technology create something new, something disruptive to existing players? There are those opportunities, but they’re not as obvious. You don’t just invest in A.I. anymore, as a thing. It’s usually as a tool.

Thompson: One thing I worry about, a lot of this technology is reinforcing existing players, the power they have. If you’re Amazon, you can become really hard to compete with. They have that much more data and ability to be much smarter than another retailer. That’s why Wal-Mart bought Jet. They need to do something pretty quickly, because they don’t know nearly as much about their customers as Amazon does. Amazon leverages that data.

Dhillon: And upsells you on everything. Everything brings you back to putting stuff on your basket. An added suite of services with Amazon Prime. Video on Prime. Delivery benefits. Keeping you within the Amazon walled garden. Now with Echo. I’m a vociferous user of Echo. To the point where I don’t think — even if Google Home Hub was double the speed, double the accuracy, I still don’t think I’d switch off, because I’ve become so glued to its efficiency. “Order more kitchen towels. Order my Uber.” I’ve become so used to the syntax of talking to it. I go to hotel rooms and I still do that when I walk in, out of habit.

Thompson: It’s huge returns on scale, what these technologies really mean, more than being able to create new businesses in these spaces. It’s all about the data. 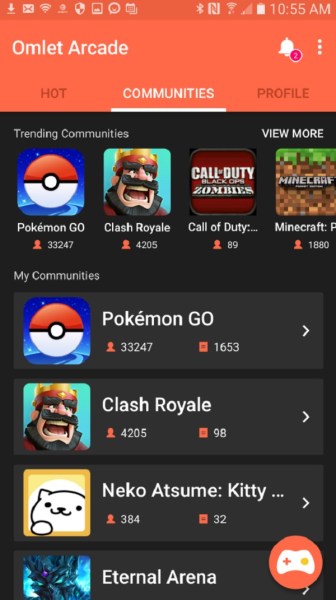 Above: Omlet Arcade creates a community around games like Pokémon Go.

GamesBeat: How do you think about platforms and whether you can maneuver to open platforms or help create open platforms? I saw a project out of Stanford that was concerned about social being a closed platform. They started a project and wound up doing a new social layer for games that’s the only social layer available for Pokemon Go right now. They didn’t necessarily want one company to own social, so they did some research. They came up with Omlet Arcade.

Thompson: I’d love to get on that kind of project. Right now, Netflix, Amazon, Apple, Facebook, they own all our data. They resell it to market back to me. Ultimately, why can’t it be my data? I’m the owner of it, we’re each the owner of our own data, and we choose to pool it and make it available on a level playing field to whoever brings us the best service. That should be able to happen, in theory.

GamesBeat: So a world of open platforms is fundamental to having good startups.

Thompson: That’s one of the problems with mobile. We’ve given up the web, so we’re tethered to AT&T.

Dhillon: Same thing goes now when you look at the evolutions within iOS 10 and iMessage, turning it into a WeChat kind of model. Is messaging going to become the new browser? Are GIFs going to become the new medium of expression for a millennial audience? A picture is worth a thousand words. There’s a reason emoji have risen on the back of mobile, with the people that use it.

Whether Echo or Home or any of that stuff — with voice becoming a new input device for you to interact with stuff, rather than tapping and pushing and gesturing, there’s a whole new season of walled ecosystems that’s emerging. More competition is better for developers, obviously. But there’s nothing — the most free one in VR is probably Steam. You have the least constraints as a developer to distribute the content you want to on Steam, as opposed to working with PlayStation, for example.

GamesBeat: If you want to circle back and direct game-specific entrepreneurs in some way, the kind of pitches you get, what would be some of the things you’d say? You’re not as interested in mobile, but you’re interested in VR.

Dhillon: We’ve been fairly public with our views. We’re unlikely to do another new mobile gaming investment. It’s super early for VR gaming, although we are starting to take it very seriously. There’s a deal we’re looking at right now in that space.

Thompson: But we’re not necessarily out there looking for a lot more.

GamesBeat: You already get enough pitches as it is?

Thompson: If we see something really exceptional — there will be exceptional, interesting teams, and we’d like to hear about them.

Dhillon: There’s plenty of other enabling technology that can contribute to games, but also the cinematic and short-form VR experiences. The infrastructure layers, laying the cable kind of areas. That will probably fit more firmly within our remit right now for where VR and AR and MR are at. Companies in the portfolio that represent that are 8i, down in Los Angeles and New Zealand, specialists in hologram capturing and rendering technology, and Eonite, which is a great example of best-in-class positional tracking that will master opportunities for inside-out, getting rid of the need for light stations in the future. Companies like that, in the infrastructure layer, are interesting for us still, within VR. We think there’s an opportunity there.

Thompson: At the same time, the chances of building a multi-billion-dollar company there — it’s not obvious. They ultimately fall into the risk of being middleware.

Dhillon: The likelihood there is a lot of these highly technical-driven teams that are incredibly specialized in computer vision applications, for example—the major platforms are likely to need that kind of expertise in the near term. A firm like Signia, with our fund size and our return expectations, we understand that it’s a great learning opportunity to see, when you’re selling picks and shovels, who’s going to be using them, for when more margin-generating businesses like content become an opportunity. You know where to look at that point. In the near term you can still protect your down side with these technical teams that are likely to get lapped up for $100-200 million, when you look at the supposed valuations Apple puts on the teams it’s bought.

Thompson: Either they likely sell at some point, or they become irrelevant.

Dhillon: Exactly. Finding out the right time for that and positioning in the right way is paramount.

Thompson: Applications and use of VR are something we’re interested in, too. Sunny mentioned already that for AR and VR, outside of gaming is probably bigger, sooner, faster.