GamesBeat: You have a more diverse cast than usual.

Kurosaki: We’re part of a federation called the UNSA. It’s a multinational organization. There are representatives from many different member nations. We wanted to reflect that in our cast. We also have—again, because it’s a first-person shooter, you are the cameraman, basically. You’re the cinematographer of the story. The person who’s really the lead is Lieutenant Salter. She’s who you see on screen more than anyone else.

GamesBeat: She’s an interesting character in that she gets the bad news about somebody disappearing from the team, and she doesn’t crack. You think that maybe she’s about to break down, but she doesn’t.

Kurosaki: She’s a professional. She has a job to do. It’s interesting how people respond to crisis situations and just compartmentalize things to get through what they need to get through. I don’t think there’s any reason why she would be any more emotional or have any reason to cry any more than anyone else would. If we had her do that, the obvious conclusion people leap to is, “Well, she’s crying because she’s a woman.”

It was also important for us to show two characters who are comrades. They’re professional partners. There’s no reference to anything about anyone’s sexuality, anyone’s personal life. It’s just not germane to what’s going on for them right now. 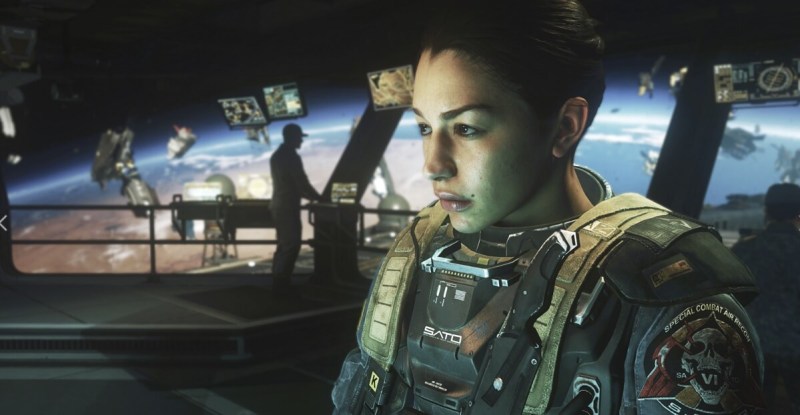 GamesBeat: It really does feel like just a day in the life.

Kurosaki: Right. It’s that kind of video game real time. It’s probably about 24 hours. Again, that was by design. We didn’t want to have Reyes say, “Hey, I’m going to get some shuteye” and then he comes back like, “Okay, now I’ve thought about things.” He doesn’t get the luxury of being reflective. He has this relentless foe that’s going to keep coming for him, who’s not going to rest, so he can’t rest either. This is a war that’s being dictated by the enemy. Salen Kotch started it and it’s on his terms.

GamesBeat: Right. I just think of him as Jon Snow from Game of Thrones.

Kurosaki: Yeah, the actor is Kit Harington. He’s designed to be the perfect foil for Reyes. This is Reyes’s first day at the helm. It’s definitely not Kotch’s first day. Reyes has to learn very quickly that you can’t bring everyone home and that the mission must come first. Kotch already knows that better than anyone else. The first time we see him, to demonstrate how much he gets it, he shoots his own man in cold blood. He says, “Care clouds judgment. That’s why you can’t win.” Not only is this a guy with experience, he’s a guy who gets what it takes to win.

And on top of all that, he has his whole fleet at his disposal. You’re down to two remaining ships. You were talking about how the good guy always wins the war. At the end of this story, you haven’t won. You’ve just prevented a loss. You stopped this war from ending the day it began. Now you’re at parity with them. They’ve destroyed the majority of your fleet at Geneva, you’ve destroyed the majority of their fleet based on the ship assaults you’ve gone on and taking down the shipyard. Okay, reset. Now the war starts in earnest.

GamesBeat: It wasn’t clear to me why he was so pissed off. I get the impression of oppression, or perceived oppression, from Earth?

Kurosaki: The SDF, the Settlement Defense Front, SetDef, they’re all originally from Earth. Our jumping-off point for the story—it’s a bit of a ripped-from-the-headlines, what-if scenario. Studying war stories, or studying war in history frankly, all wars for the most part are about resources. All the big wars have been resource wars. We took that as a given and we looked at the fact that we’re running short of things like rare earth minerals, peak oil, stuff like that. We have a scarcity of resources and energy here on Earth. If we’re going to continue life as we know it, we need a different source of energy and materials.

These things are in great abundance out in the solar system. Elon Musk is talking about how he foresees humans becoming a multi-planetary society with permanent settlements on Mars and moons like Europa.

GamesBeat: So it’s a bit like the colonies shaking off the British? 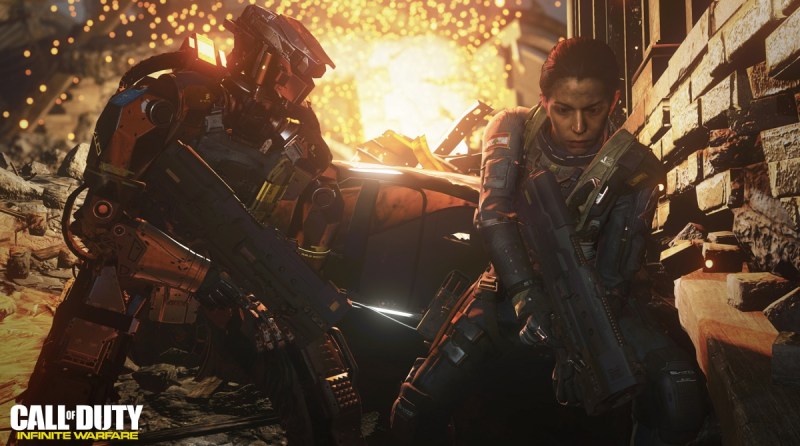 Above: Ethan and Salter in Call of Duty: Infinite Warfare

Kurosaki: You could see it that way? If the colonies were also dogmatic believers in martial prowess and brutal on human rights. That distance between Earth and where SetDef calls home has allowed this movement to take hold. They start to see themselves as the worthy inheritors of the solar system. They believe that not being free breathers – that they have to live in these harsh conditions – makes them more worthy somehow. They’re going to remake Earth in their own image.

GamesBeat: It seems to start in media res. You don’t see anything Earth might have done, so it seems more like a Pearl Harbor attack.

Kurosaki: We draw a lot of inspirations from things we see. The good guys are part of this loose alliance I talked about, this multinational alliance. We see here on Earth now, when Russia invades the Ukraine—we don’t do anything about it. We “strongly condemn these actions,” but no one wants to go in there, because you can’t get unanimous support. Some people are doing business with Russia. There are all kinds of entanglements.

If we need that energy and those resources that are out there, and you have a dogmatic movement that’s taken hold and they say, “We’re going to have Titan for ourselves,” and they kill a bunch of people in the process, then you have people on Earth saying, “Uh, what do we do here?” The SetDef is able to grow more and more brazen, and we start with them going into the black site that is Europa and taking it for themselves.

World War II had some analogous situations. America was only drawn into the war when it was directly attacked. It could have gotten involved much sooner. It’s a similar kind of thing. We wanted to paint things in pretty clear terms. The SetDef are the bad guys. We show that they’re the bad guys. They do bad things. When you’re on Titan, you see what happens when SetDef comes into a neutral territory.

All these places off-planet should feel hopeful. They should feel like places people will go when they go to work out on an oil rig, or they’re going to be an ice trucker, or a longshoreman someplace remote. It’s dangerous work with good pay and the promise of a better future afterward. When SetDef rolls in it’s the stormtroopers rounding people up. People just disappear. Did they escape? Who knows?