Social-game developers have a tough challenge trying to keep people coming back to their title for as long as possible, but no one strategy is going to hook everyone — and that’s where Optimove wants to help.

Optimove is a retention and marketing firm that has broken down social-game players into six major categories and provided a look at some of the actions that developers can take to win them over and maximize lifetime value. While a big part of the free-to-play space is obsessed with user acquisition and the costs of marketing, more studios are starting to put their efforts into retention and understanding their customers instead because it’s more cost-effective. And Optimove wants to make it even easier.

This is someone who has installed or registered to play a game but hasn’t made any in-game transactions through the first 14 days. Nearly 34 percent of all paying players make their first transaction after the first two weeks, which is a huge chunk of potential revenue.

“The goal with this segment is conversion. Patience is key, as it is critical to quickly engage New Non-Spenders during the first few days after registration with the goal of motivating them first to become highly active and only then trying to push them towards their first deposit. The strategy should be brand awareness and building, content marketing based on gameplay behavior, and only then a push for first payment.

“This is also a good place to use predictive models to discover consumer surplus and discover for each player the payment sweet spot. Bear in mind that the data also shows a direct correlation between the activity levels of New Non-Spenders and the likelihood of them converting to become paying players, thus generating revenues for the site. New Non-Spenders with higher activity levels are worth more to the gaming operator on average.”

Once someone makes their first payment, their behavior typically changes. A New Spender is someone who is in a 14-day period after their first purchase. Capitalizing on their willingness to spend requires quick targeting from the developer because second purchases come the next day in 39 percent of cases. And 64 percent come in the first week.

“According to our data, New Spenders who convert quickly (up to two days after registration) have a higher LTV compared to later converters. Be aggressive during this time period, and make sure the game experience is good. Gamified campaigns can work here (for example: three payments over three days will open bonus stages on day four), as well as “welcome packages.” It’s important to view New Spenders as being in an “incubation” stage. The goal is to provide them with offers that will encourage them to become Active Spenders and retain the payment activity. Provide different incentives to players based on their previous activity. For example, players who used to be very active before their first payment should receive enticing offers like gamified campaigns and messaging that will help them understand the value of being paying players vs. non-paying players.

“Players who had no previous activity before their first deposit should be addressed differently. These players have not yet achieved brand awareness and are probably not completely familiar with the product yet. In cases where they are very active, try to increase their payment activity. Otherwise, make sure they are engaged with the product first.

“You should also be aware that if the two-week time window passes without any additional payments, the cost of reactivation is usually equivalent to acquisition costs.”

This is someone who has spent money on a game on two distinct days within the last two weeks. These include the whales, the top 1 percent of spenders who generate 30 percent of revenues for most games. 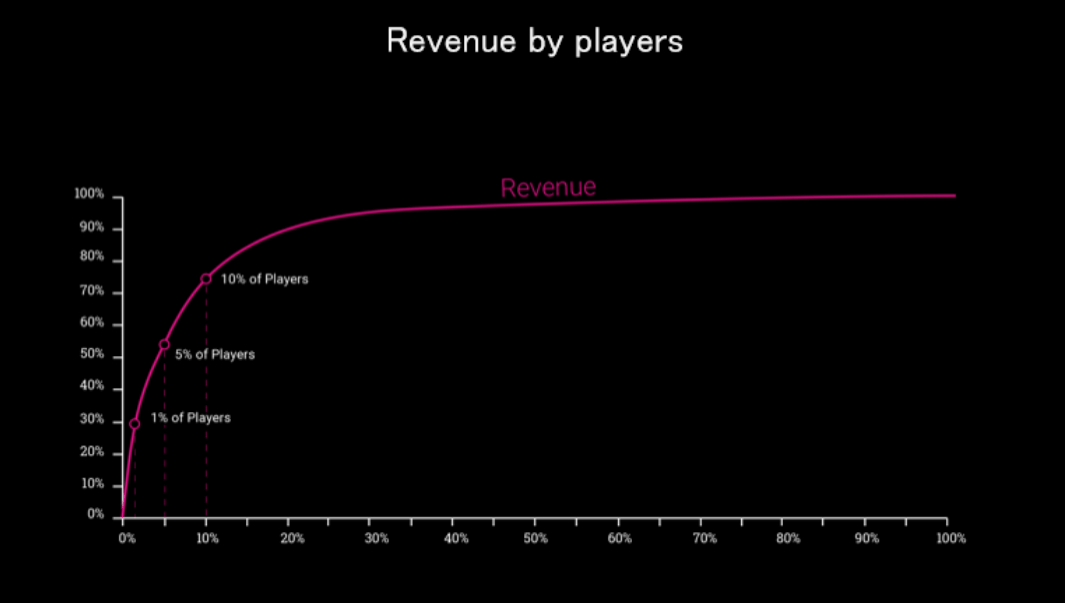 “Since 5 percent of active players bring in 55 percent of monthly deposit amounts, operators need to make sure they are well aware of their top-tier 5 percent. This means monitoring their activity on a daily basis and contacting them after important events like big wins, big losses, and [level] changes. Make sure these players are well aware that they are VIPs. If you don’t have a VIP plan in place, this is your [absolute] first priority. They should get limited edition/special games access, event invites, special gifts, and a personal touch.

“In addition, tracking the highest achieved tier of each player is also important. Players who used to be part of the 5 [percent] group but are no longer there need to receive better treatment since they have higher potential.”

These are players who have spent money on a game and are still playing but haven’t made a consecutive purchase in more than 21 days. Optimove argues that this group potentially signifies a problem in a free-to-play game’s economy.

“The goal with this segment is to push to the next payment, as post-payment the likelihood of churn decreases. In order to understand the potential of these players, we use “Payment Activity” segmentation based on three attributes: days since last payment, number of payments, and payment amount. This segmentation identifies recently high-tier payment “churned” players, long time since last payment low tier players, etc. in other words, the amount of past payments [reflects] a player’s likelihood to pay in the coming month and the potential of loss in case of churn.

“Players who were in the high-tier payers and have recently stopped paying should receive stronger offers with bonuses for higher payments. On the other hand, players who stopped paying a long time ago should receive lighter offers that will hopefully drive them to make another payment. Also note that some of these players may be in risk of churn. Of course, you can incorporate into this logic the identification of risk of churn players, and try to engage them to play first before aiming for another payment.”

When a paying player leaves a game for more than 21 days, they are now known as a Churn Spender. This is a group that developers could potentially win back with the appropriate targeting and updates.

“The goal with this segment is reactivation. Within the Churn Spenders [segment] there are lots of low-hanging fruit. In order to identify the future potential of each player within this group, it’s important to address both churn longevity and activity tier pre-churn.

“Another parameter to watch is whether this is a first visit to the Churn Spenders lifecycle stage. By looking at the number of visits to the churn LCS we can estimate whether each player is in actual risk of churning and never coming back or whether they are only taking some time off. Players who are at the churn LCS for the first time need to get stronger promotions and more focus compared to players who have already churned a few times.

“Seniority is another telling factor. Players who’ve churned after 90 days are the most likely to re-engage compared to players who stayed with the game for a shorter or longer time period. Ninety days is the peak duration since players who have lasted that long have a deep brand awareness on the one hand and have probably not played long enough to go off the game completely. After 90 days of inactivity, likelihood of reactivation slumps dramatically, and it’s worth trying to cross-sell other titles.”

Finally, this is a player who has gone full cycle. They went from Active Spender to Churn Spender, and they are now back in the game. They will likely churn again quickly, according to Optimove, so it’s important for developers to pay attention to them.

“Senior players who churned recently and have been reactivated don’t need an introduction to your brand and product. Players who churned a long time ago or had lower seniority probably need to readopt their brand awareness and therefore should receive messaging of a different nature.”

It’s unlikely at this point that any successful mobile developer is unaware of these various stages of a social gamer’s relationship with a title. But building an understanding of these categories and understanding how to act on them is still crucial to any burgeoning studio.

Of course, understanding and acting on players requires collecting and sifting through massive stacks of data, and knowing you have to do that and having the capability to do it are two separate things. This is why the business-to-business tool market is so big for social and mobile gaming.

And it’s also why you see even some of the biggest developers, like Blizzard, take a more one-size-fits-all approach that involves consistently adding new content and events that have a strong appeal to every kind of player along Optimove’s spectrum.