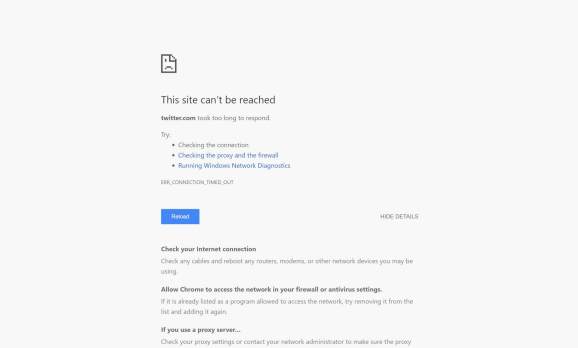 The company has not yet issued an update about the incident on its status page on Tumblr.

But when I opened Facebook just now, I found someone complaining about Twitter being down at the very top of my News Feed. I can’t check Twitter because, you know, Twitter is down. There is not even a fail whale to see; Twitter retired the fail whale years ago. You just get a browser error.

Downrightnow.com currently shows that Twitter is having a “likely service disruption.” And Downforeveryoneorjustme.com says Twitter “looks down from here.”

Twitter also went down as part of an internet meltdown of sorts on October 21.

Update at 10:18 p.m. Pacific: When I refreshed TweetDeck on the web, I received the error message “Unable to connect. Please check your network.” But my connection is fine. So I went back to Facebook, and there was a brand new post at the top of my News Feed about Twitter being down.

Update at 10:20 p.m. Pacific: Twitter.com and TweetDeck are coming back for some people. Including me. But some parts of Twitter, like Twitter Analytics and dev.twitter.com, are slow to load. Meanwhile, Twitter has not provided a statement through its main accounts or its Tumblr page regarding the outage. Steve Ragan of CSO Online says the incident was caused by a BGP error.

Update at 10:43 p.m. Pacific: Downdetector.com indicates that some people are still having issues; officially the site says there are currently “problems at Twitter.”

Update at 11:09 p.m. Pacific: Twitter Analytics and dev.twitter.com are loading now, and there are fewer reports of issues on Downdetector.com. Twitter appears to be back for the most part.

Update at 11:18 p.m. Pacific: The website status.twitter.com confirms that Twitter was “intermittently unavailable for some users.” Twitter says that users may have had issues starting at 9:46 p.m. Pacific and that service was restored at 10:18 p.m. Pacific. “Engineers continue to investigate the root cause of this incident,” Twitter says.

Update on November 7: Mazdak Hashemi, who runs infrastructure and operations engineering at Twitter, says in a tweet that the cause of the downtime was a “network routing misconfiguration during internal testing.”