Game developers know that in-game ads are important, but they don’t know the best way to approach them. That’s the conclusion of a survey by mobile game marketing firm DeltaDNA.

The study from Edinburgh-based DeltaDNA shows that many developers are leaving cash on the table over fears of how ads impact player engagement, enjoyment and retention. That’s a problem worth addressing in the $36 billion mobile game industry, where advertising has become a must for developers who want to get their games better attention in a sea of competition.

The results show 36 percent of developers fear that increasing ad frequency will have an adverse effect player engagement. Another 29 percent say it will affect player enjoyment. 14 percent say player churn is their primary concern.

More than half of developers (52 percent) feel unsure whether they are adopting the right ad strategy for their highest monetizing free-to-play (F2P) mobile game, while only 3 percent described their approach to advertising as effective.

DeltaDNA said developers see advertising as a necessary evil, but also an important monetization opportunity. Yet it only accounts for 35 percent of revenue, down from 38 percent in 2015.

The most integrated ads are banners (50 percent) and rewarded video (44 percent), while interstitials have fallen off a cliff, down from 67 percent to 21 percent. Video (32 percent) and playable (10 percent) ads are increasingly popular formats. 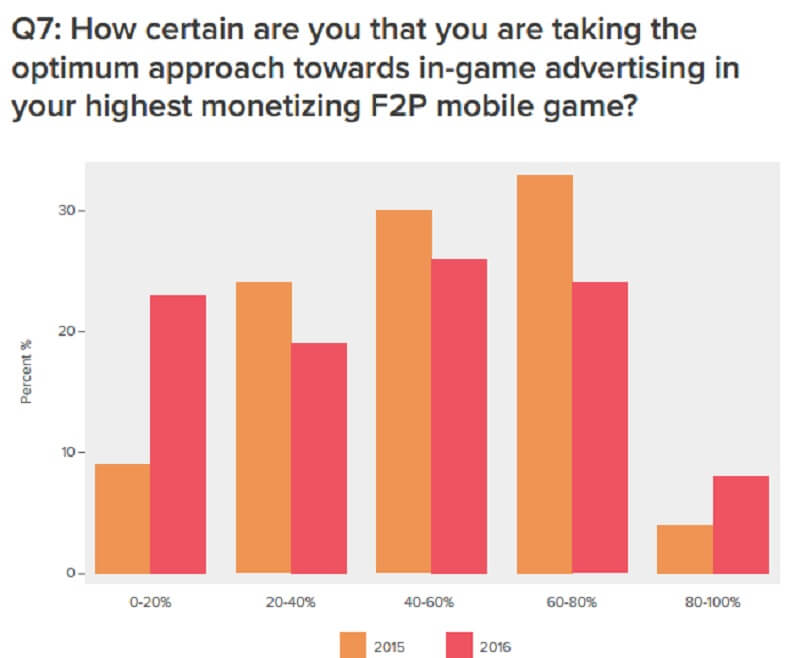 More developers are serving one ad or less per session than twelve months ago. Developers clearly lack confidence, with many describing their approach to ads as unsure (10 percent), cautious (22 percent) and experimental (28 percent).

Mark Robinson, CEO of deltaDNA, said in a statement, “Ads are now integral to the monetization of most F2P games, with some players really valuing formats like rewarded video, so it’s concerning, but not surprising to hear that a year after our first ad survey, developers are feeling less confident and more uncertain about how best to use ads. The problem is that most developers don’t have the technology to be able to evaluate the effect of ads on player behavior, which is fuelling these fears over the impact of ads on player engagement, enjoyment and retention.”

He added, “But developers have much to be positive about, as recent studies have found little relationship between ad frequency and retention. However, what’s key to the success of any ad strategy is good integration of ads within the game experience, which our data shows, can uplift total revenue by up to 400 percent, through enhanced IAP and rewarded ad engagement, without impacting retention.”

With less than 1 percent of players ever spending money in F2P games, advertising represents the natural choice to monetize the remaining 99 percent. But does taking an ultra-cautious approach to ad frequency improve retention, or are developers just leaving cash on the table?

Anonymized game data from the DeltaDNA platform was recently used to facilitate a separate study into this area.

“We evaluated DeltaDNA game data which associates ad engagement to the individual player, and enables its comparison with players’ in-game behaviour,” said Nick Ross, assistant professor for business at the University of San Francisco, in a statement. “This allowed us to determine that there is no evidence to suggest that the density of ads shown by a game in the first session affects whether a player returns for a second session.”

The detailed survey includes responses from 234 mobile games publishers and developers about their experiences and attitudes towards monetization through ads in their highest monetizing F2P game, and the challenges of balancing player experience with ads and in-app purchases (IAP).