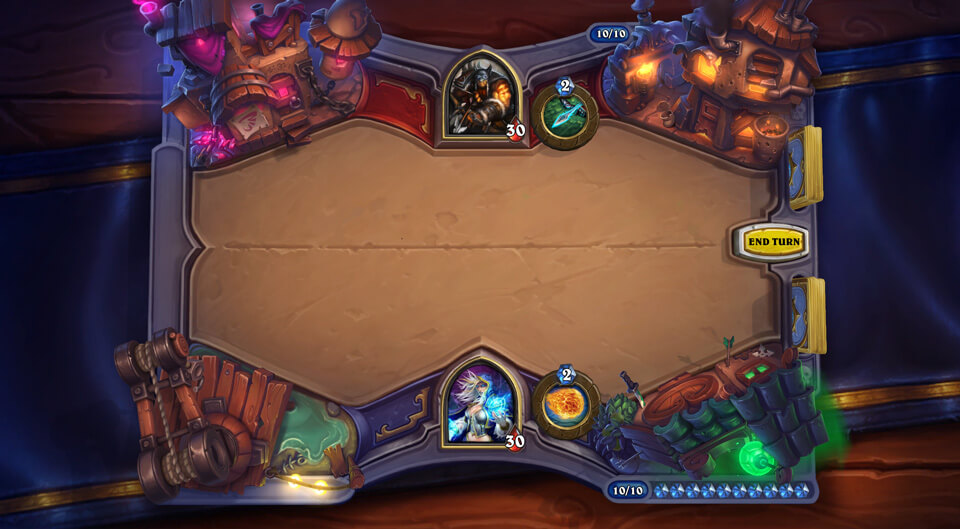 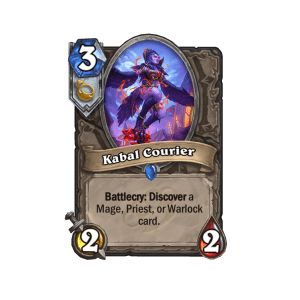 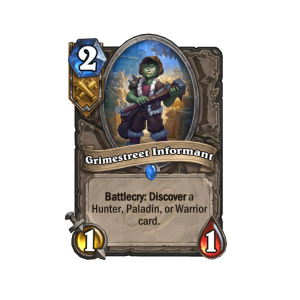 Few cards in the new expansion, let alone the entire set, offer that kind of clearing power, and that’s deliberate, the developers said.

“We aren’t pushing for that kind of deck. We don’t want the thing you couldn’t anticipate to be 30 damage to the face,” Davis said. 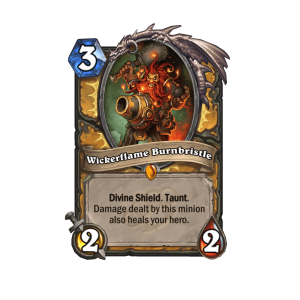 Above: The Wickerflame Burnbristle is surprisingly powerful in a defensive deck, despite its small stature.

Blizzard showed off just a few Legendaries at the show, but they all fascinated us, and not just as end-game cards. The 3-mana, 2/2 Wickerflame Burnbristle turned out to be surprisingly versatile. It has divine shield and taunt, making it a hard minion to get off the board, and damage done to this minion heals your hero — a nice early-game card that provided some strong benefits in a defensive deck.

For decisive end-game plays, we liked the 10-mana, 7/7 Kun the Forgotten King. He can grant you 10 armor, useful for warriors and those at low health, but he can also refresh your mana crystals — essentially, giving you a 7/7 minion and a second turn. Playing Kun changed the course of at least one match in the games I played.

But the 4-mana, 3/3 Kazakus generated the most Blizzcon buzz. Rather like Reno Jackson (and potentially used in combination with League of Explorers member), it requires that your deck contain no duplicates. If you meet that condition, its battlecry creates either a custom 1-mana, 5-mana or 10-mana potion.

As you select more mana, your potions gain more and more powerful effects. For a 5-mana potion, you might do five damage and summon two random demons (not just cards from your deck and not just for warlocks), for example. For each effect, you have a choice between three options, building a custom potion that can include a huge number of combinations.

It was surprising how often I and my opponents chose the 5-mana option for gameplay. Those potions are still incredibly powerful, though less gamebreaking than their 10-mana counterparts. And given Kazakus’ 4-mana cost, they slot in perfectly as a followup cast just when you need it most. 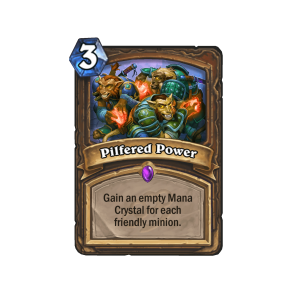 Above: Pilfered Power is situational at best, but interesting.

The 0-mana Counterfeit Coin was a nice mana boost, adding one crystal for this turn only. It’s a good addition for ramp decks.

The 5-mana, 5/5 Lotus Assassin gains stealth every time it attacks and kills a minion. Realistically, you may sacrifice this card against a heavy-hitter deck, but it was very useful for picking off zoo deck minions and for surviving one extra hit after a bigger takedown — one of a hunter’s Call of the Wild trio, for example.

For zoo deck players, Pilfered Power costs 3 mana but adds a mana crystal for every friendly minion you have. It’s clearly a situational use card at best, but in combination with a “fill the board” card it could represent an extra turn.

Another interesting play for defensive decks is the 1-mana, 2/2 Mistress of Mixtures, which has the deathrattle effect of healing both heroes for 4. It’s essentially the deathrattle version of the 4-mana, 3/5 Refreshment Vendor (whose battlecry heals both players), with a much lower mana cost. It was useful in our play, but only when held for a later turn as a filler.

“I love this point of the release cycle,” Whalen said. “We’re revealing cards and seeing players react and figure out the strategy.”

This deck offers one other thing that is truly new: The environment and concept. Gadgetzan doesn’t look anything like this in the World of Warcraft massively multiplayer RPG, where it’s a small desert/port town.

“We have the freedom to deviate,” Travis said. “We can take what they gave us and that’s our starting point. We have more content that is Hearthstone-brewed than ever before; it’s separate, but inspired.”