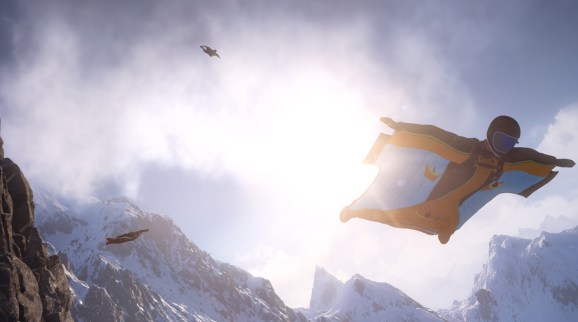 Ubisoft's Steep takes you into the French Alps.

The team at Ubisoft Annecy has lived in the shadows of the big mountains in Steep for a long time, and they’ve finally got a chance to depict the winter sports of those mountains in a lifelike experience that captures both the realism and the fantasy of extreme sports in the breathtaking environment of the French Alps.

Ubisoft’s Steep debuts on the Xbox One, PlayStation 4, and the PC on December 2. An early beta begins on Thursday and runs through November 14. I got a chance to try the game (as you can see in the videos embedded on this page) at a Ubisoft event held at the headquarters of action camera maker GoPro in San Mateo, Calif. I went into the preview expecting it to be a little boring, but it was actually really thrilling to play. You feel immersed in the cold environs of the mountains as you speed downhill and hear the sounds of wind whipping through your clothing. It feels more real than any other snow sports game I’ve played.

You can choose between four different sports: wingsuiting, skiing, snowboarding, and paragliding. In my view, the most spectacular and fun was wingsuiting, and the paragliding run that I did was boring by comparison because you are going so much slower. It took a little while to get used to each sport, but once I had finished that, I enjoyed the freedom to do anything I wanted on the mountains. You’ll find no story and no characters here. It’s just you and the mountain.

This game has amazing graphics. The technology behind the game is the same as Ubisoft used for its upcoming Ghost Recon: Wildlands game. That enables extremely realistic graphics of the mountain, the snow, the rocks, the trees, and the fog. You always see the avatar from a default third-person point of view, and that means you can see the wingsuit fabric filling with air and fluttering in the wind. The sun casts realistic shadows across the mountain, and lens flares can blind you when you glance in the sun’s direction.

You start out doing a tutorial that shows you all of the different sports and how to maneuver and score points for tricks. Then you are set loose on the mountain. You do have to complete a few recommended runs. But once you finish them, you can go anywhere you wish and slowly unlock the more difficult runs. The overhead mountain view looks great, and you can choose from hundreds of different paths, many of them procedurally generated. 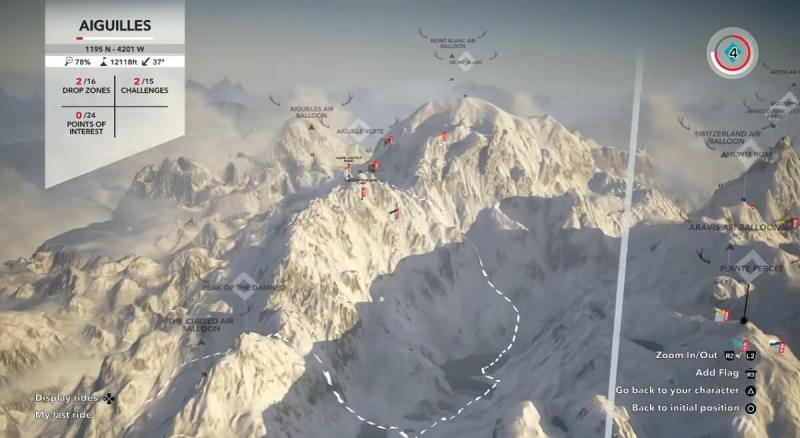 Above: The overhead map of Steep shows the different peaks and runs of the Alps.

“It’s part of our life — skiing, snowboarding, mountain sports,” said Arnaud Ragot, game director at Ubisoft Annecy. “It was just about waiting for a good opportunity to create Steep. At some point we had the technology and the team together. We saw a new trend around action sports, so decided to jump in.”

I really enjoyed the wingsuit competitions, where you dive down the mountain and try to score points by staying as close to the ground as possible. This means that a gust of wind or an unexpected rock can make you crash into the mountain and tumble like a rag doll down the slope.

Ragot said that the general shape of the mountains are realistically depicted. But each individual run has been created by Ubisoft’s game designers so that it will be fun, and not overly realistic. Making the runs fun is where Ubisoft draws the line on realism, and Ubisoft uses procedural generation to make it so the runs are very different.

Many of the places are accessible only via helicopter or long walks up the sheer face of the mountains. Thankfully, you don’t have to waste time walking up a lot of slopes. But when you do march through the snow, you can hear it crunching beneath your boots.

Some of the runs are truly spectacular. I played one called White Wings in a multiplayer wingsuit competition, which you can see at the 3-minute mark in the video below. (Sadly, my videos don’t have sound, which is a big part of the realistic experience).

In White Wings, you dive off a cliff and head toward the ground. It gets tougher when you have maneuver through narrow cracks in a gorge. Sometimes those gaps are only about five-feet wide, and so you have to concentrate on threading the needle.

If you get close to the ground, the game gives you a score for being so daring. But if you miscalculate and run into the ground, you don’t die. You simply hit the “try again” button and start your run all over. Your character cracks a joke about breaking a bunch of bones on that last run.

Ragot said the wingsuit competitions are based on real people who really do try to get as close to the ground as possible, though in carefully mapped sessions.

“We’ve never practiced with wingsuits ourselves, so working with wingsuiters helped us understand how it feels and sounds and looks. That was important to capturing that experience,” Ragot said. “Oh, yeah, we have a disclaimer at the beginning. Don’t try any of this at home.”

I practiced the White Wings run a bunch of times, and I was happy when I finally made it through and set a personal record. I was awarded a gold medal, and got 8,000 points. When you finish your wingsuit run, you just keeping going down the mountain until you pull the cord for your parachute.

You can even use a virtual GoPro camera in the competition to record your run. Then you can watch an instant replay of the run and change the view as you wish. You can then share it on social media. You can also set up a competition on the run and challenge your friends to beat your score. In the multiplayer run on White Wings, I thought my score was pretty good until the guy next to me scored an almost-perfect run of 22,000 points.

Next to wingsuits, I enjoyed the snowboarding sport a lot. I had fun going down the Glacier Hurdles run, trying to avoid rocks on the way down. The game has visual guides that tell you which gate you have to target next as you head down the mountain. The weather is dynamic, and you can play at any time of the day or night. During a night run, I was able to use a headlamp to light the way ahead.

The snowboarders can earn points by going over jumps and then spinning around in the air or grabbing their boards in various tricks. It’s a little easier to become competent in snowboarding, but it’s very hard to master. When you go straight down the mountain, the sense of speed is amazing. the landscape around you burs and the light glistens on the fresh powdery snow. Fortunately, you can get right up after a fall and keep going down the mountain. Or you can just hit the “try again” button and start over. The game reloads the run very quickly, so you can play over and over again.

Ragot said the team consulted with professional athletes to capture the flavor of each sport.

“I’ve traveled to these mountains depicted in the game, and it’s relatively close to reality for me,” said Samuel Luebke, a pro snowboarder, said in an interview with GamesBeat. “It feels awesome. I’ve been waiting for a game like this to come out for a long time. It’s great if you want to try new things out, like paragliding. I’m a gamer, and having more variety in the game makes it so it doesn’t get stale.”

Julia Mancuso, who won the Winter Olympics gold medal for giant slalom in 2006, said in an interview with GamesBeat that she thought the game is fun because it makes you superhuman and because you can be “creative with the mountain.” 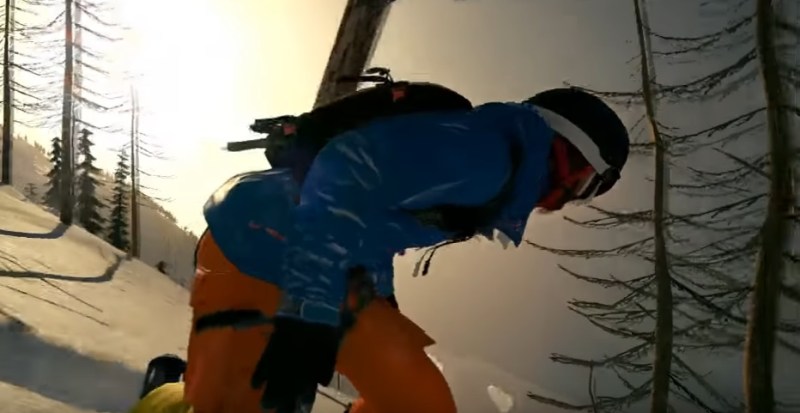 Above: You can snowboard in Steep and then share your recorded run.

“The difference between a video game and really doing it is hard to compare,” shes said. “When you don’t have the wind in your face, I feel like I’m going faster in the game. It’s scary how fast. With the wind in your face, it makes you feel calm. I feel totally normal going 100 miles per hour on skis. But this seems really fast.”

And it also worked with GoPro to integrate sharing. Adam Dornbush, head of global business development at GoPro Entertainment, said it’s all about recording your lines, capturing video from unique and authentic camera angles, and then sharing it with your friends.

“What was really important for us—when we started creating Steep, a big inspiration was all these super-cool videos people share online with their GoPro cameras,” said Ragot. “We wanted to offer players the same opportunity to do that in the game. When we were working with GoPro, we wanted to get the details right – how it sounds, how it looks – but also the spirit around that community, the different things people do with it. We wanted to speak directly to that GoPro generation.”

The GoPro integration shows up in the form of the GoPro name on helmets or wingsuits. I wouldn’t be surprised if people start sharing animated wingsuit runs on real GoPro channels at some point in the future. Dornbush said the two companies will collaborate on cross promotions in the future for Steep and GoPro products.

“Animated graphics would be new for us,” Dornbush said. “But this is an authentic enough experience that it could still be on GoPro. It’s amazing, passionate content that we are proud of, and we want to reward you for that.”