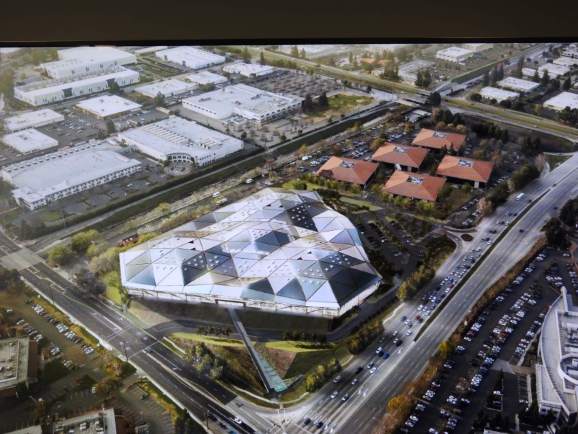 A concept rendering of Nvidia's headquarters.

Nvidia reported record revenues of $2 billion for the third fiscal quarter ended October 30, and it blew past Wall Street estimates for both revenues and earnings. Nvidia’s stock rose 13 percent in after-hours trading to $76.66 a share.

Nvidia is riding high on virtual reality, PC gaming, car computing, and artificial intelligence infrastructure. In the third quarter, GAAP earnings were 83 cents a share, up 89 percent from a year ago, on revenue of $2 billion (up 54 percent from last year). Analysts had expected 57 cents per share on revenues of $1.69 billion.

The Santa Clara, Calif.-based graphics chip maker is riding high on demand for its Pascal-based graphics processing units (GPUs) in VR machines and gaming computers, but it is also adapting those chips for servers used in A.I. processing for a variety of applications, including neural networks, driverless cars, and supercomputers.

“We had a breakout quarter — record revenue, record margins and record earnings were driven by strength across all product lines,” said Jen-Hsun Huang, founder and CEO of Nvidia, in a statement. “Our new Pascal GPUs are fully ramped and enjoying great success in gaming, VR, self-driving cars and datacenter A.I. computing.”

He added, “We have invested years of work and billions of dollars to advance deep learning. Our GPU deep learning platform runs every A.I. framework, and is available in cloud services from Amazon, IBM, Microsoft, and Alibaba, and in servers from every OEM. GPU deep learning has sparked a wave of innovations that will usher in the next era of computing.”

During the first nine months of fiscal 2017, Nvidia paid $509 million in share repurchases and $185 million in cash dividends. As a result, the company has returned an aggregate of $694 million to shareholders in the first nine months of the fiscal year. The company intends to return $1.0 billion to shareholders in fiscal 2017.

In an earnings call, Huang said, “The GPU is at a tipping point. It’s in the cloud, data center, computers. It’s no longer a niche component. It’s a large scale, mass available, general purpose computing platofrm. And A.I. is gaining ground broadly.”

Patrick Moorhead, analyst at Moor Insights & Strategy, said in an email, “Nvidia had a stellar quarter and the company is hitting on all cylinders. GPUs and Tegra were up a combined 54 percent YoY driven by huge increases in gaming, datacenter and automotive with steady progress from pro graphics. It’s hard to spot a hole right now in their lineup and as self-driving cars and machine learning become more popular, I believe Nvidia will just keep improving.”