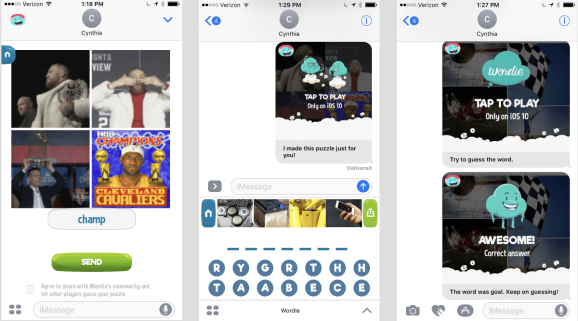 Screenshots of the latest version of Wordie, which allows users to create custom puzzles with images and GIFs

A new version of the smartphone game Wordie launched today, and it allows iOS users to create custom puzzles with images and GIFs from Giphy.

Custom puzzles can be sent to groups of friends or shared with the larger Wordie community through the Wordie iOS app or iMessage app extension. Custom puzzles will be added to the Android version of Wordie in the near future.

Each Wordie puzzle contains four images that have something in common. The first to identify the similarity and spell it out wins. A single puzzle can be sent to dozens of friends.

Wordie was created by mobile gaming company The Fast Mind and was one of the first games available since the iMessage App Store launched Sept. 13. The game has more than one million daily active users and has been downloaded more than 20 million times since its debut in iOS App Store in spring 2015.

“It was surprising for us to see that 25 percent [of U.S. players] only play through the iMessage platform,” The Fast Mind cofounder and CEO Jorge Prado told VentureBeat in a phone interview. 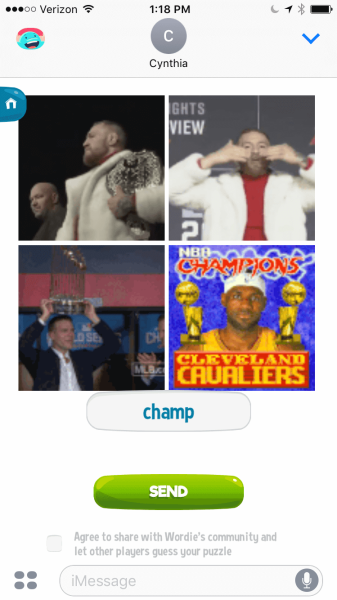 Above: What Wordie’s new visual puzzle creator looks like in iMessage

“When we saw this platform, we said ‘This is the right platform for our type of game, not for a car game or shooting game, not even a chess game, but good for our game,’” Prado said. “It’s perfect because it’s more of a community collaborative type of game.”

Group game play with games like Streak Trivia and Wordie allow people to play by themselves or in groups that can include dozens of people.

In Mexico and other Spanish-speaking countries where Wordie first gained popularity, before its iMessage app extension was created, users often shared screenshots of challenging puzzles with friends in iMessage or WhatsApp, Prado said.

User-generated puzzles don’t just add to the amount of puzzles available, but they also make them more current. For example, many puzzles on Wordie in the past week were related to the Cubs or Election Day, he said.

The Fast Mind team is based in Miami and has 14 employees.