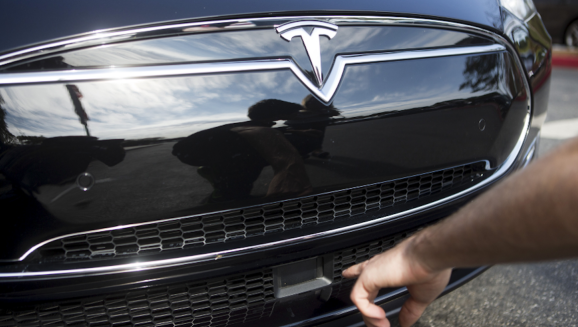 The radar technology of a Tesla Model S containing autopilot features is pointed out during a Tesla event in Palo Alto, California.

Tesla has responded to Germany’s request to stop using the word “autopilot” in its advertising, due to safety concerns, by carrying out a survey of Tesla owners in Germany. The company says that the overwhelming majority of customers it surveyed did not find the term confusing.

Last month, German transport minister Alexander Dobrindt had asked Tesla to stop using “autopilot” in its messaging, as he felt the term implied that drivers could operate their vehicles without applying their attention to the roads. Tesla responded by saying that “autopilot” has been used in aerospace for a long time to describe a system that works in conjunction with a human operator. “Just as in an airplane, when used properly, autopilot reduces driver workload and provides an added layer of safety when compared to purely manual driving,” a spokesperson said at the time.

Without divulging exact numbers, Tesla now says that it has “worked with a third party” to survey owners of its cars in Germany to “better understand how they perceive Autopilot.” The company found that 98 percent of those surveyed “understand that when using Autopilot, the driver is expected to maintain control of the vehicle at all times.”

For the uninitiated, Tesla autopilot is a semi-autonomous “driver assist” feature that was first introduced with the company’s Model S cars, and later added to other vehicles. Though all Tesla cars produced after September 2014 have the necessary hardware to enable autopilot, the software is an additional $3,000 add-on for those who opt in. A $5,000 add-on that offers an enhanced autopilot with more cameras is also available. The technology can automate speed, steering, parking, and lane changes, though drivers are required to be on hand to take over, should the situation require it.

Tesla hit the headlines earlier this year after the first known fatality relating to its autopilot feature was made known. The driver was killed after the Model S car hit a large tractor-trailer, with Tesla revealing the circumstances that led to it: “Neither autopilot nor the driver noticed the white side of the tractor-trailer against a brightly lit sky, so the brake was not applied,” it said.

The company recently revealed that autopilot had clocked more than 200 million miles around the world. But it’s clear there are still concerns that autonomous — or semi-autonomous — cars aren’t ready for prime time, and this is something that Tesla and other automobile and technology companies are seeking to address by increasing road-testing and, it seems, carrying out surveys.