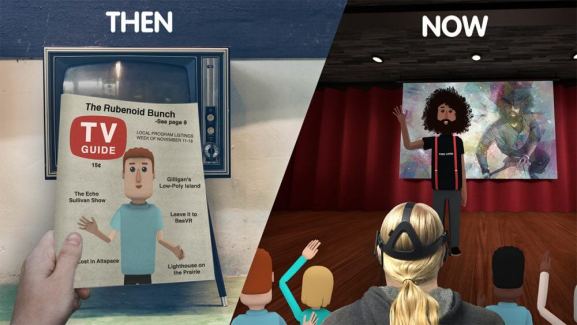 Bruce Wooden is debuting a new feature for social VR platform, AltSpaceVR. To introduce it, he needs help from a guest. He motions to a set of doors that open, and in walks none other than Bruce Wooden.

The AltSpace developer was showcasing VR Capture, a means of recording performances within the app and then playing them back. The first Wooden was really a recording he had taken earlier, and the second was the real man in the virtual flesh. VR Capture recorded his avatar’s movements and voice, making the recording indistinguishable from a live avatar, unless of course you were to try and interrupt them.

It’s a feature we haven’t yet seen from other social VR applications, but could become an important piece of the puzzle as we move more of ourselves into virtual spaces.

For AltSpace as a platform, this means that regular live shows like the stand up comedy sessions hosted by Reggie Watts can now be recorded so that you won’t have to attend live, you can watch them back at another scheduled time. VR Capture will first be available to content creation partners like Watts and for special events; the team isn’t talking about availability for everyone just yet.

We hope that support does arrive soon though; imagine making a one-man play, for example, or recording your virtual reactions to video content. There are no limits to how many people can watch a recording, and users can move about the space during playback, just like they could if it was happening live.

The feature doesn’t require an additional hardware or software, and offers immediate playback. Recordings are streamed from the cloud.