Video calling has been widely expected on WhatsApp for some time, and some beta users on Android have reported seeing the option in the wild over the past month as the company tested and tweaked the feature ahead of prime time. Now the company has revealed that the feature will be arriving for everyone on Android, Windows Phone, and iOS through an app update arriving “in the coming days.”

You’ll know you have the new feature when you tap on the call icon in a conversation and you see two options — one for voice call and one for video call. 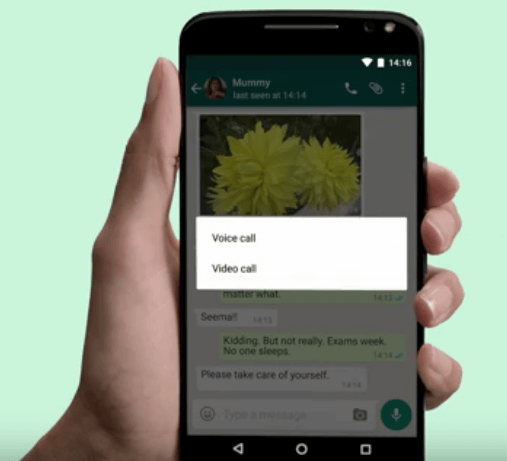 A WhatsApp spokesperson has confirmed to VentureBeat that video calling will work on both the front- and rear-facing cameras, meaning you can easily switch the view that your friends and family see when chatting to you. It also works in landscape and portrait modes, and you can multi-task as the video can be minimized to let you check and respond to other messages you receive. We’re also assured that WhatsApp’s end-to-end encryption applies to video calls.

You’ll also be happy to know that video calls will work across cellular connections, but if you were hoping to be able to make group video calls as you can with Skype, well, this isn’t something that’s in the pipeline.

Since Facebook shelled out some $20 billion for WhatsApp back in 2014, the app has grown from 450 million monthly users to more than one billion, and it is one of the world’s most popular messaging apps, alongside Facebook’s own Messenger.

WhatsApp has offered voice calls since March 2015 and recently revealed that 100 million calls are made each day through the app, so it really was only a matter of time before video calls were added to the mix. “We’re introducing this feature because we know that sometimes voice and text just aren’t enough,” the company said in a statement. “There’s no substitute for watching your grandchild take her first steps, or seeing your daughter’s face while she’s studying abroad. And we want to make these features available to everyone, not just those who can afford the most expensive new phones or live in countries with the best cellular networks.”

Ushering in video calls really is a no-brainer for WhatsApp, as the move gives people less of a reason to use the myriad other services that offer video calling, including well-established brands such as Microsoft-owned Skype, Apple’s FaceTime, and Facebook Messenger, not to mention relative newcomers like Wire. Indeed, why would WhatsApp allow its billion-plus users to message and call each other but require them to use Skype or FaceTime for video calls?

Today’s news comes three months after Google launched a standalone video-calling app called Duo, so there really is no shortage of competitors out there already, but what WhatsApp has over nearly every other app is existing mindshare and traction. This is a major launch, one that could put a dent into Microsoft and Apple’s respective services.

While video makes a great deal of sense for WhatsApp, there are key issues it must address if it’s to maximize the feature’s success. As things stand, WhatsApp is tethered to your phone number, meaning you can really only have one smartphone at a time tied to the service, while tablets, computers, and TVs remain out of bounds. There is a desktop version of WhatsApp, but it’s basically a mirror of the smartphone version.

WhatsApp really needs a true cross-platform presence that extends beyond mobile phones — after all, video calls are far more engaging on a big screen.

Meanwhile, check out WhatsApp’s brief demo video on how to use the new video-calling feature.