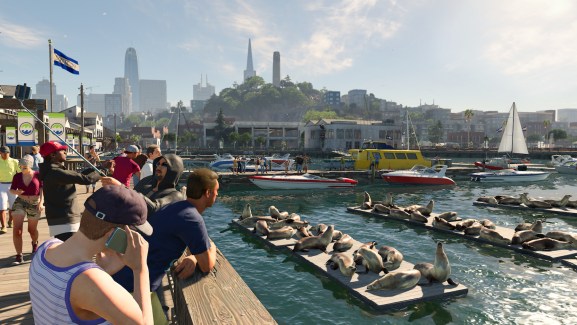 The fresh air of Fisherman's Wharf in Watch Dogs 2.

Watch Dogs 2 is rated M for Mature, but it still decided to remove some adult-themed material.

Ubisoft has confirmed to GamesBeat that it is removing a texture that explicitly depicts a woman’s vagina in Watch Dogs 2. Up until this point, the open-world hacking game featured at least one nonplayer character who is not wearing any clothing over her genitals. Players are stumbling across this while playing through Watch Dogs 2. Sony even banned someone from using the PlayStation Network after they shared a screenshot of the exposed genitalia using the PlayStation 4’s built-in social features.

“We’re aware that one of the NPC models in Watch Dogs 2 is rendered in a way that is particularly explicit,” an Ubisoft spokesperson said in a statement. “While Watch Dogs 2 is a mature-rated game, we apologize and will update this NPC model to make it more consistent with other NPC models in the game in a patch to be released this week. We also are working with our first-party partners to ensure that players can continue to play and share all content from the game within the bounds of the first parties’ respective codes of conduct.”

Gaming has a slightly stunted relationship with nudity and sexual content, but this is not the first time human reproductive organs have made it into a video game. In 2010, developer Rockstar Games included a brief scene with full-frontal male nudity that didn’t shy away from showing the character’s penis. Players even claim that Ubisoft included textures for women’s genitals in its Far Cry: Primal prehistoric action adventure earlier this year.

But Ubisoft changing this texture is probably for the best because the image that is floating around showing it off (see it here and keep in mind it is NSFW) is actually far more upsetting because the exposed character is deceased. That combines the nudity with violence in a way that might make a lot of people uncomfortable.