Backward compatibility with a huge chunk of the Xbox 360 library is one of the Xbox One’s best features, and now Microsoft wants to highlight that capability at retailers. 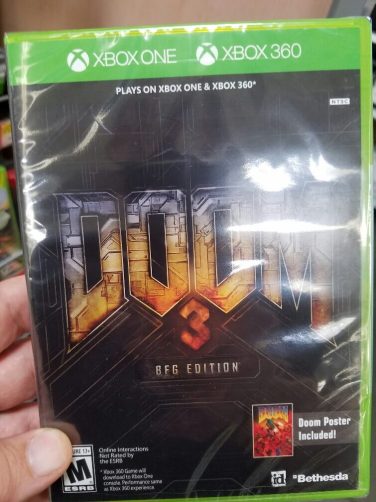 Above: Now your Xbox 360 games will fit in on your Xbox One game shelf.

Certain backward-compatible Xbox 360 games are now shipping in Xbox One cases that list both the Xbox One and Xbox 360 where you would normally only find the latter. This is Microsoft’s way of clearly presenting one of its console’s biggest value propositions — that a lot of your old games are going to work if you buy an Xbox One this holiday — to consumers. A member of the NeoGAF message board of dedicated gamers shared the images after spotting the new cases for games like Doom 3: BFG Edition and Fallout 3 at Walmart.

In addition to the dual Xbox-system logos, the box art also clearly states that Doom 3 “plays on Xbox One & Xbox 360.” In smaller font, the case points out that you’ll still have to install the game on your Xbox One, but that’s its only fine print. This likely means that the disc includes an update for the Xbox One that introduces the backward-compatibility functionality. Systems sold throughout 2013 and 2014 that have not connected to the internet (a small fraction of overall units sold) would not have the proper code to handle this game. But since the game doesn’t note the need for an internet connection, it likely contains the required patch.

This is a really clever move for Microsoft. The company has started to make up some ground in the United States after falling behind Sony’s PlayStation 4 through the first 2.5 years. And this holiday is going to play a crucial part in determining the long-term legacy of the Xbox One. By leaning hard into a feature that should speak to the legion of fans who already own an Xbox 360, Microsoft could gain a strategic edge that will help it remain competitive.

And while this is a smart and subtle marketing move, I think the biggest sign that Microsoft leadership is savvy to what its gaming consumers want is that your new Xbox 360 purchases will now fit in perfectly on the shelf with your Xbox One library.