EA posted an update on its German blog today that explains its requirements for the influencers it works with on YouTube, Twitch, and other sites. The company wants these personalities to fully disclose if they are collaborating with the publisher in any way. EA goes into detail about what it expects, and that includes revealing the nature of the partnership in any content shared on social media. Many of these EA policies are variations on rules that the United States Federal Communications Commission has laid out for online personalities that present themselves as regular people online but are actually receiving free products or compensation. Recently, publisher Warner Bros. settled with the FCC over its sponsorship deals with creators like PewDiePie, and EA is trying to avoid that fate itself.

I asked Electronic Arts if these rules apply to its influencers around the world, and it explained that they do — although specific requirements may vary by region.

The EA rules break down into two basic categories. The first is “Supported by EA,” which applies to influencers who have received free products, paid travel, or access to press events. This group will must tag their content with #supportedbyEA. The other category is full advertisements. This is where EA explicitly pays a content creator to play or promote a game. For these relationships, EA wants its partners using a tag that reads #advertisement. Those tags must appear in any messages related to the EA games on Facebook, Twitter, and elsewhere.

Additionally, whether an influencer is #supportedbyEA or an #advertisement, they need to include an audio message at the beginning of their video indicating that or one of these watermarks in a clearly visible spot near the start of the clip: 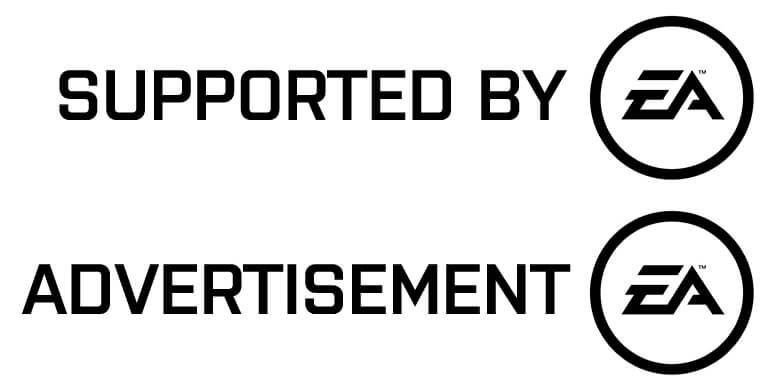 Above: Now you’re ready to influence the hell outta some suckers.

Getting these rules in place should help EA and its influencer partners avoid negative confrontations with the FCC. They should also help consumers better understand when a corporation is trying to market to them. If you’re wondering how this affects traditional news sites like GamesBeat, the answer is that it doesn’t. EA’s guidelines specifically apply to people who don’t make it clear that it’s their daily job to report on and critic the gaming business.

The FCC believes that most people understand that critics get access to movies, music, performances, and games as part of doing their daily work, so you are already taking that into account when you read our stuff. But you might not know that you should take that into account if some random dweeb in a leather jacket on YouTube doesn’t make it clear that he has a relationship with the companies he is covering.