Twitter’s chief executive has apologized after at least one white supremacy ad surfaced on the platform. Jack Dorsey tweeted that a “mistake” had been made and blamed his company’s automated system for failing to flag the ad. “We did a retro and fixed!” he exclaimed.

Earlier this week, Motherboard reported that white supremacists were using Promoted Tweets to further their message around hate. This certainly puts a bit of egg on Twitter’s face as it seeks to rebuild confidence among users that it can properly defend them against harassment. 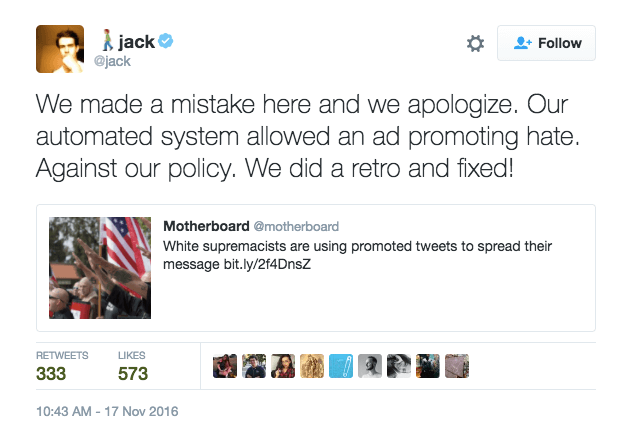 Musician and writer Ariana Lenarsky tweeted that she encountered ads created from an account belonging to a neo-Nazi organization called New Order. Her discovery came hours after Twitter unveiled updates to its enforcement and privacy tools that it promised would come following the U.S. elections a week ago. Twitter has since removed and suspended the account and ad.

However, it calls into question whether the company is up to the task of preventing future occurrences. Of course this could have been a one-off mistake, a glitch in the system if you will, but with a society filled with enormous hate right now, Twitter can’t afford to have these things take place. It has more to prove and should be doing better.