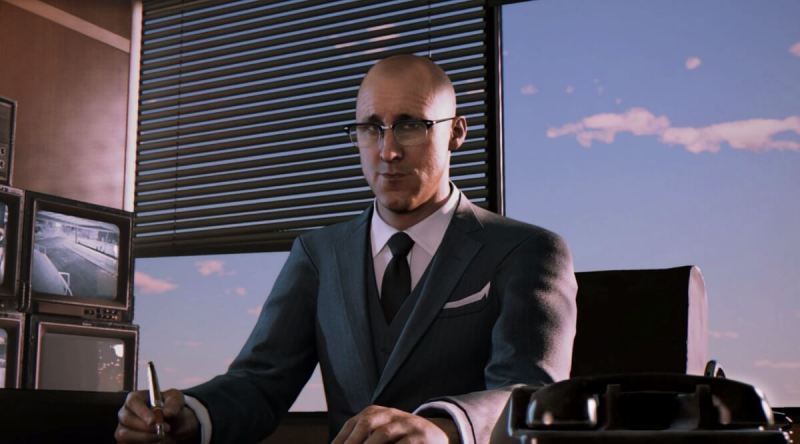 Above: Tony Derazio stands in the way of Mafia III’s anti-hero Lincoln Clay.

GamesBeat: The look of the game is very different from Mafia II. What are some of the things you upgraded in comparison?

Blackman: We redid a lot of our streaming technology. We redid a lot of our lighting model, the way the world is lit. Obviously as the consoles have gotten more powerful we can push more assets across the board. We redid the way we do our textures to some degree. Some of it is just a factor of the art direction changing a bit, trying to capture a different time period, and the location as well. Our version of New Orleans is very different from Empire Bay in Mafia II. But a lot of it was just adapting to the new consoles and taking advantage of what the new hardware can do.

GamesBeat: Did that bring more of a challenge as far as having to develop and test new technology?

Blackman: Oh, for sure. That’s always the tradeoff you make. This is our first game as a studio. Most of us had never worked together before. We’re going to make mistakes along the way as we learn how to work together.

It’s the same with the technology. On the tools side, this is the first time most of the content creators are using these tools. It takes a little while to master them and understand the ins and outs. We got more efficient over time. But with pieces of technology — the renderer, for example – there were decisions we made along the way that we had to go back and revisit as the game got larger.

There’s always going to be a difference between testing with a couple of hundred people and testing with millions of players. Things get discovered in that process. We’ve been cognizant of that and trying to react quickly, especially when game-breaking bugs have cropped up. It’s a good foundation to move forward. We have a stable base to build from and next time out we can make sure that these issues are resolved.

GamesBeat: Was development fairly continuous, or did you have to reboot or restart during the process?

Blackman: There were some ideas for a Mafia III that were kicked around before I started, but in general, once I came on board and Bill came on board and we solidified the core vision around the time, the place, and Lincoln as a main character, it was pretty continuous from that point on.

Obviously there were moments where we had to take a step back and evaluate what we were doing and revisit certain aspects of the game. There were moments when we had shift focus a bit because a tool wasn’t ready or the design was getting ahead of the technology. Like I say, the train was about to run out of track and we had to pause for a minute to take stock. But in general, it was a pretty consistent pace.

Above: Lincoln Clay and Thomas Burke in Mafia III

GamesBeat: Bill, on the story side, what was that evolution like?

Harms: When you start off you explore different basic story ideas. Who’s the main character? Where’s the game set? What year is it? Those things are really linked. Whenever we changed one we’d have to re-examine the other two. But once we settled on 1968, New Orleans, and Lincoln Clay, we moved forward from that point fairly smoothly.

We had an off-site for about three weeks, renting a conference room in a hotel across the highway. There were eight or nine of us and we mapped out the entire game on a bunch of whiteboards. All of that was transferred to a format we could share with the rest of the team. The structure, by and large — about 70-75 percent of that stuck over the course of development. It was great to have that backbone in place, what the overall game was going to be, fairly early on, so everyone had a focal point to look to.

GamesBeat: It turned out to be very interesting in that it seems like a linear story, but you can go through the open world and experience that any way you like.

Blackman: Letting the player go through the game and determine the path by which they take down Marcano — we supported that all across the game. After you kill a capo, for example, you get a scene where Marcano reacts. There are actually nine of those scenes that we filmed and created to reflect the order in which the player played the game. In any given playthrough you’ll only see three.

The sitdowns, obviously, were designed to fully support player choice. We had thousands of lines for the sitdowns where the characters remember the choices you made and respond to them. The player has a clear idea – hey, Vito is getting close to betraying me, so do I let him do that, or do I give him the next district? That was always very clear to the player, that their choices had weight and consequence to them.

GamesBeat: Have you found that some players are replaying to get a different result?

Blackman: Yeah, for sure. We see that a lot, especially on Twitter. “Hey, I finished this playthrough and kept all three of the underbosses alive. I’ll try again and give everything to Burke and see what happens.” 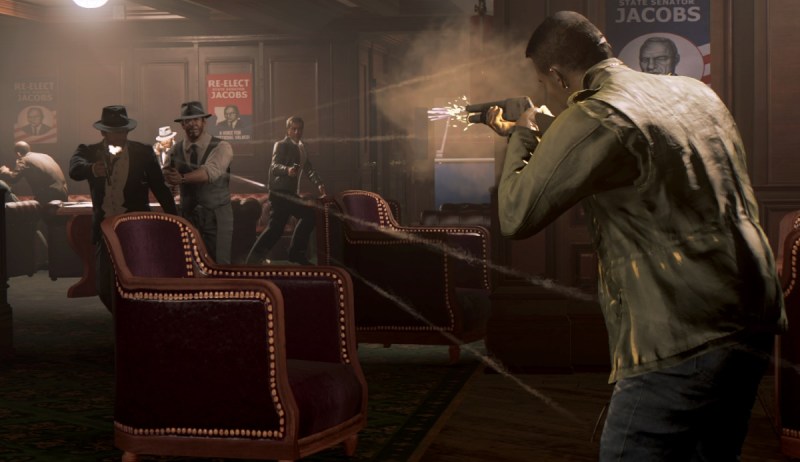 Above: Lincoln Clay in a shootout in Mafia III

GamesBeat: I found the notion you talked about last time a bit plausible — that Lincoln didn’t want to just go straight to Marcano. He wanted to dismantle the empire.

Harms: Right. That’s not much of a story. Lincoln recovers, Donovan hands him a shotgun, the end. [laughs] But all joking aside, that kind of structure, the way Lincoln approaches it, is a reflection of who he is as a character. He’s obviously a criminal. He was a criminal before he went to Vietnam, because he lived with Sammy and Sammy’s a criminal. But it’s in Vietnam where he learned a methodical way of approaching your enemy. He takes a very calculated, systematic approach – not only to making Marcano watch his empire crumble, but also to make him watch Lincoln build his own empire from those ashes.

GamesBeat: It seemed like, in that part, if you knew a bit of background about the Phoenix Project you could understand him more.

Harms: Yeah, there are some light references to that. There’s a scene where Donovan and Lincoln are talking about going after Enzo, and Donovan says, “Well, if that doesn’t work, you can always do the Manila Hangman,” which is our name for something pretty horrible that was part of the Phoenix Project. As Donovan mentions in the hearings, and then Maguire makes a big point of mentioning, Lincoln was trained in psychological warfare. As soon as you kill Richie Doucette, you cut to Maguire explaining that this is what Lincoln learned in Vietnam. His goal is to terrify these guys.

GamesBeat: Some of the lines in the dialogue are very powerful, very resonant. You get the feeling that he’s on the road to hell, and that he realizes he can’t go back to being somebody else.

Harms: It partially speaks to who Lincoln is as a character. He’s an orphan. He’s a guy who’s never really had much. What little he did have was taken from him. To a guy like Lincoln, he won’t let that stand. There will be a reckoning because of that.

It reflects in the end, too. Father James makes that impassioned speech to Lincoln saying, “When you got home, you were going to leave town. You can still do that.” Even at the very end, we let the player make a final determination of who Lincoln is. Does he leave town, or does he stay and rule the city?

GamesBeat: That seems to be where the history makes sense. It’s a troubled time, hints of revolution, bad things happening. If you rebel against evil, that’s not necessarily an evil thing to do.

Harms: One of the pillars of the franchise – Haden has talked about this — is taking a gifted anti-hero and putting them in a specific time and place. I fully believe that Lincoln falls into that. But again, we let the player, as much as possible, have agency around who their version of Lincoln is, if they want to explore and push further in one direction or another. 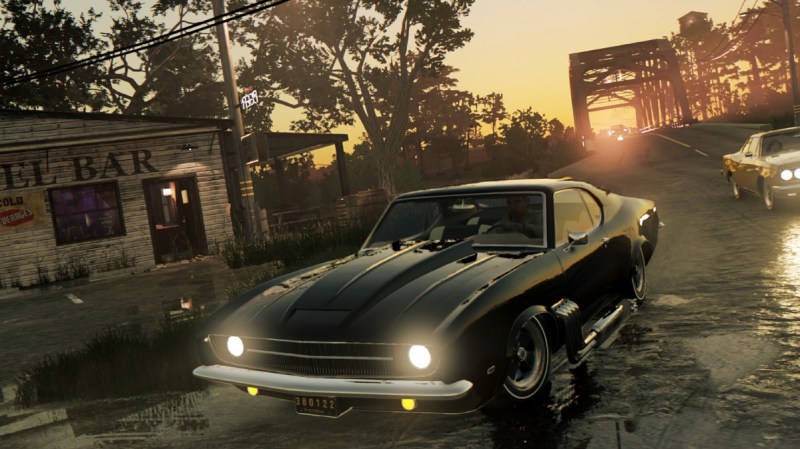 GamesBeat: I chose to go off to new things, to not stay. But I’m kind of curious as to what percentage of the whole I fall into.

Harms: So far there’s a pretty even split between people that decide to leave town and people who decide to stay and rule. Surprisingly, and maybe this is heartening, only a small percentage of players actually choose to betray everyone and rule the city alone. That’s something we put in there, again, to give a sense of agency.

As far as how people deal with their lieutenants, it’s a mix. Probably half of players are trying to keep all three of them happy throughout the entire game. If players are favoring one or the other, it’s still a pretty even split.

GamesBeat: What role did the studio play in changing or embracing the story as needed?

Blackman: It was kind of developed all together. Bill was hired very early on. Most of the early creative work, from a content standpoint, was Bill and I talking about what we wanted to do and what type of story we wanted to tell, what time we wanted, what city we wanted. We brought other people into the fold. The art director, design director, tech director, executive producer, a handful of others, they were all part of that off-site.

It was very much a collaboration across all the disciplines, which — I think more and more, we have to see that in the games industry. I feel like we pay a lot of lip service to the idea that narrative and gameplay design evolve hand in hand, but the vast majority of the time that’s not true. Usually narrative is an afterthought once the game design is determined. Here it was a partnership from day one. Even the core concepts of who you are, where you are, that was driven by conversations between myself and Bill and bringing the other directors in.