Chinese ride-hailing giant Didi Chuxing (Didi) is the latest company to embrace AMBER alerts for missing children, following the launch of the system in China back in May with internet behemoth Alibaba. 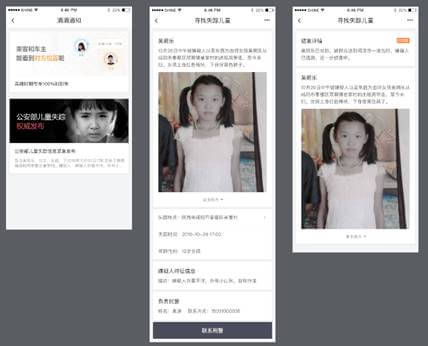 A product of the National Center for Missing & Exploited Children (NCMEC), AMBER alerts were first introduced in the U.S. in 1996, following the murder of nine-year-old Amber Hagerman.

AMBER alerts are typically broadcast across numerous mediums, including TV and radio, and the system has helped recover 772 children in the U.S. alone since its launch two decades ago. With smartphones in billions of pockets around the world, the internet offers a particularly valuable means of extending AMBER alerts — Uber signed up the program last year, while Google has integrated AMBER alerts into its products for a while already, as have Facebook and Microsoft.

The Didi Chuxing brand emerged in early 2015, following a merger between local rivals Didi Dache and Kuaidi Dache, and today offers myriad smartphone-based car services, including taxis, carpooling, and premium cars with drivers. With more than 400 million riders, Didi is the market leader in China by some distance. Back in July, Uber raised the white flag on its solo China mission and agreed to merge its Chinese operations with Didi in a $35 billion deal. This followed a mammoth $7.3 billion funding round by Didi, a pot to which Apple contributed a cool $1 billion.

China’s AMBER alert system was launched back in May, initially as a joint project between the Ministry of Public Security (MPS) and Alibaba, and is operated by more than 5,000 police officers across China. Once a missing child is reported, the authorities upload the relevant information, including a photo, to the official “Tuan Yuan/Reunion” platform, and Didi sends an alert with key information about the case to riders close to the child’s last known location. Within the first hour of a child being reported missing, all riders within a 100 kilometers radius will receive an alert, and this radius expands to 200 km and 300 km in the second and third hours after.

In addition to Didi Chuxing, other internet platform expected to join the AMBER alert program include Sina Weibo, Alipay, and Tencent QQ.